Board of Trustees votes against $5.125 million funding shift to SIUE 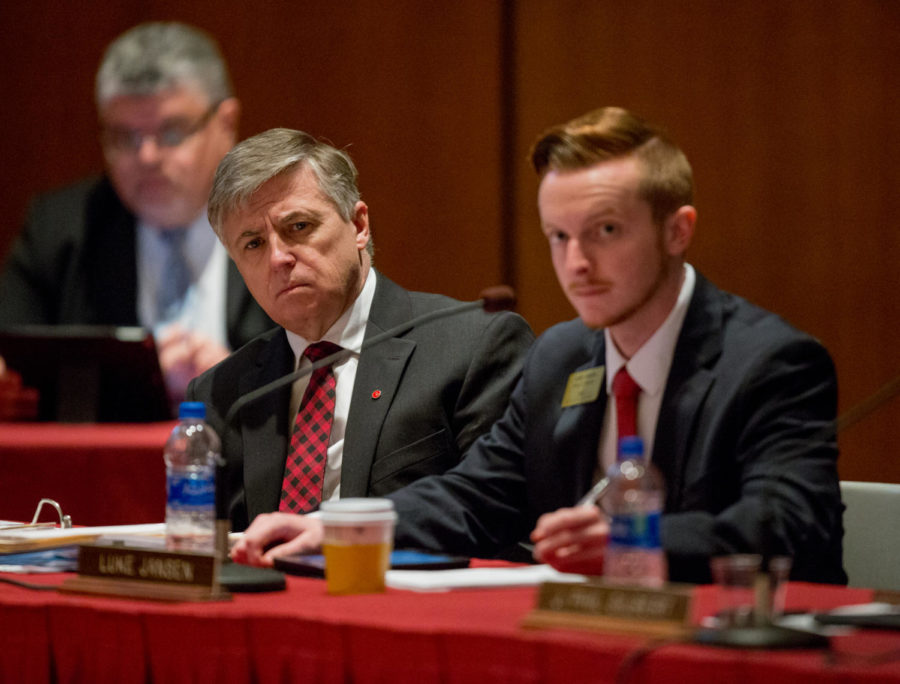 SIU Edwardsville chancellor Randy Pembrook listens in to commentary on the proposed $5.125 million shift in funds from the Carbondale campus to the Edwardsville campus Thursday, April 12, 2018, during the SIU Board of Trustee meeting in the student center. (Brian Munoz | @BrianMMunoz)

The Board of Trustees voted Thursday against the reallocation of state funds to the Edwardsville campus.

The board member votes are as follows:

“I am going to vote against this proposal but I want the people – faculty, staff and students at SIUE to understand this is not a vote against SIU Edwardsville,” trustee Phil Gilbert said. “As I said yesterday, I am not opposed to looking at the reallocation of funding.”

Gilbert said he is in favor of Edwardsville getting their fair share in state funding, but had a problem with the timing of the proposal.

The proposed reallocation was first brought to the board on March 9 and was added to Wednesday’s meeting agenda the week of March 19.

Chancellor Carlo Montemagno said he was told about the proposal on March 21.

Newly appointed board member Tom Britton said he would be voting against the proposal as well.

“I believe I will be voting against it. My principle concern is the speed it is being implemented and the process that we’ve learned about this – it needs to be a systemwide review of activity,” Britton said. “We need to make sure we are not dividing and pivoting the two campuses against each other.”

Trustee Shirley Portwood said she would be voting for the shifting of funds.

“In all fairness to the Edwardsville campus, they do deserve a reallocation,” Portwood said.

Portwood mentioned the board voted to loan $35 million from SIUE to SIUC in a similar amount of time, correlating to the disagreement that arose at Wednesday’s working board meeting on whether or not the Carbondale campus trustees and administrators were allowed adequate time for reviewing the agenda matter.

“I note that when the question came up of loaning money from Edwardsville to Carbondale all except one trustee was willing to do it on two days notice,” Portwood said.

“This idea that we can’t decide things in ten days is kinda hard to imagine,” Portwood said.

Board’s discussion of the funding shift on Wednesday, April 11

During the working Board of Trustees meeting on Wednesday, some board members questioned the speed at which the proposal was brought to the table to vote on.

“We have not had any discussions about this,” Joel Sambursky, secretary of the Board of Trustees said. “We haven’t analyzed it, we haven’t reviewed it. The only discussion we’ve had in the 4 years I’ve been on this board is about rolling up our sleeves and really looking into this.”

SIU President Randy Dunn said after the board agreed to look into the idea of shifting funds on March 9 there had been outreach from the Edwardsville campus.

“During board sign off week, there was some early discussion about whether we would go forward or not,” Dunn said. “At that time they were still working on their data.”

SIU Board of Trustees’ sign-off week was the week of March 19.

Dunn said Carbondale was given the indication the reallocation matter would be on the agenda for the Board of Trustees meeting on April 12 during the sign-off week.

The proposal is primarily an acknowledgment and an adjustment that considers enrollment has become substantially equal between the two campuses, Dunn said.

“It acknowledges the fact that Edwardsville campus has not had a fair shake in that regard,” Dunn said. “You have this question of equity.”

Gilbert asked the board on Wednesday, why there was a need for the board to vote on it now?

“Every year we wait to not make that adjustment is a year where we think we could have used those funds,” SIUE Chancellor Randy Pembrook said. “We think that after 18 years, it is time to do something.”

What’s to come after the board voted against the shifting of funds?

Dunn said during a press conference after Thursday’s regular meeting, the board would continue to look for an external consultant to form the model reallocation of state funds.

“There will be no other adjustment until what time it would come back to the board,” Dunn said.

“The board feels more information would be helpful, and that will be the next step,” Pembrook said.

“Fall of ‘18 will be the time when the enrollment lines cross and Edwardsville has a higher headcount,” Pembrook said. “If you’re not going to try address it now, when will we do it?”

The agenda item today proposed a formula model using enrollment as the main driver but could include other factors.

Enrollment between the Edwardsville and Carbondale campuses have changed dramatically, Pembrook said.

When enrollment passes the 50-50 mark, Pembrook said Edwardsville thought it was logical time for the board to discuss the apportioned state allotments.

Dunn said he would use his administrative authority to move forward as quickly as possible getting an external consultant to work on creating a new formula model for state funding.

In an email sent to Edwardsville students obtained by the Daily Egyptian on April 12, Pembrook said State Representative Jay Hoffman, who represents SIUE’s district, will introduce legislation that would create separate Board of Trustee boards at Carbondale and Edwardsville.

“The legislation would also shift the current allocation conversation from the SIU Board of Trustees to the Illinois legislature,” Pembrook said in the email.

Additionally at the meeting, the board approved funding the packaging and transportation of Montemagno’s laboratory equipment, including related research materials from the University of Alberta.

Meera Komarraju’s appointment to become the university’s Interim Provost and Vice Chancellor for Academic Affairs was approved by the board.