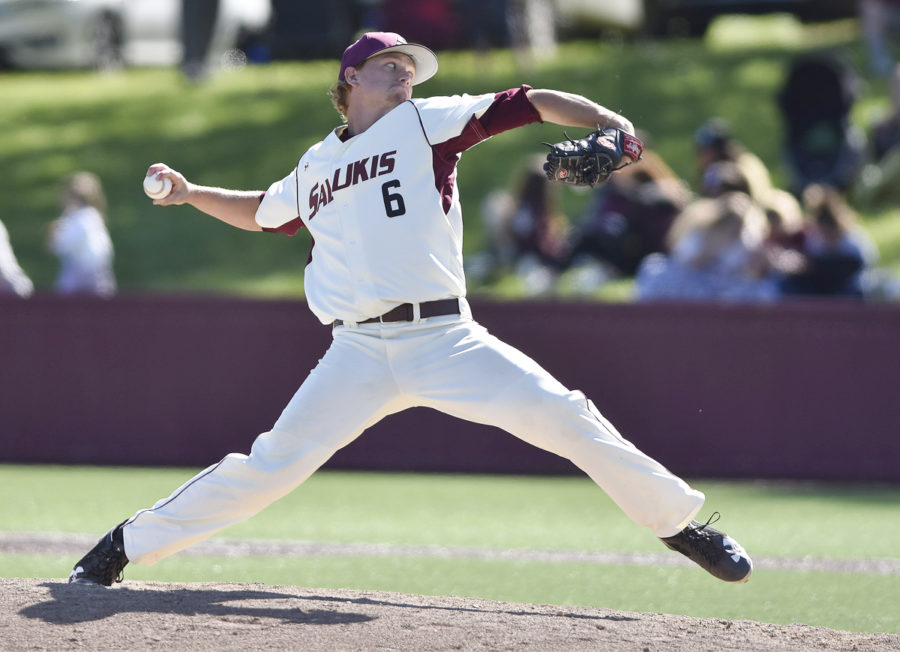 Senior closer Ryan Netemeyer, SIU’s record-breaking closing pitcher, is the superhero of the team saving games when the team is in need.

Reigning from Belleville, Netemeyer said he has been an outdoorsman his whole life and enjoys outdoor activities such as fishing, hiking and kayaking.

However, the competitiveness of baseball is what he said drew him to the game.

“I alway liked [baseball] and the competition involved in it,” Netemeyer said. “There’s also no time limit and I always liked that aspect of the game.”

“It was always cool,” he said. “I got to see people like Mike Trout play before they were big and it was really fun.”

With the level of success his relatives had before him, Netemeyer said he still did not feel pressure to perform on the same level.

“I’m my own person,” Netemeyer said. “I write my own storybook.”

Growing up playing baseball with his dad coaching him along the way, Netemeyer said that while he did want to play the field at one point, he always wanted to pitch because of the level of involvement in the position.

“Pitching is just more fun because you’re always in the game,” the Saluki closer said. “You’re not sitting back waiting for something to happen, rather, you’re the one dealing the hand.”

In high school, Netemeyer spent his career as a starting pitcher at Mascoutah High School. There he earned several honors in his four years including All-State, All-Area, All-Conference and a nod as an Under Armour Preseason All-American.

Despite the awards he added to his trophy case, the Belleville native said his favorite high school memory was winning sectionals for the first time his senior year.

Coming out of high school, Netemeyer received various scholarship offers including SEMO and Arkansas State but said he chose SIU because it was the ideal distance from his hometown and felt like the right fit.

“It was real clear cut that I was going to go here,” Netemeyer said. “I liked the coaches and the area. It was an easy decision for me.”

During his transition to Division I, Netemeyer said that the biggest adjustment was the increased speed of the game and pitching to more advanced hitters.

“The game is a lot faster and you have to learn how to slow it down,” the senior said. “You have to make it to where you’re throwing your best stuff every time and sometimes you just have to tip your cap.”

In his first season at SIU, Netemeyer did not expect to make the transition to the bullpen. Instead of being disappointed about not starting, he welcomed the idea of being used as a reliever.

“I just knew I was going to be pitching,” Netemeyer said. “I took every opportunity I could.”

In his freshman season at Southern, the newly-transitioned reliever posted a 7.04 ERA with an opponent batting average of .283. He finished with a 1-4 record in 19 appearances but was not satisfied with his first campaign in the bullpen.

“That was a rough year,” Netemeyer said. “It was a good learning curve, though. It showed me what I needed to do.”

In his sophomore year, he improved tremendously as he spun a 1.95 ERA with an opponent batting average of .208. He secured 12 saves, second-best in the Missouri Valley Conference, and earned Second-Team All-MVC.

With a better understanding of how to pitch at the D-I level, Netemeyer said his honors did not excite him all that much.

“I don’t really hang my hat on awards like that,” Netemeyer said. “It is cool to get recognized, though.”

As a junior he earned a school-best 15 saves and received recognition as a semifinalist for National Pitcher of the Year and NCBWA’s Stopper of the Year.

So far in his senior campaign, Netemeyer has struggled with a 6.75 ERA and a 0-2 record with four saves.

“It’s frustrating to let your team down,” Netemeyer said. “You don’t want to be that guy, you want to be the guy that goes in there and gets the win.”

Although he suffered some tough luck earlier in the season, Netemeyer nailed down his 32nd career save, the most in SIU baseball history.

“It’s definitely something I’m proud of,” the closer said. “A lot went into it and I owe a lot to my coaches.”

Pitching coach P.J. Finigan said he thinks Netemeyer’s chance to break the saves record might have affected his performance early in the season.

“I think he was pressing just because he knew how close he was to the record,” Finigan said. “We didn’t give him a lot of opportunities early on and when he finally got one, I think he was just antsy.”

Even when down on his luck, according to his coaches and teammates in the bullpen, Netemeyer has been a great leader and role model.

“He’s taught me a lot,” freshman reliever Trey McDaniel said. “He’s a great guy and he’s got some big shoes to fill.”

In his last season, the closer said he wants to thank the program and the coaches around him.

“I owe a lot to the coaches here and everything they have done for me,” Netemeyer said. “This program is really going in the right direction.”

Like the rest of his team, Netemeyer said he wants nothing more than to win the MVC and go deep into the postseason. Along with the goals for this season, he said hopes to get drafted by a Major League organization.

The Saluki coaching staff has full confidence in Netemeyer reaching the professional level.

“He deserves to play,” head coach Ken Henderson said. “People know about him and they know what he can do.”

Henderson said it takes a special person to do what Netemeyer can do.

“Every time he goes out there, the game is on the line,” Henderson said. “It takes a pretty special person with a good makeup to do what he does.”