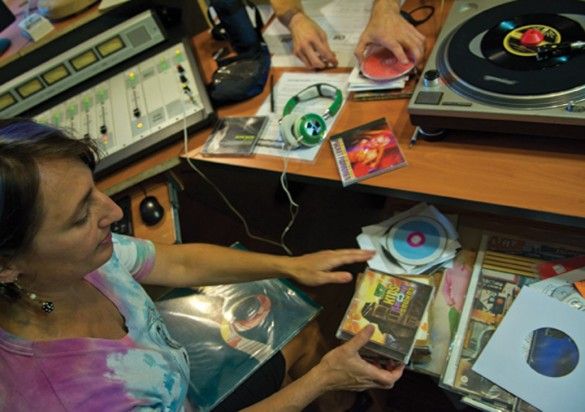 Genie Schropp, also known as Vinyl Vixen, of Makanda, runs the afternoon show 'Independent Worm Hole' Tuesday on WDBX-FM 91.1. Schropp has been with the station for nine years after a hiatus from her college broadcasting career. "It's kind of like I'm reliving my dream," Schropp said. WDBX has been in operation since 1996 and relies on community support to stay on the air. WDBX is trying to fundraise $20,000 through a Kickstarter campaign and listener donations to keep the station running. (Daily Egyptian File Photo)

A dispute over how to organize its board of directors has left community radio station, WDBX-FM with a new station manager and has led some volunteers to leave the station and ask donors not to support the station unless the make-up of the board changes.

Volunteers and former station manager, Dave Armstrong have been pushing for a community-elected board to run the nonprofit station, which was founded in 1996 by Tom Egert and Gene Turk of Heterodyne Broadcasting Co.

Currently, the Heterodyne Board of Directors is the only formal governing body for the station. Turk and Egert fill two out of three permanent positions on the board and have the power to veto any decisions volunteers and staff make, Armstrong said.

Board positions are not paid.

“Permanent seats on the board allows the members to see long-term what is best for the station,” Turk said. “The board of directors are committed to the station.”

The push for a fully elected board began at the station when Navreet Kang, resigned from the board in December.

“That I thought was a crisis,” said Armstrong, who resigned as station manager in early March.

After Kang’s resignation, staff and volunteers decided they wanted elections for all board positions.

Station volunteers and staff asked the board of directors to discuss and move forward with the full elections. Their request was denied and led to an open letter that was sent to the Daily Egyptian, asking Turk and Egert to resign.

Matthew Decker, a former DJ and volunteer since 2011 characterized the board as absentee managers.

But Egert disputed that.

When problems arise at the station that requires the board of directors’ attention, Egert said the board addresses them.

“The board [of directors] does not micromanage the station,” Egert said. “It’s not our duty to do that.”

Genie Schropp, a volunteer for 12 years said the station is governed by a three-tiered system, with the board of directors having top vote above the advisory board and the DJ volunteers.

Schropp, Armstrong, Decker and other volunteers said they think reinstating full elections for the Board of Directors will return community accountability to the station.

Armstrong said he and the station’s volunteers tried for three months to meet with Egert and Turk to discuss elections.

“We all walked away from that pretty disheartened,” Armstrong said describing the volunteer’s mood after the meeting. “This is an opportunity to give this awesome station back to the community.”

Egert said because the board of directors controls the station, the permanent seats on the board help maintain stability to address problems when they arise.

“If you are constantly changing your board of directors, then the station control will go from one group of people to the other group of people,” Egert said.

After Turk and Armstrong did not reach an agreement, Armstrong said he was removed from making any financial decisions as station manager.

“Which meant at that point of time, I really couldn’t effectively do a major portion of my job,” Armstrong said.

Armstrong said an emergency station meeting March 4, drew about 50 members of the staff, who voted to create a sub-board that would be formally recognized in running the station.

Schropp said she was told at the meeting that the volunteers could not vote against the board of directors.

“That’s not community radio. Where is the community in that?” Schropp said.

Schropp said community radio differs from commercial radio because the station is run on donations, has few advertisers, and has the autonomy of the community.

“You’re not being told what to do and what to say,” Schropp said. “Our mission statement is to have an open forum for communication, the arts, whichever the case.”

As of April 3, Marshall Anderson will replace Armstrong as station manager Turk said.

Schropp said she will continue at the station and keep pushing for a full board election.

“I feel loyal to the issue and to the station,” Schropp said. “I have a little glimpse of hope at the bottom of Pandora’s box that we’ll come to an agreement.”