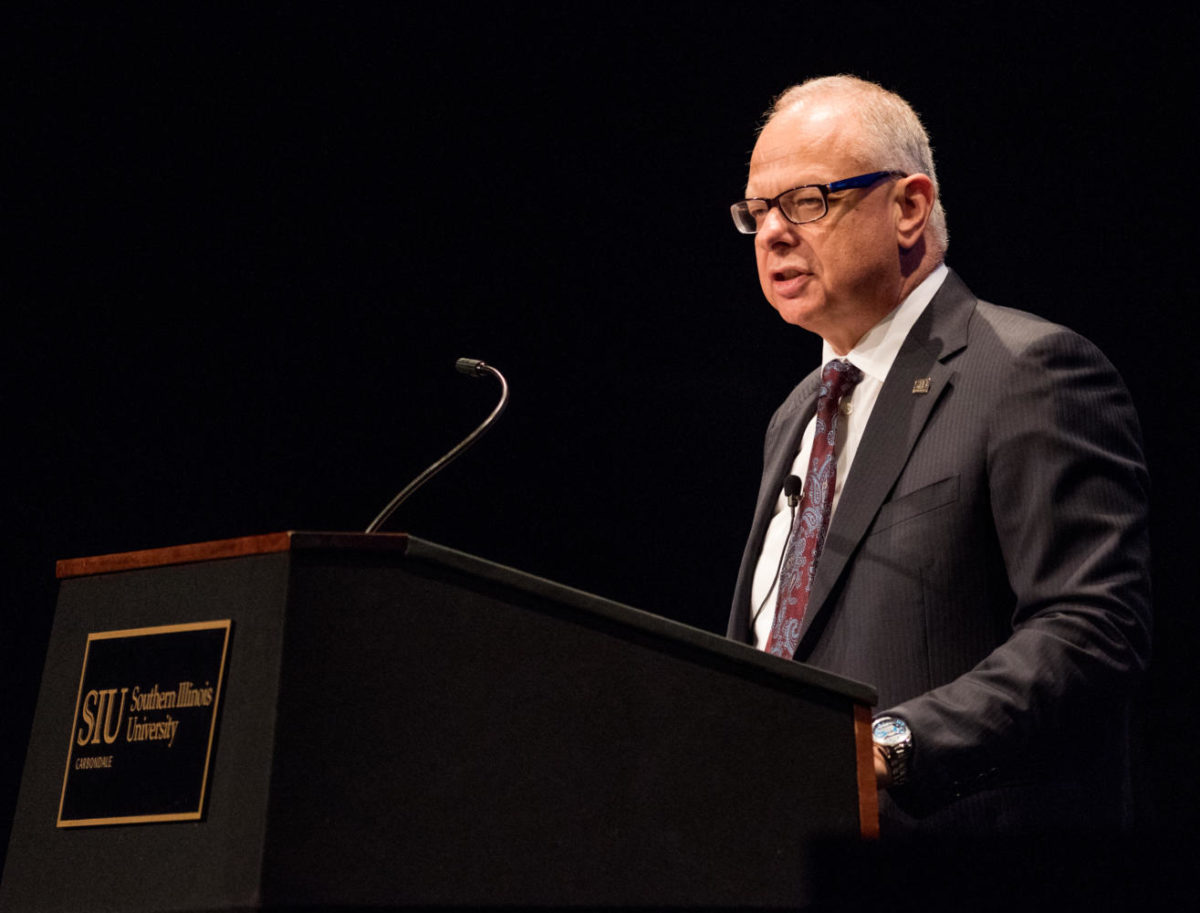 Southern Illinois University Chancellor Carlo Montemagno gives the "State of the University" speech Tuesday, Sept. 26, 2017, at Shryock Auditorium. Montemagno spoke on his vision for the university and the steps administration plans to take to increase enrollement numbers. (Brian Muñoz | @BrianMMunoz)

Chancellor Carlo Montemagno held a dinner for faculty members in support of his reorganization plan in late January, according to documents obtained by the Daily Egyptian.

The dinner was paid for using the chancellor’s discretionary account with the SIU Foundation.

Out of the 22 faculty invited, 15 were associated with science, technology, engineering and math programs. Montemagno is a member of the department of electrical and computer engineering.

HD Motyl, interim chair of cinema and photography and radio, television and digital media, said the chancellor told them they were invited because they seemed in favor of the reorganization.

“He said something like ‘If it’s going to work, we need people out there talking about it, talking it up,’” Motyl said.

The dinner was held Jan. 25 at the SIU Stadium Club and was catered by Mary’s Restaurant, based in Herrin.

Various campus leaders were also guests at the dinner, including the associate provosts, the chair of the Faculty Senate and the chair of the Graduate Council, university spokeswoman Rae Goldsmith said in an emailed statement.

“The chancellor was focused more on individuals than fields to be represented, although he also wanted a cross-section of faculty from various disciplines,” Goldsmith said.

Fifteen of the attendees are in administrative positions, such as directors/acting directors of programs, interim/associate deans and department chairs.

The emailed invite from the chancellor’s office said invited guests had been “identified as one of the leaders of the campus academic and research enterprise.”

“He knows there are many others he could have invited but wanted to keep the group of a manageable size for conversation,” Goldsmith said. “The chancellor encouraged attendees to… continue discussing ideas pertaining to proposed reorganization.”

The invitation said the dinner was a chance to “conversation with campus leadership regarding the reorganization and to share thoughts as to how we can more rapidly elevate the university.”

Goldsmith said the dinner was an engaged and positive meeting and some attendees asked if they could meet again.

“[Those attendees indicated] that the conversation should not end at the dinner,” Goldsmith said. “Some also asked about the possibility of expanding the group at a future meeting.”

This dinner was one of more than 70 meetings the chancellor has had with constituents, including numerous meetings with faculty groups, seeking their input, Goldsmith said.

Out of the 22 faculty members invited, 20 attended and two canceled: Jennifer Presar, assistant director of the School of Music and Craig Anz, associate professor of Architectural Studies.

Presar said she didn’t attend due to a prior engagement, but she was not surprised when she received the email from the Office of the Chancellor.

“I had talked with [David] DiLalla, Associate Provost for Academic Administration, during some of the open forums that the chancellor had,” Presar said. “I said I know I fit a lot of interesting checkboxes on representation throughout the campus.”

Presar said she thinks she was invited to make the meeting more representative of the faculty, as she is a female non-tenured track faculty member in an administrative appointment, an African American and someone who is optimistic about the reorganization.

“I did not know everyone that was on the list – guess would definitely be to try and get a cross-section of the entire university,” Presar said.

While Motyl favors the reorganization, he believes there are some issues with the details.

Specifically, Motyl said if each school will be in charge of its own recruitment, he wants to know where the funding will come from.

“If we were going into the School of Communications and Performing Arts, that school’s director would basically be in charge of getting the word out,” Motyl said. “I asked, ‘Is there money for this? Will there be resources for this?’ and there wasn’t really an answer.”

Alice Noble-Allgire, acting director of the School of Accountancy, was among the faculty that attended the dinner.

Montemagno said the state of the university is dire, Noble-Allgire said.

“The towers are going to be mothballs,” Noble-Allgire said. “He [gave] us a very vivid picture of what our current situation is.”

Noble-Allgire said there are positive things happening at the university because of the reorganization discussions.

“I’ve been on this campus for 23 years now,” Noble-Allgire said. “This is the first time I’ve seen this level of conversation in and among departments.”

The following is a list of faculty that attended Chancellor Carlo Montemagno’s reorganization dinner that was obtained by the Daily Egyptian through the Freedom of Information Act.

Staff writer Jeremy Brown can be reached at [email protected]
To stay up to date with all your southern Illinois news, follow the Daily Egyptian on Facebook and Twitter.