Golf chips in at second 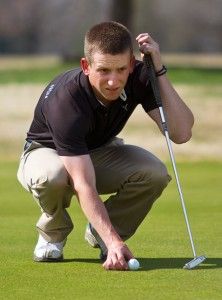 The SIU golf team almost had its first win of the spring, as the team came in second at the Tennessee State University Big Blue Intercollegiate.

The University of Tennessee-Martin won the tournament Tuesday. The Skyhawks finished with a score of 870 and the Salukis finished just five shots back, at 875. Belmont University rounded out the top three with an 884.

“It was a good tournament for us,” coach Leroy Newton said. “Our short game was a little bit better; we chipped and putted a lot better. We kept our composure.”

As a team, SIU had two players in the top 10 and four in the top 20. In the second round, all five Salukis shot under par—the best round of the tournament for any team, and the best round for the Salukis all season.

Harms led the Dawgs with a 1-under-par on the par-72 Hermitage Golf Club. He finished in second in the field of 83 golfers, five shots behind the winner, UT-Martin junior, Brendon Caballero.

Harms said familiarity with the golf course and a good practice round led to his impressive scores.

“Yesterday the weather was nice, and I played here last year and really liked the course and kind of knew everything about it,” Harms said. “After my practice round, I knew I was going to play well but I’m excited to put everything together for a change.”

Thompson came in eighth, shooting a 2-over-par, or a 218 for the tournament. Mitchell, who came in 92nd in his only other tournament of the spring, surprised the field, tying for 12th with a 220 in his three rounds.

Mitchell said his low scores came from practicing in nice weather, which has been rare for the team, and being on top of his game.

“It was a combination of everything,” Mitchell said. “I hit it really well yesterday, I made some good putts and didn’t make too many mistakes. I felt really good.”

After the first two rounds Monday, SIU was in second place. Newton attributed the team’s play to good weather and good preparation as the team practiced at one of the region’s toughest golf courses, Dalhousie Golf Club in Cape Girardeau, Mo.

“We played at Dalhousie the Saturday before we came down and it was 30 mph winds and the kids played pretty good there,” Newton said. “When they got down here, they thought, ‘oh, this is an easier golf course, not as bad with the wind conditions,’ and they played well.”

Tuesday brought rain and wind; conditions the Salukis have battled through all year. The bad weather caused scores to skyrocket as just one golfer in the field finished the third round below par. Newton said the team stumbled a bit because of changing weather conditions.

“We had winter (Tuesday) and summer (Monday),” Newton said. “We had sunshine (Monday) but (Tuesday) was, if you could put the word ‘crappy’ in there, that’s what we had.”

Even with the poor conditions, SIU managed to maintain its second place standing and fend off Belmont. The team will be off for two weeks before heading to Silvis for the Missouri Valley Conference Championship.

Newton said his confidence in the Salukis was not affected by the strong tournament because his team had great potential. The team came into the season with aspirations to tie or finish better than its third place standing in last year’s MVC tournament.

Novara said he is confident in the team heading into the season’s biggest tournament. He said if the team matches the focus and hard work they showed in its recent practices, the team could repeat its top-three finish.