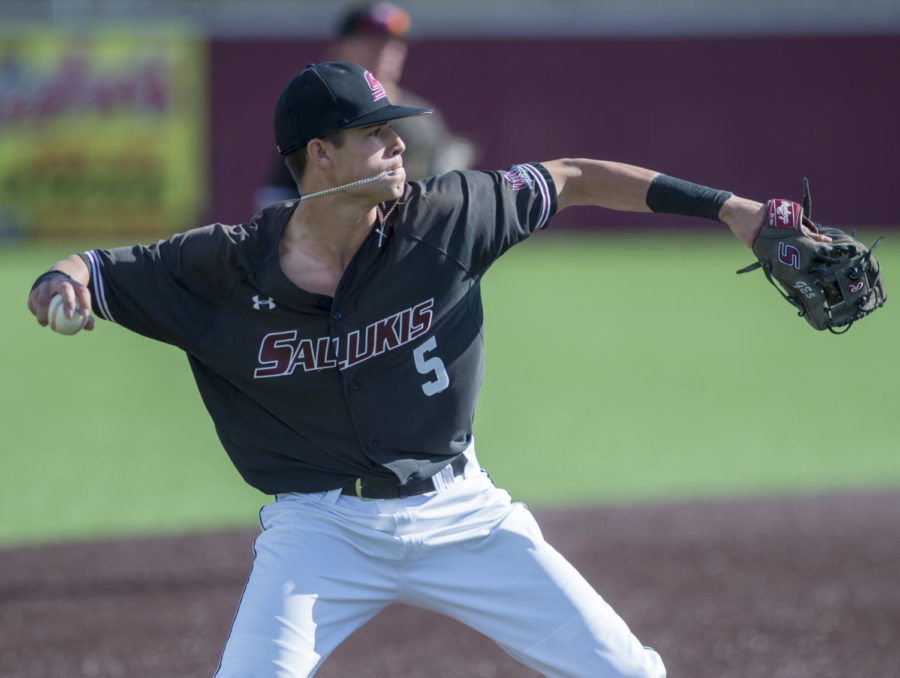 Freshman infielder Grey Epps holds his necklace in his mouth as he passes the ball infield Sunday, March 4, 2018, during the Warkhawks 13-7 win against the Salukis at Itchy Jones Stadium. (Dylan Nelson | @Dylan_Nelson99)

The SIU baseball team dropped the rubber game of a three-game series to No. 24 Illinois, 6-2.

After they split a doubleheader with Illinois (11-5) on Saturday, the Salukis came into the final game with a chance to win the series against the nationally-ranked Fighting Illini.

Sophomore starting pitcher Brad Harrison came in with a flawless record and 1.12 ERA for Southern. Prior to the contest, he pitched 20 straight innings without giving up an earned run. However, in his weekend debut, the sophomore faced the best offense he has seen this season.

“I have to treat every game the same,” Harrison said. “It’s hard when you’re facing a good team, but that makes it easier to get ready to go and get excited.”

Illinois struck first in the opening inning as junior center fielder Zac Taylor doubled down the left field line and proceeded home on two groundouts for an early 1-0 lead.

Southern had a response for the Fighting Illini in the bottom half of the inning, as junior second baseman Nikola Vasic walked and advanced to second on a groundout.

Senior shortstop Connor Kopach followed with a single and proceeded to steal second.

With one last single by junior left fielder Alex Lyon and a throwing error by Illinois, Vasic and Kopach scored and gave SIU the 2-1 lead after one inning.

After three scoreless innings, U of I took back the lead with a four-run inning that began with a single, followed by a walk and a steal that put men on first and third.

“We missed out on some opportunities to score and then turned around and gave up a four spot,” Henderson said. “That decided the ball game.”

With four straight singles, the Fighting Illini put up four consecutive runs for a 5-2 lead heading into the bottom of the fifth.

“From that moment on it completely changed the momentum,” head coach Ken Henderson said. “That was the game.”

In the bottom of the eight, with both teams struggling to put a run on the board, Kopach sent one to left that looked like it was going to clear the wall. However, junior left fielder Doran Turchin made a leaping catch that retired the Salukis and sent the game into the ninth with a 5-2 advantage.

Illinois added one more run in the ninth to secure the 6-2 win over SIU and complete the series victory.

Harrison (3-1) took his first loss of the season after he gave up five earned runs, seven hits and eight strikeouts in 7.2 innings of work.

“I thought he was outstanding outside of the one inning,” Henderson said. “He just stopped executing and left a lot of balls over the plate.”

The Salukis (9-11) will head to Edwardsville on Tuesday to take on the SIUE Cougars, First pitch is scheduled for 4 p.m. Junior pitcher Mason Hiser (1-2, 5.17 ERA) will make the start for the Salukis.