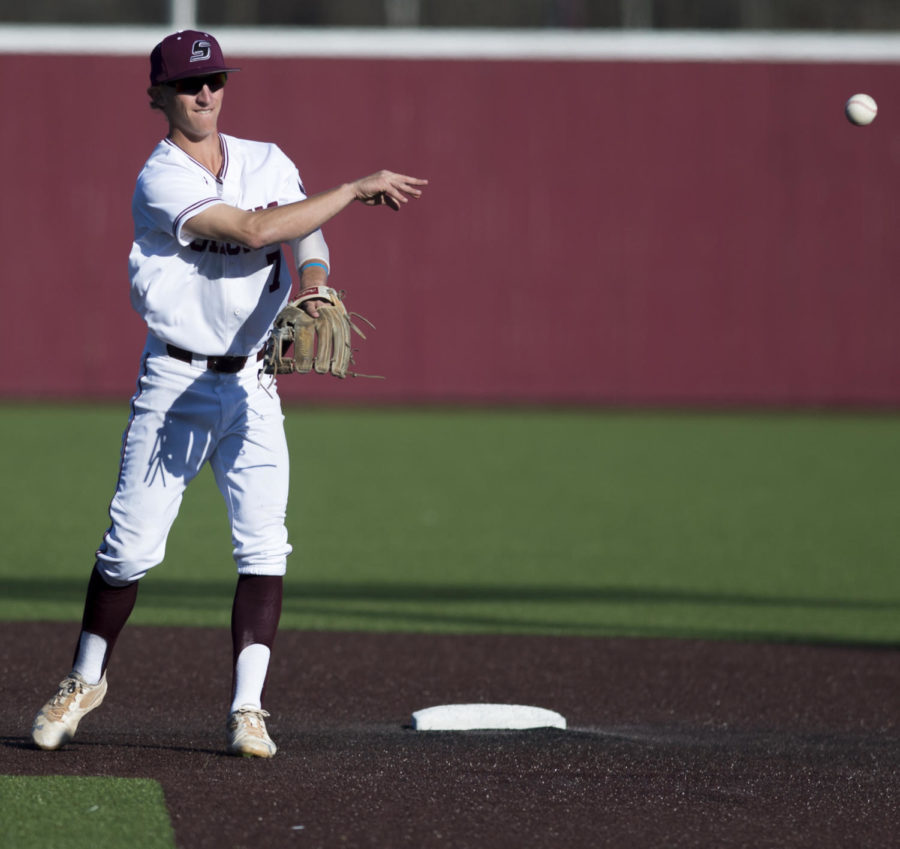 The SIU baseball team hosted nationally-ranked No. 24 Illinois (10-5) in a doubleheader on Saturday that opened up a three-game series.

The Salukis split the doubleheader against the Fighting Illini with a 16-6 loss and 5-4 victory, respectively.

The Fighting Illini struck first in the top of the third with a single by junior catcher Jeff Korte to right field. Korte advanced to third on a double and was driven in on a sacrifice fly for a 1-0 lead.

Illinois continued its charge in the fourth with a double followed up by a two-run home run by junior first baseman Bren Spillane that made it 3-0.

With a single, followed by a double and a sacrifice fly, U of I added one more run in the fourth for a 4-0 advantage.

The Salukis began to fight back in the bottom of the fourth as senior first baseman Logan Blackfan sent a double down the left-field line and was driven in by a single from junior left fielder Alex Lyon to make it 4-1.

SIU refused to slow down in the fifth as it found its first lead of the game beginning with back-to-back singles and an error that allowed a run to score.

Then, junior second baseman Nikola Vasic singled to right field and brought in another run. Vasic finished 3-4 with one run and one RBI.

After a walk loaded the bases, Southern scored two more off of two wild pitches and went up 5-4 after five innings.

The Fighting Illini responded back immediately as Spillane sent another one over the wall and evened the score at 5 runs each.

Illinois proceeded to load up the bases off of three straight singles followed by a batter being hit by a pitch to go back up 6-5.

With one last single in the inning, U of I added two more runs to stretch its lead to three runs after five and a half innings.

Illinois rallied for seven more runs in the seventh sparked by one last homer from Spillane that stretched the lead to 15-5.

The Salukis could not get anything going in the final two innings, as they went on to lose 16-6.

Illinois once again scored first as it opened with a double, followed by back-to-back groundouts for a 1-0 lead.

SIU struck back in the bottom half of the inning with a walk from sophomore center fielder Addison Fugitt followed by a double from senior shortstop Connor Kopach and a groundout by Blackfan that tied the game up at one run each.

The Fighting Illini took their lead back after three scoreless innings with a two-run homer from junior center fielder Zac Taylor to go back up 3-1.

Illinois stretched the lead to three runs in the sixth with a double followed by a single.

However, Southern refused to stay down, as the Salukis added two more runs in the sixth.

After a single by Blackfan, the first baseman reached home on three straight walks to make it 4-2.

Freshman third baseman Grey Epps added one more run by reaching on fielder’s choice and brought in a run and decreased the deficit to one.

SIU continued its charge in the seventh as Kopach sent a two-run shot over the center field wall for a 5-4 advantage.

The Salukis called on senior closer Ryan Netemeyer in the ninth. He struck out one and surrendered one hit on his way to the save.

Southern will close out the three-game series on Sunday. First pitch is scheduled for 1 p.m. Sophomore pitcher Brad Harrison (3-0, 1.12 ERA) will make the start for SIU.