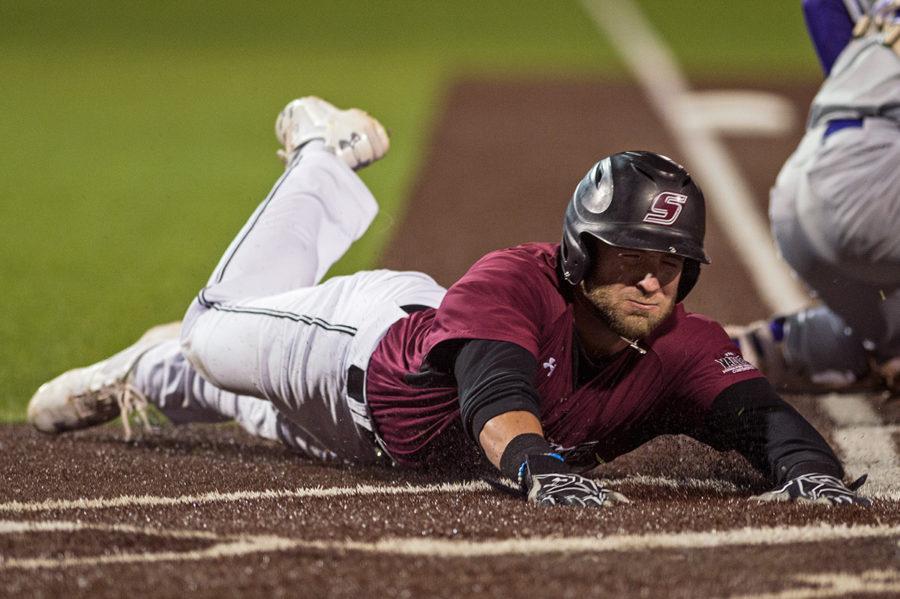 On Wednesday afternoon, SIU baseball took on the Murray State Racers for its second game in as many days.

Southern’s lineup was too much for the Racers (7-6) as the Salukis exploded for 23 runs and took home a 23-5 victory.

Since the Salukis shut out SEMO on Tuesday, today completed the first consecutive victories for Southern this season. SIU also improved its record to 3-0 this season in mid-week games.

The Salukis struck in the third when junior second baseman Nikola Vasic reached on a walk followed by a hit-by-pitch by sophomore outfielder Addison Fugitt.

Senior shortstop Connor Kopach followed and loaded the bases with a bunt single. Then, senior first baseman Logan Blackfan hit a single that drove in the first run of the game.

Southern brought in another run as junior right fielder Alex Lyon scored Fugitt on a sacrifice fly. Senior designated hitter Hunter Anderson then cleared the bases with a three-run home run that gave SIU a 5-0 lead.

After MSU responded with a run of its own, SIU came back in the fourth with a double and two walks that immediately loaded the bases.

Lyon then singled and brought two men across the plate. After a walk loaded the bases back up, sophomore center fielder Jared Kengott was hit by a pitch and scored another.

Then, sophomore catcher Austin Ulick smacked a bases-clearing triple that put Southern up 12-1.

Murray would not go down without a fight, however, as the Racers put up three more runs off of two hits, two walks, a hit-by-pitch and a wild pitch.

The Salukis proved to be relentless and responded with back-to-back walks that were immediately scored on a three-run home run by Anderson, his second long ball of the game. Anderson finished 2-4 with three runs scored and six RBI.

With a 15-4 lead, SIU added another run in the sixth with a single from Blackfan who was then driven in on an RBI triple from Lyon, who went 3-4 with five RBI.

In the seventh, Southern added two more runs as two men reached via a walk and an error and were driven in by a double from Fugitt. He finished 2-4 with three runs scored and four RBI.

Over the next two innings, the Salukis added eight more runs, including a two-run homer from Ulick that stretched the lead to 23-4.

The Racers could only muster one run in the final inning and gave Southern the 23-5 win.

In a relief role, senior pitcher Allen Montgomery (1-0) picked up his first win of the season. He pitched a scoreless 2.1 innings and struck out two Racers.

SIU (5-8) will return home on Friday to take on Northern Illinois in a three-game series. First pitch is scheduled for 3 p.m.