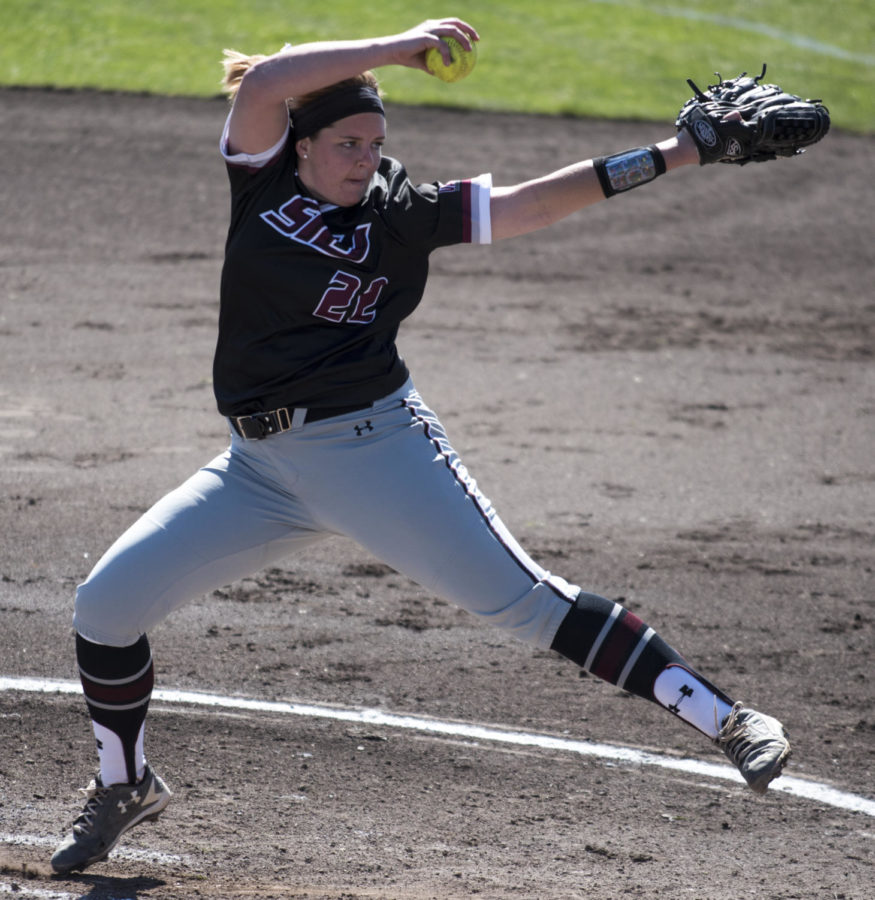 Junior Briana Jones took the mound for Southern in the first matchup against NIU. She pitched all seven innings and struck out five on only one run and five hits.

The Salukis attacked first when freshman center fielder Jenny Jansen cranked a two-run home run in the third inning for a 2-0 lead. It was the third home run of the season for Jansen.

NIU walked the next two batters which prompted an early pitching change.

After a sacrifice fly, Southern properly executed a double steal with runners on the corners. Junior first baseman Kyleigh Decker came across to score just before senior third baseman Sydney Jones got caught in the rundown and SIU increased the lead to 3-0.

Southern continued to add to its lead in the fourth after an RBI single by sophomore right fielder Susie Baranski scored one. Then, an error on a pop up brought another Saluki across.

Northern finally got on the scoreboard in the fifth inning after an RBI single.

However, Southern came back in the sixth inning with two runs off a double by senior designated hitter Haley Andrus. The double was followed by a sacrifice fly by freshman left fielder Maris Boelens that brought the score to 8-1.

In the top of the seventh, senior shortstop Savannah Fisher made a highlight-reel play when she snagged a foul ball cleanly while crashing into the fence. The catch helped Jones record the one-two-three inning for the win.

“The Northern Illinois game was a good game for us, we played well in all facets of the game,” head coach Kerri Blaylock said. “We know we’re young, but it’s time to quit using that as an excuse.”

The second matchup saw the Salukis face the Fighting Illini for the second consecutive day in the semifinal of the Coach B Classic.

Dover’s record sits at 1-6, but head coach Kerri Blaylock does not believe that’s reflective of her play this season.

“Savanna Dover pitched extremely well,” Blaylock said. “She’s thrown against some very tough teams, but she’s handled it as a senior and a captain.”

Neither team was able to generate much offense during the game, as a first-inning hit by U of I served as the only hit in the first five innings of the game.

The sixth inning saw U of I hit two singles to lead off the inning and then draw a walk, which put Dover in her first jam of the day with no outs.

The Fighting Illini capitalized tremendously with a two-RBI double followed by a bases-clearing triple to take a 4-0 lead and prompted coach Blaylock to pull Dover from the game.

On freshman Megan Brown’s first pitch, U of I scored another run off a steal of home.

Brown shook it off and kept the Illini from adding to their lead.

The Salukis were unable to come back in the seventh, even after Decker recorded their first hit of the game.

Junior Emily Oestreich had another tremendous outing against the Salukis, as she allowed only one hit while with five strikeouts in her complete-game shutout.

The Salukis close out the Coach B Classic on Sunday afternoon against the loser of the matchup between Murray State and NIU.