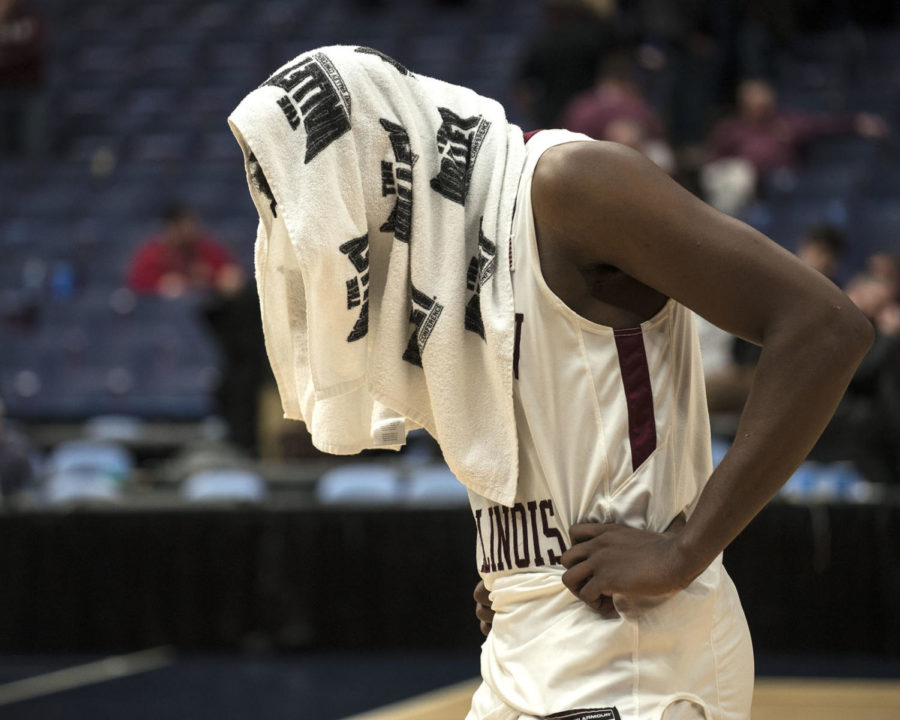 The victor of Saturday’s matchup between SIU and Illinois State earned a spot in the Missouri Valley Conference Tournament’s championship game against Loyola on Sunday.

Familiar foes in tight games, the Salukis and Redbirds split the season series as both teams claimed wins on their home courts. In the last matchup between the schools, the Redbirds walked away with the win in overtime.

On the neutral floor of the Scottrade Center in St. Louis, history repeated itself as Illinois State defeated SIU 76-68 — the same score as the overtime matchup between the squads on Feb. 8.

“I think there’s a difference between losing and getting beat,” SIU coach Barry Hinson said. “We got beat today. We played great and we gave everything we had. I’m proud of them, that was a hell of a ball game.”

Although the squads traded baskets for most of the first half, Illinois State held the lead until the 9:29 mark. At that moment, SIU senior Tyler Smithpeters hit a contested 3-pointer that tied the game at 15.

SIU chipped away and took a 24-23 lead late in the half off a 3-pointer by junior guard Sean Lloyd, who posted 15 points, three steals and four rebounds in the contest.

From there, the Redbirds outscored the Salukis 13-5 for the remainder of the half and carried a 36-29 lead into halftime.

In the second half, the Salukis started with the hot hand and went on a quick 8-2 run. Scores by Lloyd and junior guards Armon Fletcher and Marcus Bartley cut the deficit to 38-37.

At the 11:59 mark of the second half, Bartley nailed a 3-pointer and jolted the Salukis in front 45-44, Southern’s first lead of the game.

When SIU reached the 49-point mark, the Illinois State defense locked down on the Salukis and did not allow a score until the 3:40 mark, nearly a six-minute stretch.

In that time, ISU reclaimed the lead and did not surrender it until sophomore guard Aaron Cook scored on a layup that gave SIU a 56-55 advantage with under two minutes remaining.

In the final 75 seconds, SIU junior center Kavion Pippen fouled out of the game and took a major part Southern’s defense to the bench. Pippen finished the game with seven points, 10 rebounds and three blocks.

“That’s the best defense we played all year long,” Hinson said. “The game was over when K.P. went out.”

With nine seconds left in regulation, Illinois State inbounded the ball with a chance to win the game. As junior forward Milik Yarbrough drove to the basket, Fletcher rose up and blocked the shot at the rim, sending the game into overtime tied at 56.

“I knew he wasn’t going to pass the ball at the end of the game,” Fletcher said. “I didn’t want the ball to have a chance to even get on the rim. So, I just went over help side and blocked it.”

In the overtime period, junior forward Phil Fayne went to work for the Redbirds with 11 points in the first four minutes. He finished the game with nine rebounds, three block and 26 points, a game-high.

Fayne’s effort propelled the Redbirds to a 76-68 victory and a chance for an automatic bid in the NCAA Tournament.

With the exception of a possible selection to a postseason tournament, Saturday’s game marked the end of a career for SIU senior forward Jonathan Wiley and guard Tyler Smithpeters, who posted a double-double with 10 points and 11 rebounds in his final game.

“For all the adversity we went through, we’re still a 20-win team which is very rare,” Wiley said. “With all the injuries and sickness, for us to still be able to win 20 games, that’s something to look back at.”

The championship game of Arch Madness between Loyola and ISU will tip-off tomorrow at 1 p.m.

Southern will now await to hear its name announced for a postseason tournament before it puts a nail in the 2017-18 season.

“If those two teams [Loyola and ISU] go to the NCAA Tournament and you finish second in the eight-best conference in the country, surely you can get in the NIT,” Hinson said. “So that’s what we’re waiting on.”