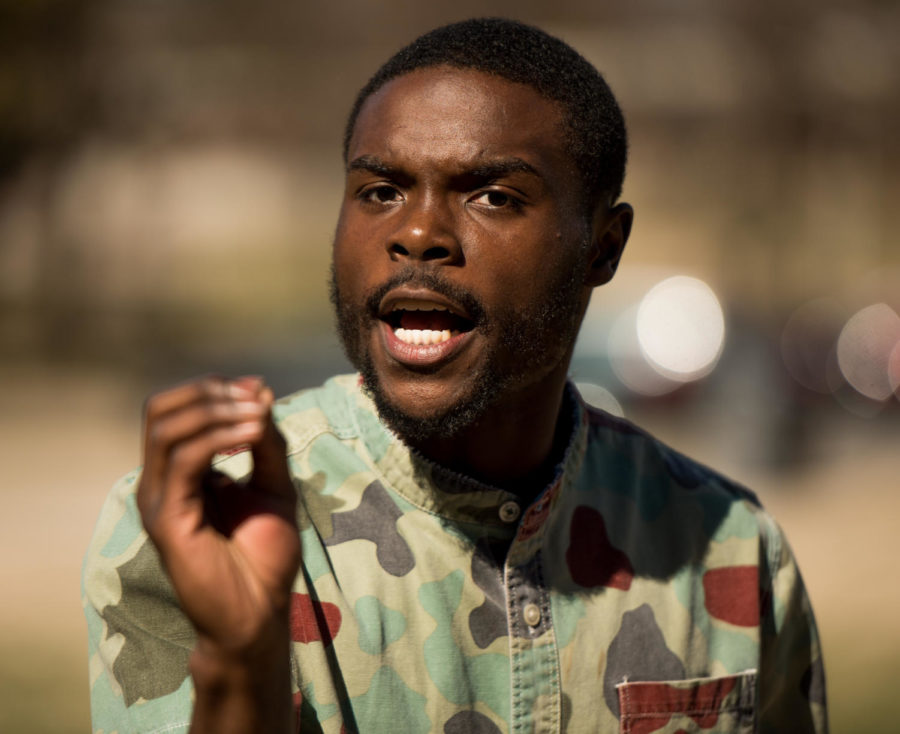 Joshua Bowens, former SIU Undergraduate Student Government president, protests Tuesday, Feb. 27, 2018, outside of Morris Library. Bowens spoke on racial and social issues on the SIUC campus and said he there will be continued demonstrations for 12 days at 12:12 p.m. (Brian Munoz | @BrianMMunoz)

Former Undergraduate Student Government President Joshua Bowens held a rally in front of Morris Library Tuesday, speaking about social and racial injustices on campus and said he will continue to do so until Spring Break.

At the rally, Bowens directed people in attendance to write down ways they had experienced injustices on pieces of duct tape.

“Put it down take it to the building or the teacher or the facility, where you had that problem at,” Bowens said. “Leave it there, let’s see if it’s there tomorrow.”

Bowens said he will continue rallying every day at 12:12 p.m. in front of Morris Library for the next 11 days.

“We are going to be right here every day until this university understands that without us [students] it doesn’t work,” Bowens said.

On Bowens’ piece of tape, he wrote down “My impeachment in USG was unconstitutional.”

Bowens was impeached from his position as USG president during a USG Senate meeting on Feb. 13.

“All of the allegations of why I got impeached, had to do with One Race,” Bowens said. “Isn’t that something? The company that I created for equality.”

Mary Jhay, a speaker at the rally, said that the event itself is unrelated to Bowen’s company.

“This is strictly for the student body, for students for campus,” Jhay said. “So it’s for everybody. It’s not just about his company.”

Bowens said while USG is a system meant to protect the students, it was the administration that chose to replace him.

“The administration has decided they were going to come in and cut my head off,” Bowens said. “[Then] put someone they wanted in control. That’s a problem because 1200 students put me in a position to protect them.”

“This was not the administration’s decision,” Buice said. “It was a decision made by the senate through an investigation conducted by our process outlined in our senate constitution.”

Buice said the bill of impeachment included more reasons for impeachment apart from those involving Bowens company One Race.

“[The bill of impeachment] states that submitting bills late or in a delayed manner caused issues for different RSOs,” Buice said. “There were issues brought up about office hours and non-attendance at those, and not attending meetings as well.”

During the rally, Bowens said he declined to comment to the media.

Staff writer Jeremy Brown can be reached at [email protected] or on Twitter @JeremyBrown_DE.