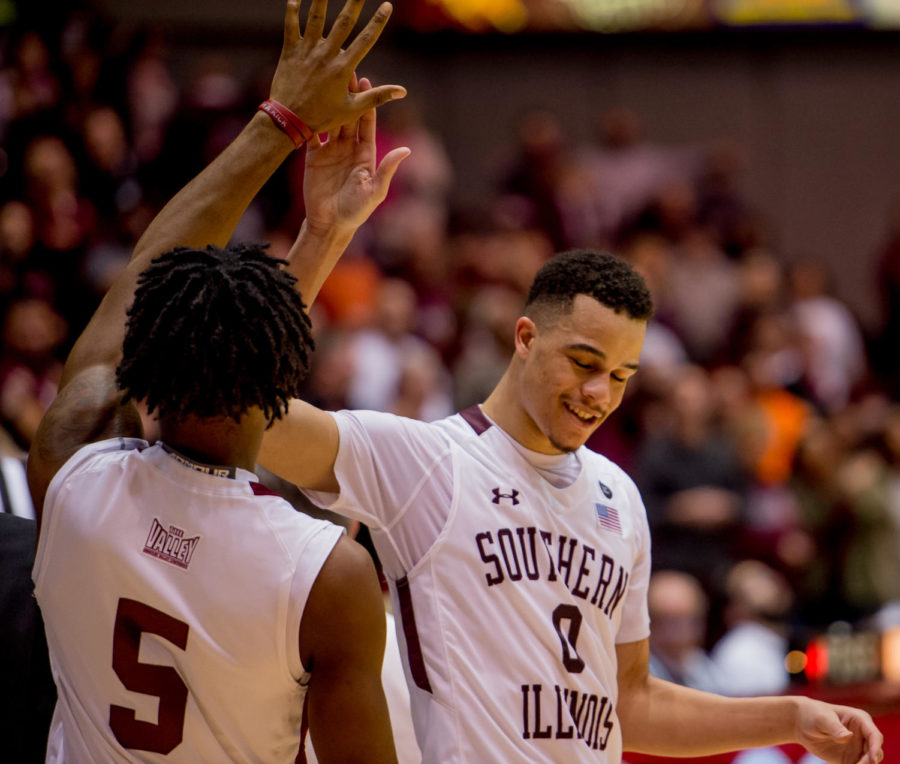 In college basketball, analytics often weigh heavily on how many seniors are on the team when rankings are composed. It is generally accepted that teams with multiple veterans will excel in postseason play due to sheer experience.

SIU’s seniors this season are guard Tyler Smithpeters and forward Jonathan Wiley. Each player has provided a different, but equally important role for the team this season.

Wiley initially began his career at Panola College in Carthage, Texas but transferred to SIU after his sophomore season.

“Growing up, I always played guard,” Wiley said. “When I got to college I grew a couple inches, so my position changed and I became more versatile playing multiple positions.”

One big driving factor in the recruitment of Wiley was the tradition of winning held in SIU basketball.

“Coming out of the tunnel before we start the game is my favorite part about SIU Arena,” Wiley said. “The adrenaline rush and being with my teammates in a good environment, I just love it.”

Minus the knee injury Wiley suffered that was initially thought to have ended his career, his senior season has been everything he hoped for.

“Any success that we have in the future will be a direct correlation to having Jonathan Wiley on the floor,” coach Barry Hinson said. “Very few teams have a spark they’re able to add at the end of the season, and we’ve been able to do that.”

Wiley recalled winning only 13 games as a freshman at Panola and being unsatisfied with that lack of success. This season, the Salukis ended the regular season with 19 wins and missed a chance at their 20th with losses to Loyola and Evansville.

“Not a lot of Division I teams can say they won 20 games in a season,” Wiley said. “I think we’re having a pretty successful season, but we still have some games to go.”

Wiley said that his fondest memory of his SIU career came at last year’s MVC Tournament. There, he experienced a large crowd of well-traveled Saluki fans that came to support the team.

With this season’s Salukis earning the second seed in the tournament, the highest finish in over 10 years, SIU looks to make a run and earn a bid to the NCAA Tournament.

“We have a bunch of guys who can do everything,” Wiley said. “We might not be the best shooters, but we love to fight and compete.”

Wiley said whether it be stepping up in big moments or leading by example, everyone on the SIU basketball roster has a leadership mentality.

Wiley said after he graduates in May, he wants to try to coach or get his Master’s Degree in management.

Smithpeters, on the other hand, is now in his fifth season at SIU.

Growing up down the road in Harrisburg, Illinois, Smithpeters never had a doubt about being a Saluki.

“Tyler Smithpeters has meant so much to this university, our athletic program and our region,” Hinson said. “He comes from a basketball tradition-rich family.”

Smithpeters’ older brother Kyle was previously a Saluki walk-on guard for the 2005 and 2006 NCAA Tournament teams.

The fifth-year senior recalls watching each home game with his father while growing up during those seasons.

“The tradition and fan support really just clicked here,” Smithpeters said. “The college basketball atmosphere at a sold-out SIU Arena game is a big pull for the team at home.”

Smithpeters often brings the ball down the court with a smile on his face, especially at SIU Arena. He noted that he is having fun this season and just soaking in every moment.

Similar to how Wiley described this year’s team, Smithpeters noted the close bond between teammates. Everyone respects each other and treats each other like a family, he said.

“Everybody is a different personality, but this group is different than any other season,” Smithpeters said. “With all the adversity that we’ve been through, we’ve taken the mentality of next man up and it’s worked out for us.”

Both Wiley and Smithpeters are no strangers to adversity, as both suffered career-threatening injuries within seasons of each other.

However, both players persevered and have been instrumental in putting SIU basketball in the strong position it is at tournament time.