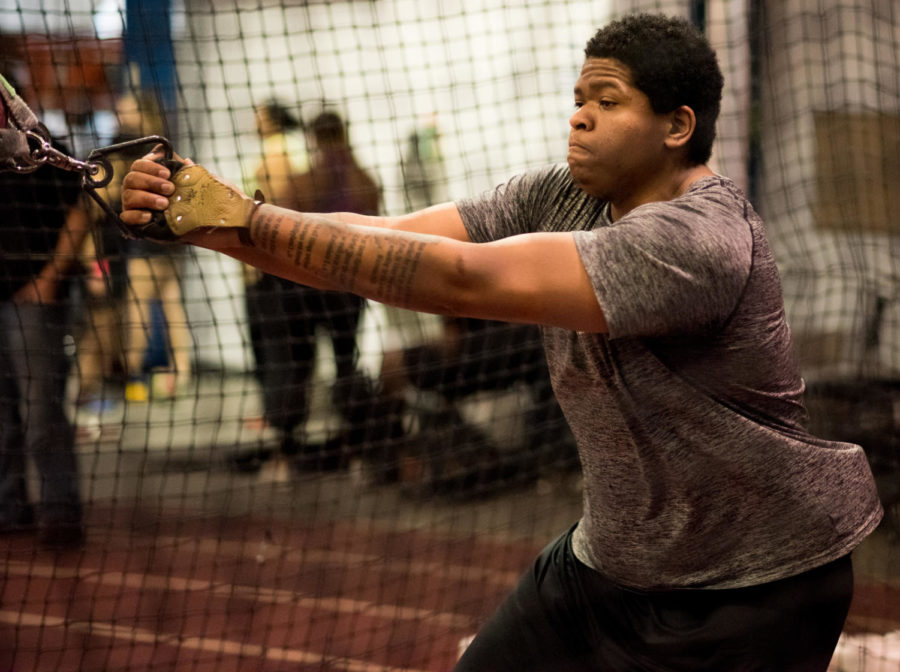 Isaac Ingram, a senior studying criminology from Harrisburg, practices weight throw Monday, Jan. 29, 2018, at the student recreation center. Ingram had the seventh-best throw in the nation at the 2018 Indiana Relay with a throw at 71'-7.5" (21.83m).

Senior thrower Isaac Ingram kicked things off for SIU on day one with a win in his signature event, the weight throw, with a toss of 70′-9.25″.

Junior teammate Rickey Hurley finished behind Ingram in the weight throw with a mark of 66-11.50″ and earned All-MVC honors in the event.

Junior runner Tyjuana Eason finished second in the 2oo-meter with a time of 24.24 and earned All-MVC honors.

In the jumps, sophomore Marcellus Fletcher took first in the triple jump with a mark of 50′-2.75″, a new personal best.

Junior thrower Adam Kessler won his first MVC title in the shot put with a career-best toss of 62′-9.5″, the fourth longest throw in program history. Senior teammate Jared Kern finished second with a toss of 62′-1″.

The women’s 4 x 400 relay team took home the title with a time of 3:43.35. The team consisted of Maloney, Eason, senior Mystique Thompson and senior Alicia Reed.

Ingram and Kern will head to the 2018 NCAA Indoor Track and Field Championships in College Station, Texas on March 9 to compete in their respective events.

As far as the rest of the team goes, the members will get three weeks off before returning home to begin the outdoor season in the Bill Cornell Spring Classic on March 23.