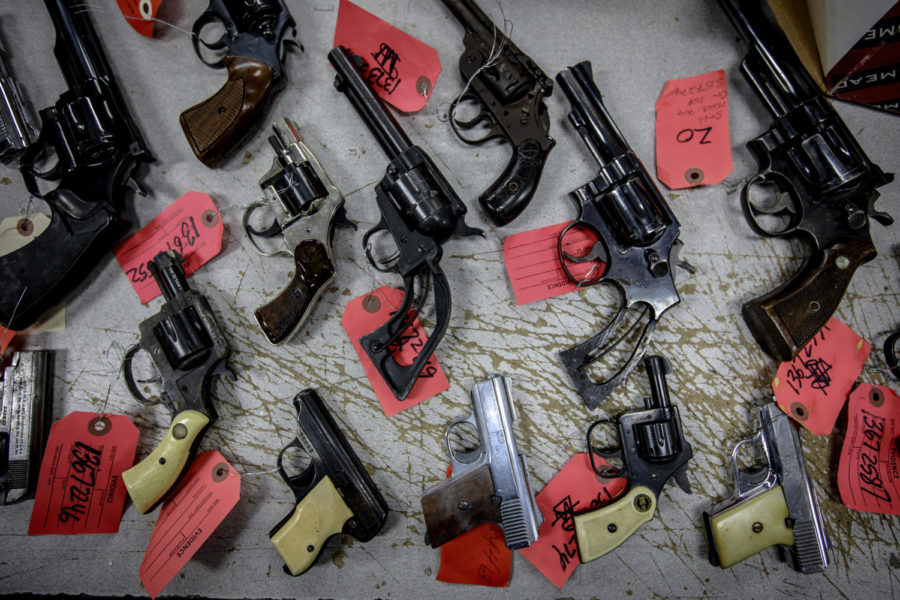 A new study finds that when domestic violence offenders must relinquish their guns instead of being barred from owning firearms, the risk that they will kill their partners goes down. (Brian Cassella/Chicago Tribune/TNS)

Joy met with students, a group of local social democrats and members of the Black Affairs Council and said their campaign recognizes the state of Illinois must change the status quo that has failed the state.

Instead of a government that serves all people, Joy said, we have a system with a tiny hand of political insiders having disproportionate power.

Travis Washington, who identifies as a social democrat said, “Right now the best thing we can do is make sure guns don’t get in the community because there’s no gun manufacturer in Chicago. They’re coming from many different places.”

Washington said any type of gun violence is a problem, because that’s someone’s son, daughter, sister or brother not coming home.

Daryl Hill, who identifies as a social democrat said Joy will target grassroots programs within black communities and educate young kids about causes of gun violence. He said Kennedy and Joy will change the way government policies are made

“It’s a issue that is personal to me and my family,” Joy said, who lost his son in Chicago in this past summer from a gun shot.

“I tell people that June 8, 2017, was the worst day of my life, as I endured every parent’s worst nightmare,” Joy said. “And the pain that comes with losing a loved one, especially a child is unbearable and a searing pain and ever since that horrific day our goal has been on how to prevent our parents from experiencing that pain.”

On Feb. 21, 2017, President Trump signed a bill into law rolling back an Obama-era regulation making it harder for people with mental illness to purchase a gun.

“I think that’s ridiculous. I think that’s one of the first actions that Trump took after being sworn in,” Joy said. He made it easier for people with mental illness to have access to these weapons of mass destruction. That was a foolish move.”

President Trump is currently doubling down on his support for arming teachers in the classroom, according to CNN.

“I think we need less guns, not more guns. I think we need to ensure that all candidates, elected officials and public pension funds are not profiting from gun manufacturers and ammunition companies,” Joy said.

“We need to ban these assault rifles like the AR-15 that was used in Florida, we need to ban these high capacity magazines, we need a bump stop ban in Illinois, quite frankly that should’ve happened last year. We urgently need to pass a gun dealer licensing act today,” he said.

Joy said the root causes of violence are complex, but a solvable problem.

“In order for our democracy to thrive, more young people should get into civic engagement,” Joy said.

Joy referred to a recipe for change, including change of the rules that govern political involvement, organization of a strong coalition that involves more into social life and electing brave, courageous leaders.

“It begins with jobs and opportunity and Chris often says that opportunity is an enemy of violence and the best way to stop a bullet is a job,” Joy said. “We need a all in approach to reduce the violence and common sense gun safety measures across the country and here in the state of Illinois.”