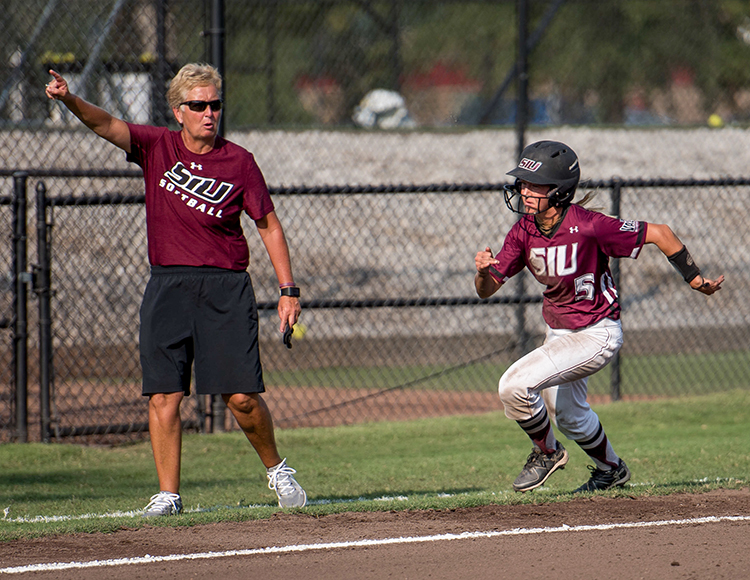 The Saluki softball team closed out play Saturday afternoon in the FGCU/Four Points with a split in its double header.

In the first game of the afternoon against the Stony Brook Seawolves, SIU claimed the 6-2 victory.

Junior Brianna Jones toed the rubbed for Southern and allowed only five hits while striking out four batters in the complete-game victory. Jones’ record now sits at 6-0 this season.

The Salukis got on the board early when sophomore catcher Katelyn Massa knocked a double that scored sophomore right fielder Susie Baranski.

Baranski batted 4-5 in the game with three runs scored.

Senior third baseman Sydney Jones then scored Massa immediately after off a double.

Massa came back around to bat in the top of the second inning and corked a two-RBI double that scored Baranski and freshman center fielder Maris Boelens and gave SIU the 4-0 edge.

Stony Brook eventually got on the board after an RBI single in the third inning but were unable to consistently garner much offense to keep up with the Salukis.

Then, Massa doubled in the sixth inning and scored Baranski.

In the bottom of the seventh inning, the Seawolves got a run across after an RBI single, but it was too little and too late.

The second game against host Florida Gulf Coast saw a tight matchup where FGCU escaped with a 1-0 win.

Senior Savanna Dover pitched for Southern and allowed only four hits and walked only one batter in a complete game.

FGCU junior Riley Randolph pitched a gem against SIU, allowing only two hits while walking only one batter.

Both hits occurred in the first inning, where sophomore second baseman Maddy Vermejan hit a single followed by another single by Massa.

FGCU scored the first run of the game late in the sixth inning when they loaded the bases with no outs.

Eventually, FGCU scored on a fielder’s choice and took the 1-0 lead.

Randolph then followed with a one-two-three inning that gave FGCU the narrow victory.

The Salukis (7-5) will return to Carbondale to play in the Coach B Classic on Friday for a doubleheader.