Not just “pingpong” but table tennis 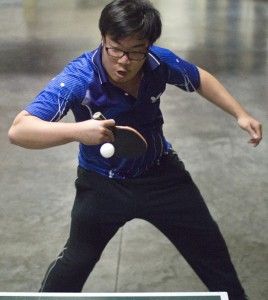 Some international students at SIU find a slice of home in Carbondale within the table tennis club.

Table tennis, more commonly known as pingpong in America, is a popular and competitive sport in Asia, and the table tennis club at SIU is comprised of players from all over the globe.

It is also one of few sport clubs to have an actual coach, longtime player Greg Dillard. Dillard is from Carrier Mills and has been coaching the team since 1986. He has led the team to numerous berths in national tournaments and appeared in multiple national tournaments during his playing career.

Dillard said he coaches because he loves the game but he also loves to see international students join in something that makes them more comfortable in the U.S.

“Table tennis to (foreign students) is like our basketball and baseball in America; it’s one of their number one sports,” Dillard said. “So when they play here, it gives them something to bond with.”

One of the older international students on the team is Chung-Ying Tsai. Tsai, known by his teammates and peers as “Kyle,” is a doctoral student from Taiwan studying mechanical engineering. He said he has felt more at home in Carbondale because of table tennis.

Tsai originally attended SIU but went to the University of California, Los Angeles in the fall of 2010. After a semester in Los Angeles, Tsai decided to come back to Carbondale.

“There were some other reasons, but one of the big reasons was that they didn’t have a good enough table tennis club there as they did here,” Tsai said. “I like the whole atmosphere here and I like having a really good coach.”

Shane Bennett, the assistant director of sport clubs and intramurals, said one of the club’s strengths is its global popularity. Bennett said the table tennis club also stands out because of its success in competition.

“It’s a sense of familiarity because it’s an international sport,” Bennett said. “All students are familiar with the sport whether they’re recreational or want to play competitive.”

One of the team’s biggest tournaments is the National Collegiate Table Tennis Association National Championship. To get to the national championship, players must first win two regionals in St. Louis and then one in Chicago. There were more than 300 students from across the country in this tournament, Dillard said.

The team usually sends at least one player for singles, but this year SIU sent three, the most in the club’s history, Dillard said.

Lei Zheng, a senior from China studying finance, won his round-robin group at nationals but lost in the knockout round. Tsai, the number No. 2 player on the team, qualified for the consolation tournament and went on to win three singles matches in the bracket.

Dillard said the team’s best finish came 15 years ago when Charnchai Tangpong made it to the final-eight of the 300-plus player tournament. Dillard and Ho said Tangpong was the best player the club has ever had.

Dillard and Ho also expect current players to make deep runs in their upcoming tournament, the St. Louis Open. The open, which is hosted by the United States Association of Table Tennis, runs May 3 and 4, and is the team’s final national tournament.

With a team composed of international students, the club members said they are welcoming to new players. Dillard said the seriousness of the team and the high level of play can “intimidate” some newcomers.

“We get new kids all the time and sometimes they get a little intimidated, watching our good players play,” Dillard said. “I always take them down to the other end and just practice with them. They’re amazed at how quickly they learn.”

The team practices from 6 to 10 p.m. every Friday and 2 to 6 p.m. every Saturday in the aerobics room of the Recreation Center. Ho said interested students can contact him by email, [email protected], or attend practice.