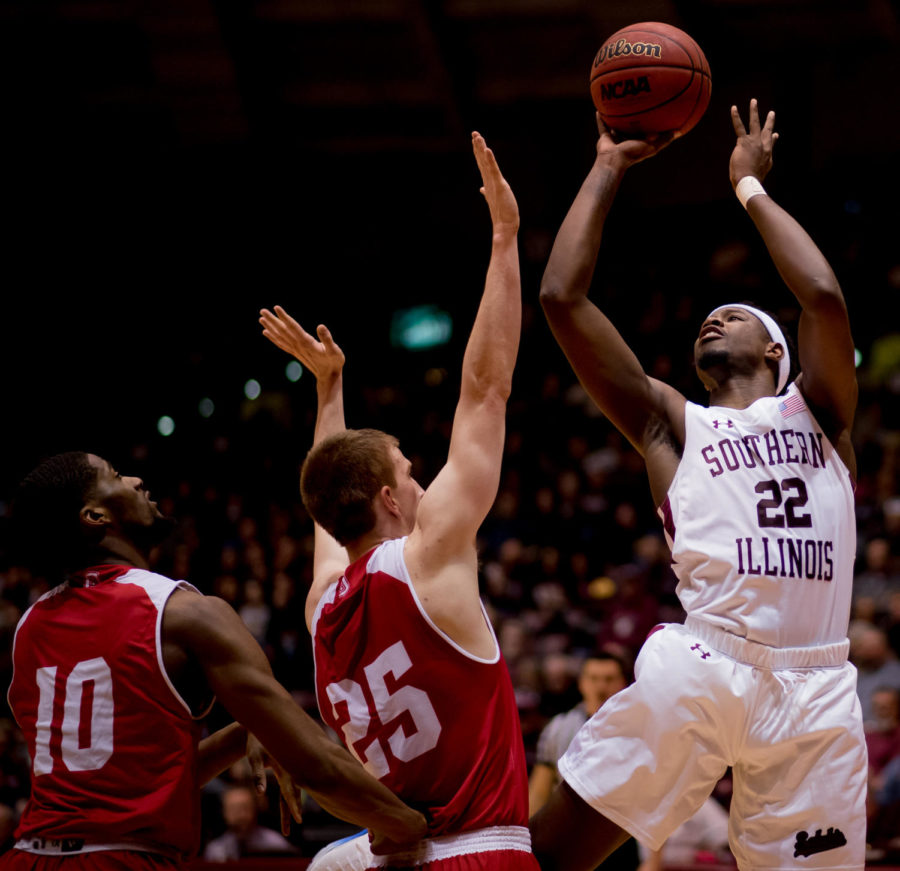 Junior guard Armon Fletcher goes for a basket Sunday, Feb. 11, 2018, during the Salukis' 74-57 win against the Bradley Braves at SIU Arena. The Salukis are now the lone second place team in the Missouri Valley Conference. (Brian Munoz | @BrianMMunoz)

Due to the significant amount of injuries the SIU basketball team faced this season, junior guard Armon Fletcher was forced to move into the power forward position, stretching the floor as the fourth guard on the court.

Fletcher has thrived in his new hybrid position, posting career-high numbers across the board with 14.4 points and 5.2 rebounds per game.

“It’s put me in a position to be around the basket more,” Fletcher said. “I wasn’t expecting this coming into college. I feel like my past experiences have molded me into a player that can play multiple positions.”

At Edwardsville High School, Fletcher noted that he played the five position. In his senior year, Fletcher averaged a double-double with 17.1 points and 13.4 rebounds per game.

However, the physicality between high school and Division I basketball is a steep difference.

“I’ve added more physicality to my game and I’m getting used to it,” Fletcher said. “In the game at Bradley, against [senior forward] Donte Thomas, he really woke me up and made me realize I needed to improve more.”

Fletcher did, in fact, improve his physicality as Thomas went from scoring 22 points in the first matchup against SIU to only nine points in the second meeting.

There are numerous instances of Fletcher making big stops defensively while guarding the bigger man.

As recently as the matchup against Missouri State game on Feb. 14, Bears senior forward and MVC Preseason Player of the Year Alize Johnson posted Fletcher up in an attempt to hit a shot to win the game in overtime. Fletcher knocked the ball out and set up an SIU possession in which he hit a layup.

Fletcher also provided a heads-up play that effectively ended the game in the matchup against Indiana State on Jan. 2.

When he saw the Sycamores rushing down the court to score, Fletcher stepped in front of the guard and drew a charge.

The Edwardsville native not only has made big stops defensively with tremendous amounts of hustle but has possessed the clutch gene on offense.

In the second game against Valparaiso, Fletcher broke a tie and won the game on a 3-pointer with 44 seconds left.

“It’s just the want to make that shot; it’s the confidence to be able to shoot it and live with if you miss it or make it,” Fletcher said. “My teammates know that and try to find me in those moments. Some have been good and some have been bad.”

Although Southern suffered a loss, Fletcher stepped up in the first game against Valpo this season. He scored a career-high 32 points and grabbed a career-high 14 rebounds against the Crusaders’ two seven-footer that guarded him.

Fletcher attributes his success as a converted post player to the coaching of assistant Brad Autry.

“He does the big workouts in practice, he has a lot of energy and wants to fight 24-7,” Fletcher said. “From being with the guards down to the bigs, I was kind of shell-shocked at first, but coach Autry has brought that dog out of me and helped me with the mentality to keep fighting.”

He said that Autry constantly points out the bad things, but what Fletcher likes about his coach is how quick he is to praise the good things he does.

“He’s a really talented kid and figured out how to go really hard,” Autry said. “I think he’s really improved his physicality and his activity level on both ends of the floor.”

Now, as senior forward Jonathan Wiley returns from injury when everyone thought his season was over, Fletcher will no longer be playing the four when he is on the court.

“I’m versatile now, I can play the four, three or two,” Fletcher said. “Whatever coach needs me to do, I’ll do it.”

Autry said that Fletcher has stepped into a different role each season for SIU and excelled each time. He noted that Fletcher is on a natural incline in all areas of the game like initiating and absorbing contact, attacking off the dribble and rebounding.

The 6-foot-5 junior has held a team-first mindset throughout the season, emerging as a leader on the floor.

“At Illinois State, we’re coming off a timeout and Armon yells at everyone and says, ‘act like you’ve been here before’,” head coach Barry Hinson said. “I didn’t even think to say that. That’s a veteran move and a guy that’s making strides.”

With career-highs across the board, there is one aspect to Fletcher’s game that he feels needs improvement: 3-point shooting.

“Mainly with me it’s just shot selections and repetition,” Fletcher said. “It’s just me getting back in the gym, getting a lot of reps and getting that muscle memory back.”

Although he made more shots from beyond the arc last season, Fletcher’s shooting percentages have seen a slight increase.

Fletcher continues to work on all facets of the game, determined to end the season on a high note.

“I feel like the amount of work I’ve put in the offseason has set me up for a big year,” Fletcher said. “It’s been that so far this season, I just want to keep it going and go to the NCAA Tournament.”