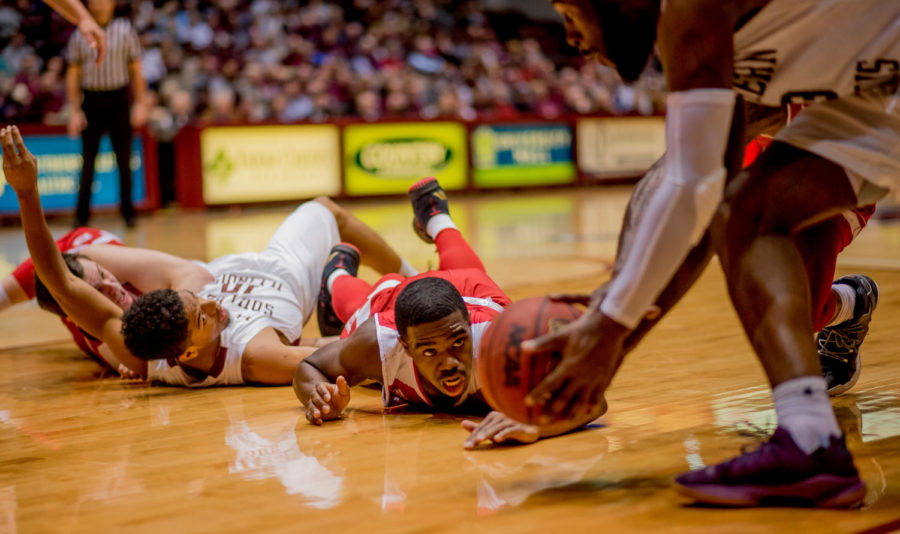 Bradley University forward Elijah Childs watches as Southern's Sean Lloyd Jr. picks up the ball after a scuffle with Southern's Aaron Cook on Sunday, Feb. 11, 2018, during the Salukis' 74-57 win against the Bradley Braves at SIU Arena. The Salukis are now the lone second place team in the Missouri Valley Conference.

“Our defense was horrendous in the second half,” Bradley head coach Brian Wardle said. “We have to give southern Illinois some credit, they hit some tough threes down the stretch.”

Wiley finished with 4 points and 4 rebounds in 13 minutes of play.

“Jon’s a warrior, I was happy for him,” senior guard Sean Lloyd said. “He brings back a lot of stuff we need, he can play the five and he can play small with other people.”

Lloyd scored 12 points and grabbed 4 rebounds in the game.

Bradley jumped to an early lead, but the Salukis continued to rally back. It wasn’t until the five-minute mark of the first half for SIU to tie the game at 21-21 after junior center Kavion Pippen put a Bradley defender on a poster with a ferocious dunk.

While battling sickness, Pippen dropped 21 points with 8 rebounds and 4 blocks in 27 minutes of action. Despite Southern’s efforts to build a lead, the game was tied at 29-29 heading into halftime.

After Bradley came out of the locker room ready to execute, SIU saw themselves with another deficit.

But the Salukis responded with two consecutive 3-pointers by sophomore guard Aaron Cook to take the 39-36 lead and forcing a Bradley timeout.

Southern turned Cook’s points into a 19-4 scoring run for nearly 5 minutes to build a double-digit lead.

“It was the kerosene,” Saluki head coach Barry Hinson said. “The shots were the igniting that we needed after they came out and hit a three right out the bat.”

“I came out in the second half ready to shoot,” Cook said. “My teammates swung me the ball, and whenever I got it I was ready to shoot.

The Braves continued to hang around after the run, however, as the score was only 62-55 in the Salukis favor after a 3-pointer with 6 minutes remaining in the game.

SIU rallied, going on a 12-2 scoring run to close out the game and seal the victory.

The Salukis continue action this Wednesday night at SIU Arena to face the Missouri State Bears. Tip-off is scheduled for 7 p.m.