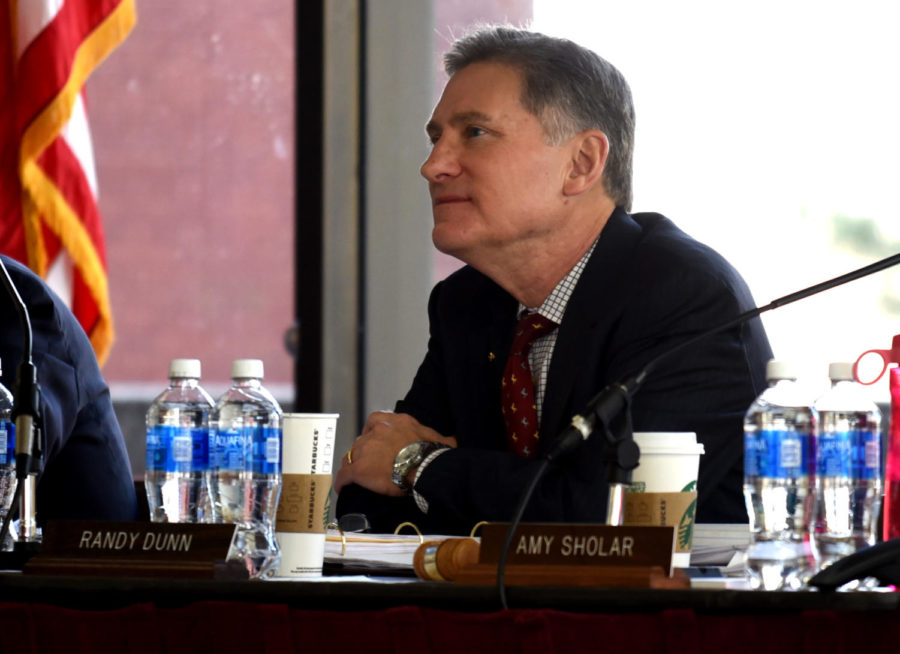 SIU President Randy Dunn listens to committee reports during the SIU Board of Trustees meeting Thursday, Feb. 8, 2018, in the conference center at SIUE. (Reagan Gavin | @RGavin_DE)

By Athena Chrysanthou and Reagan Gavin

Following a heated discussion in regards to concerns over the stability and future of SIU and its restructuring, the Board of Trustees approved a two percent tuition raise, Thursday.

The board also passed to have one general uncapped on-campus student fee of $117 per credit hour. Student trustee Sam Beard expressed concerns over uncapping student fees and increasing tuition.

“Year after year after year we raise the price of attendance to the university without actually increasing the quality of the education and student life,” Beard said. “By uncapping all of these fees, students who are taking 15 or 18 credit hours will now have to pay even more in fees to the university than if they were capped at 12.”

Due to a larger amount of attendees who wished to comment after the meetings, their time was limited to two minutes to speak to the board.

Faculty Senate President Kathleen Chwalisz commented on the reorganization process and her belief it will be better for programs.

“We simply have too many departments to support as independent academic units at this time. We don’t have the money, faculty lines and staff positions to support departments in the way they need to be supported to thrive,” Chwalisz said. “Schools save programs, schools have been designed in an elegant manner, right now there are several departments that are not able to cover their own costs in budget.”

Chwalisz said she believes the reorganization provides an unprecedented opportunity for shared governance as faculty have been given a basic framework and are in charge of envisioning what the school will look like, but noted some faculty have chosen not to participate.

Faculty Association President Dave Johnson said the debate of SIU boils down to trust and whether the chancellor can be trusted at this time.

“Universities however can not be run on trust alone,” Johnson said. “We now know that in the midst of our current crisis Montemagno insisted on SIUC providing jobs for his daughter and son-in-law who lacked any formal qualifications for these jobs.”

Johnson said students, faculty and staff have lost trust in Montemagno and ultimately, only they can rebuild this university.

“We have our work cut out for us, but let us do our work,” Johnson said.

Representative of the Graduate Assistants Union Lauran Schafer spoke of the chancellor creating a “culture of intimidation at SIUC.”

Shafer said she is concerned about the administration’s disregard for shared governance and advised the board to “keep an eye” on the constituency bodies who voted to oppose the universal elimination of departments.

“While I understand, you may all enjoy the cordial, comfortable and respectful demeanor from the chancellor, I think it’s important that you know that it is not the man we all experience when you are not present,” Shafer said.

Graduate and Professional Student Council President Jonathan Flowers spoke to the board in regards to GPSC’s 23-1 vote of no confidence in chancellor Montemagno, which passed Tuesday.

When asked his position on this, Montemagno responded, “I don’t have any real response. I’m disappointed that they would take that position, and I look forward to continuing to work with them.”

He said GPSC has attempted to make the board and the administration aware of the concerns leading to the vote through a letter of complaint and censure last semester.

The Daily Egyptian obtained the censure and letter of complaint, and can be found below:

“To be clear, the face of threats to our faculty, our department and our institution, the Graduate and Professional Student Council will not yield, not to this chancellor, not to this board, not now and not ever,” Flowers said.

Associate history professor Natasha Zaretsky spoke to the board and expressed her concerns.

“I am here today to ask for your stewardship,” Zaretsky told the board. “The chancellor’s restructuring plan for our campus is in deep crisis, and the community is looking to you for your leadership.”

Zaretsky told the board the faculty senate, the graduate council and USG passed resolutions by “considerable margins” opposing reorganization.

“These votes don’t lie,” Zaretsky said.“This crisis is happening because in this haste, the chancellor did not take the time to go trust in our campus and learn about our strengths as well as our challenges and now an ethics investigation has eroded trust further.”

Speaking after the meeting, Montemagno said comments made during the Q&A session about a culture of intimidation at SIU were inconsistent.

“I treat our faculty with respect; I treat everybody with respect,” Montemagno said. “I am not rude, I’m not abrasive, and those statements, I think, are not reflective of the actual truth of the matter.”

In regards to the progress of the reorganization, Montemagno said it’s “progressing very well.”

“The number of schools that are proceeding is large, the number of institutions that have voted to extend the consultative period to 30 days is only three out of the 20 schools,” Montemagno said. “People are engaged, people are working hard on it. This has been a very collaborative and deliberative process.”

The next Board of Trustees meeting is set for Thursday, April 12, at Southern Illinois University Carbondale.

Editor-in-chief Athena Chrysanthou can be reached at [email protected] or on Twitter @Chrysant1Athena.

Managing Editor Reagan Gavin can be reached at [email protected] or on Twitter @RGavin_DE.