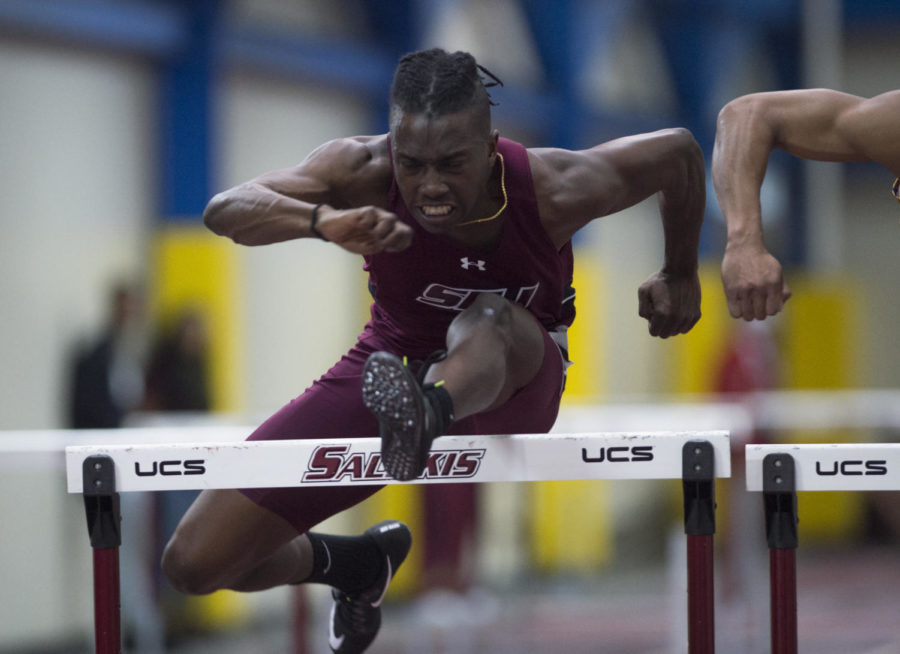 The Don DeNoon Invitational was the largest track event SIU has hosted in recent years as 570 athletes from 14 teams made an appearance.

On the first day of the event, senior thrower Isaac Ingram took first place in the weight throw for the fifth straight time with a throw of 70′-5″.

The Salukis had two other throwers finish in the top five of the weight throw as junior Ricky Hurley took fourth with a mark of 62′-0.50″. Junior Adam Kessler took fifth with a personal best toss of 60′-5″.

Sophomore jumper Marcellus Fletcher took first in the long jump for the first time in his collegiate career with a six-inch personal best of 22′-7.75″. Senior Louis Dotson backed up Fletcher with a fourth-place finish and a personal best mark of 22′-3.50″.

In the women’s weight throw, Southern had two athletes place in the top three, as sophomore Alexis Roberson finished second with a toss of 63′-7.75″. Sophomore Nikki Freeman finished third with a mark of 56′-4.50″.

Freshman vaulter Erin Diemer finished third in the women’s pole vault with a personal-best mark of 12′, becoming the eighth female in school history to clear 12′.

In the men’s pole vault, two Salukis placed in the top three as junior Jacob Wells finished second with a season-best mark of 15′-1″, while freshman Kyle Zeinemann finished behind his teammate with a vault of 14′-1.25″.

In the women’s pentathlon, senior Kilee Hagerstrand finished second with 3493 points and a win in the 60-meter hurdles.

On the second day of events, junior Justine Paton finished fourth in the women’s high jump with a mark of 5′-3″.

Fletcher put up another impressive performance in the triple jump as he finished third with a mark of 46′-4″.

The women had two athletes finish in the top five of the triple jump as senior Kezia Martin took second with a mark of 39′-2.75″ and senior Ashanna Hodge in fifth with a jump of 37′-6.75″.

In the women’s shot put, freshman Aveun Moore finished third with a throw of 46′-5″.

Ty’juana Eason took home another event win in the 60-meter as she put up a time of 7.51.

Senior Josh Maier took home the first-place finish in the one-mile run with a time of 4:13.92.

Up next, the team will head to Nashville, Tennessee to compete in the Music City Classic hosted by Vanderbilt on Feb. 9-10.