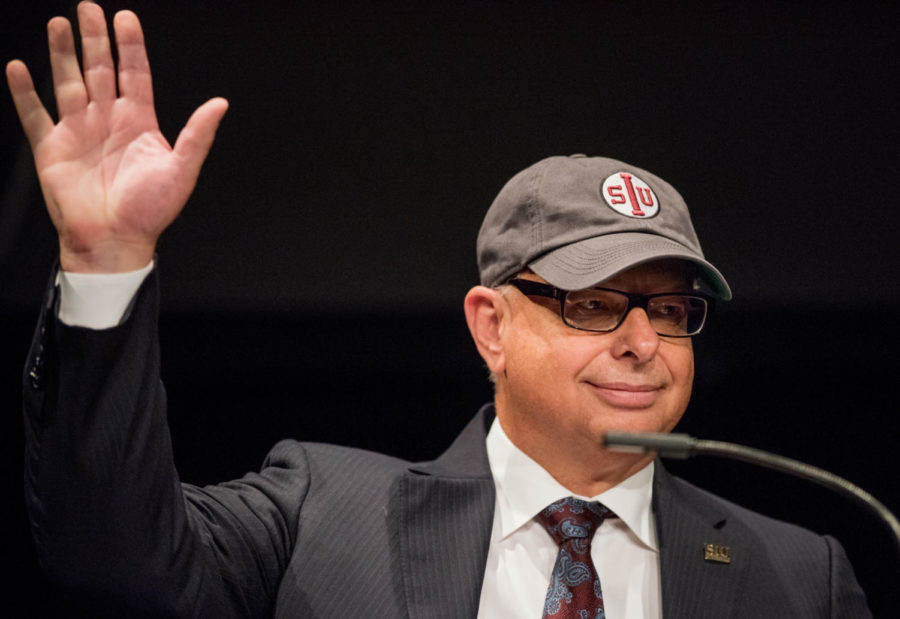 Southern Illinois University Chancellor Carlo Montemagno waves to the audience after his "State of the University" speech Tuesday, Sept. 26, 2017, at Shryock Auditorium. Montemagno spoke on his vision for the university and the steps administration plans to take to increase enrollment numbers. (Brian Munoz | @BrianMMunoz)

The decision by SIU President Randy Dunn comes after the Daily Egyptian on Tuesday reported the hiring of Melissa and Jeffrey Germain into university jobs created for them, that they never formally applied for, and that were never advertised, documents show.

“The information that’s been reported certainly presents a set of facts that is appropriate to examine,” said Dunn, who said he first learned many of the details of the hirings and searches from the Daily Egyptian article.

He said the inquiries will seek out how the hirings unfolded, and whether any legal, ethical or compliance issues arise. The timeline of the inquiry will be determined by the office.

If the office decides to continue with the investigation, the inquiries will be referred to the Illinois Office of Executive Inspector General, or the state ethics office, which has jurisdiction over public universities.

“I welcome a review of faculty hiring and system-approved employee hiring at SIU,” Montemagno said in a written statement Thursday evening. “I have not had nor will I have any role in hiring or supervising the employees and faculty members in question. It is my understanding that these hirings were done in compliance with SIU policies.”

Dunn said though it’s not unethical for a faculty member or administrator to suggest a candidate for a position, doing so should never interfere in the search process.

At least four individuals with whom Montemagno previously worked have interviewed for campus positions since his appointment.

“When something crosses into the realm of a transaction, or if there’s some suggestion that there may have been a coercive element — and I’m not saying there is — to maintain overall integrity on how we do searches, we need to look at that, and it’s worthy of an inquiry,” Dunn said.

As for the details into the hiring of the Germains, Dunn said even though spousal hires are fairly common, he called the request to hire family members unusual.

But, Dunn said Montemagno made his intentions to hire family clear as soon as contract discussions began in June.

“No one can blame him for not being pretty upfront about that as the negotiations went underway,” Dunn said of the chancellor.

Even though requests such as salary, moving expenses, benefits and travel expenses are typically incorporated into the chancellor’s contract, it’s common for some items to be left out of the written contract.

The agreement to allow for family hiring was made verbally since Dunn and the General Counsel deemed it inappropriate to put in the written contract.

But the decision to allow for this agreement was not easily reached, said Dunn, who added he was given a directive by the Board of Trustees that “I needed to do whatever I could to make this [hire] happen.”

After wrestling with this directive and coming to a consensus with the board that the decision was not illegal, unethical or immoral, Montemagno’s request was supported, he said.

“Legally, it looked like we were probably OK with a broad reading of nepotism law,” Dunn said. “Then I went ahead and moved forward.”

Dunn said the assumption on his part was that while there was an agreement to allow for the hiring of family members, he thought it would go through a typical search process opposed to appointments without searches, as ended up being the case.

Aside from the chancellor mentioning his knowledge of many researchers and scientists who would love to continue their work in Carbondale, no verbal agreement or discussion about Montemagno bringing on previous coworkers took place, Dunn said.

“We’ve had a campus that’s come through the worst two years fiscally speaking that it’s ever seen since its founding days,” Dunn said, referring to the budget impasse that left hundreds of positions at SIU unfilled. “In some cases, departments were barely hanging on, so to think that the irony that we’re going to bring in two new people for jobs that may or may not exist at that point was a tough one for me.”