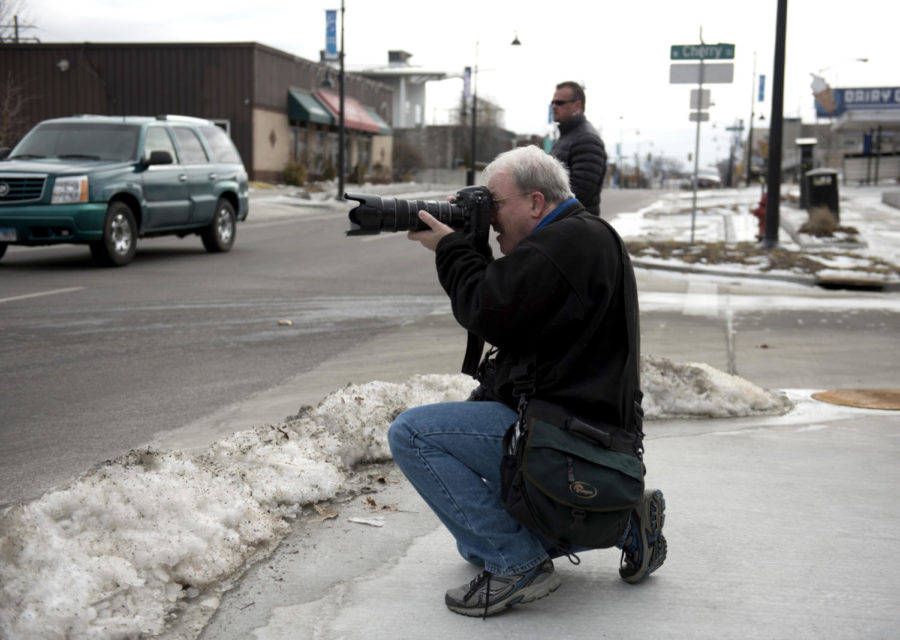 Photographs showing the life-changing experience of Peace Corps volunteer and local photojournalist Richard Sitler are on display at The Varsity Center through Feb. 2.

After volunteering with the organization for 12 years, Sitler decided to travel alongside Peace Corps volunteers and document their experiences.

Sitler’s fascination with the Peace Corps began when he was a child in Knightstown, Ind.

After earning a degree in History from Blackburn college in 1990, he was accepted into the volunteer program.

In 1991, he was sent to the Dominican Republic for training but became sick and was sent home on medical discharge.

Sitler returned to the U.S. and worked for several years as a photojournalist, never forgetting about his experiences in the Peace Corps.

At 30-years-old, Sitler felt it was now or never to rejoin the Peace Corps. In 1998, he reapplied and was sent to Jamaica in 2000 as an at-risk youth advisor. He worked in Lluidas Vale, a part of rural Jamaica where no other volunteer had worked before.

“What most people know about Jamaica in the United States is really far away from what my experience of Jamaica was,” he said.

Sitler was placed in The Parish of Saint Catherine, a sugar cane plantation that dates back to 1620 and hasn’t changed since the times of slavery.

One day while Sitler was looking out over the cane fields with his supervisor, the supervisor said to Sitler, “Richard, nothing much has changed here since slavery.”

Everyone in the community was connected to the sugar cane plantation by having relatives who worked there or residents working there.

Since leaving the Peace Corps, Sitler said he is always in the constant mindset of being a volunteer.

“Even when you’re at home, you’re still a Peace Corps volunteer,” he said. “In my yard I’d go wash my clothes, hang my clothes, it was like living in a fishbowl. You never turn that off,” he said.

Toomey, who is now working in the Rural Health and Social Service Development Center at SIU, volunteered in Madagascar from 2011 to 2013,  later returning to do Peace Corps response, a short-term program dealing with high-impact situations, in 2014 to 2015.

Toomey was an environment volunteer while in a very rural and mountainous part of Madagascar. She worked with rice farmers in the area where she taught them techniques such as how to increase their yields and use less water.

Toomey also collected funding to invest in infrastructure where she and other volunteers built a bridge and connected the divide between two parts of the rural area where she lived.

She also taught and developed a guide for learning English. Geared toward park guides in particular who dealt a lot with tourists.

“People are so friendly and welcoming where I lived and it was so isolated but I felt really safe and welcome,” Toomey said. “I had a really hard time coming back to the United States,” he said.

Toomey developed deep relationships in the community she volunteered in, which was home to approximately 300 people.

While volunteering there, she experienced the same living conditions as the people she was helping.

“I had to go 18 miles round trip to get food,” Toomey said. “I didn’t have running water. We had a spigot that was right next to my house so in the wet season it would run but when it dried out you had to walk a kilometer for water,” she said.

Coleman, a premedical student working as a graduate assistant at SIU, was a Peace Corps education volunteer in Tanzania from 2014 to 2016.

He was a Biology and Chemistry teacher in the Southern Highlands of Tanzania, a mountainous region with an approximate population of 2,000 people.

Coleman’s first year was mainly spent getting acclimated to the country and the new lifestyle.

After a long period of work in Tanzania, Coleman was given the opportunity to launch a conference with other volunteers in the country to create a discussion about issues affecting Tanzania.

Coleman and the other volunteers selected the best and brightest students and they came together to talk about sensitive topics like HIV/AIDS, nutrition, and the possibility of going to college. These students were then sent back to teach their peers what they had learned.

He also launched a project that encouraged young girls to go into STEM fields. Coleman and other volunteers were later featured in Michelle Obama’s Let Girls Learn initiative.

“I think for me since, I was able to develop relationships and just get out there and be in the community more, you kind of remove your American view from the situation and accept` your situation for what it is.” he said.

Staff writer Kitt Fresa can be reached at [email protected]