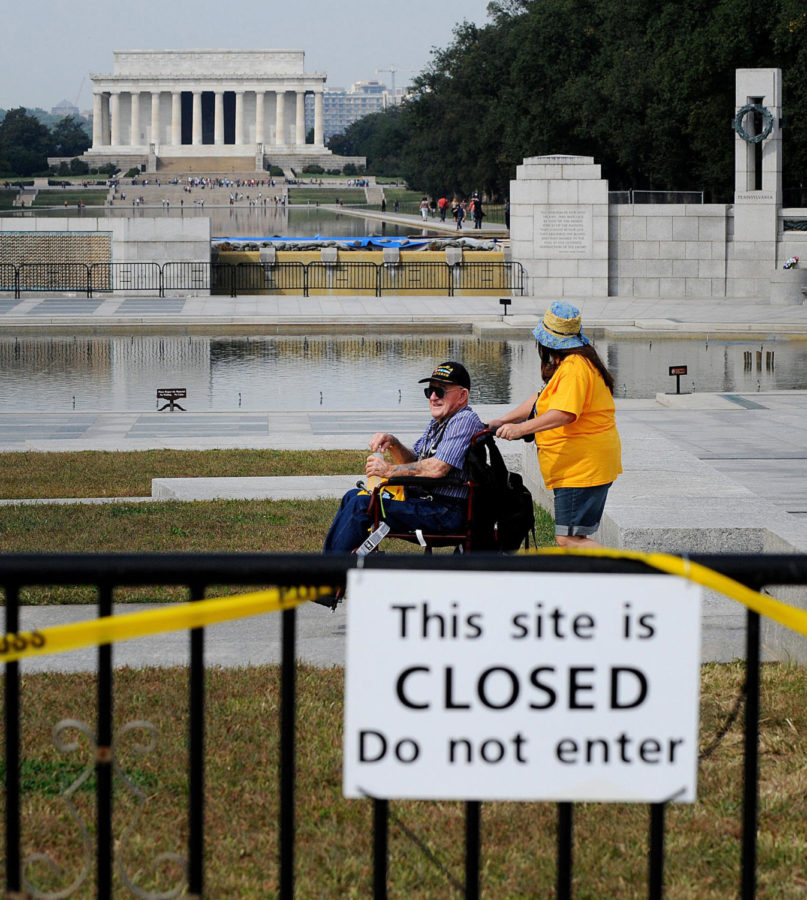 With a government shutdown looming, President Donald Trump reached out Friday to Senate Minority Leader Charles E. Schumer and invited him to the White House for talks, according to two sources familiar with the negotiations.

Schumer, a New York Democrat who cut a previous budget deal with Trump last fall over the strong objections of GOP leaders, was headed to the White House, the sources confirmed.

The meeting comes as Congress pushed the federal government to the brink of a shutdown. Senate Democrats — joined by some GOP deficit hawks and immigration allies — were set to filibuster a stopgap funding bill ahead of a midnight deadline.

Trump postponed his weekend getaway to Mar-a-Lago as the livelihoods of federal workers hung in the balance. White House Budget Director Mick Mulvaney put the shutdown odds at “50 to 60 percent” as preparations were underway to halt paychecks and limit some services during a funding lapse.

Lawmakers scrambled to assign blame for what would be the first federal shutdown since 2013, when Republicans led the unpopular 16-day closure in their failed effort to repeal the Affordable Care Act, or Obamacare.

House Republicans on Thursday approved a stopgap funding bill, but the four-week measure to keep government running through Feb. 16 was expected to be blocked Friday in the Senate, where Republicans have a 51-seat majority but need 60 votes to break a filibuster.

Republicans blasted Democratic senators for holding the funding “hostage” as Democrats demanded deportation protections for “Dreamers,” the young immigrants brought to the U.S. illegally as children. Their protected status could expire soon as Trump ends the Obama-era Deferred Action for Childhood Arrivals program.

“Democrats are needed if it is to pass in the Senate — but they want illegal immigration and weak borders. Shutdown coming?” Trump tweeted Friday morning. “We need more Republican victories in 2018!”

Republicans started characterizing the crisis as the “Schumer Shutdown.”

A mix of immigration advocates, including Sen. Lindsey Graham, R-South Carolina, and deficit hawks like Sen. Rand Paul, R-Kentucky, have announced their opposition. Other Republicans may join them. Sen. Jeff Flake, R-Arizona, who has worked with Graham and Democrats for years on immigration issues, said he was “not inclined” to support the monthlong spending bill and wanted a short extension for a few days to keep government running while immigration talks continued.

House Speaker Paul D. Ryan, R-Wisconsin, promised the conservative House Freedom Caucus he would work toward a “conservative” immigration bill in exchange for their votes on the temporary spending bill. The bipartisan compromise Trump panned last week remains on the table.

The House, though, was scheduled to adjourn Friday for a weeklong break. Some lawmakers, including Majority Leader Kevin McCarthy, R-California, had travel plans, but his office said McCarthy would not go to Switzerland for the annual globalist confab at Davos if the government shuts down.

GOP aides insisted Friday no other temporary measures would be considered.

“As the clock ticks toward another deadline, inspire our lawmakers,” the Senate chaplain, retired Navy Rear Adm. Barry Black, intoned as he opened Friday’s session in prayer. “May they humbly seek to do what is best for our nation and our world, achieving together what cannot be done without allies.”

Senate Majority Leader Mitch McConnell, R-Kentucky, decried Democrats for having “shoehorned” immigration into the funding debate when Congress has until March before the program expires.

A Republican effort to attract Democratic votes by attaching a six-year extension of the Children’s Health Insurance Program, a priority for Democrats, was panned by House and Senate Democrats and failed to bring more support.

“This is completely unfair and uncompassionate,” McConnell said Friday.

He said there is no imminent deadline facing the DACA program.

Voters, McConnell said, “will see which senators make the patriotic decision, stand up for the American people and vote to continue government funding.”

Democrats, though, are counting on polling showing that Americans overwhelmingly support protections for the young Dreamers. Their stories of having arrived in the U.S. as kids, unaware of their illegal status, and going on under the Obama program to work, attend school or join the military have generated widespread support as emblematic of the American dream.

“If you want to know the urgency, look into the gallery behind me,” said Sen. Richard J. Durbin, D-Illinois, Thursday evening, as immigrants filled the visitor section during the debate.

“Why are they here? There is an urgency in their lives because of the uncertainty of tomorrow — whether tomorrow will mean deportation for themselves and their families,” he said.

New polling out Friday may help clarify who will be held responsible. By a 20-point margin, Americans pinned blame on Trump and Republicans who control Congress, 48 percent, with 28 percent blaming Democrats, according to the ABC/Washington Post poll. It said 18 percent would blame both equally. Independent voters would blame Trump and Republicans by a similarly wide margin.

Durbin and Graham lead a bipartisan, and growing, group of senators backing a bill to provide Dreamers with legal status and a 12-year pathway to citizenship in exchange for the $2.6 billion Trump requested this year for a U.S.-Mexico border wall and security, and other family and diversity immigration visa changes.

Republicans need at least a dozen Democratic senators to reach the 60-vote threshold on the bill, the fourth temporary measure this fiscal year. Of the 18 Democrats who supported the previous temporary spending bill in December, at least 10 have switched and said they will not support this one. Some have simply tired of Congress funding the federal government for weeks at a time.

“It’s a failure of leadership and I’m here today to say, no more. Not on my watch,” Sen. Jon Tester, D-Montana, said in a blog post.

Among those expected to vote no are the Democratic senators from Virginia, Sen. Mark Warner and Sen. Tim Kaine, who represent large numbers of federal workers.

Mulvaney insisted the government would ease the pain of the shutdown, and national parks — popular with Americans — are expected to remain open.

The long-term impact, though, remains in flux.

The Fitch Ratings agency said Friday that the shutdown would not immediately impact the United States’ credit rating, but if the debate drags into the spring fight over the need to raise the nation’s debt ceiling, that could change.