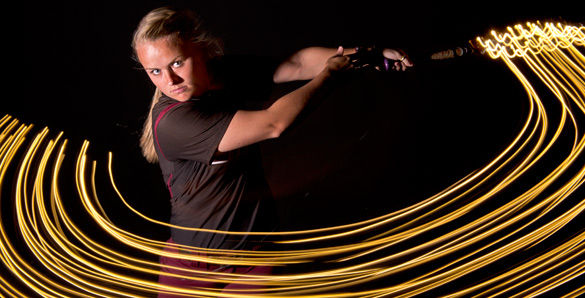 One of my favorite moments in the history of sports took place on a softball field, but it certainly was not my performance in a home run derby.

April 26, 2008. Western Oregon University played Central Washington University. WOU’s senior right fielder Sara Tucholsky hit her first career home run, but injured herself at first base. Tucholsky would have been called out if any of her teammates touched her, and it would have been ruled a two-run single if the coach used a pinch runner.

Two players on Central Washington’s team showed sportsmanship by carrying Tucholsky around the bases to make her home run official. They stopped at every bag to touch her left foot on every base because they said she deserved it. The moment won an Excellence in Sports Performance Yearly Award for the best moment, and inspired me to become a sport’s reporter.

This week, I challenged senior second baseman Jayna Spivey to a home run derby. Any swing that did not send the ball over the fence resulted in an out. We each received six outs to rack up as many home runs as possible.

Spivey broke the school record for RBIs, and is tied for the team lead with three home runs this season. She is in the top ten in the Missouri Valley Conference in eight offensive categories this season and has been named an All-Conference athlete her first three years.

I hit a couple of doubles in little league, but primarily either drew a walk or struck out looking. My baseball career ended in middle school after two consecutive thumb injuries. I lost a lot of development time and decided to throw in the towel.

We both were allowed three outs, and Spivey went first. After watching her in batting practice, I felt doomed. It seemed like every ball she hit went the distance.

My patience at the plate ssticks with me today. It was my first time swinging a bat in years, so I took the first couple of pitches. Spivey later said she wished she could be less eager at the plate.

That wasn’t going to make a difference; at that point Spivey already had two home runs. When I finally took a rip at one, it went as far as a bunt.

I made contact with all three pitches, but none of them even came close to the fence.

Spivey added one more home run, which gave her a 3-0 lead as I headed to my last three outs. I hit one ball out of the infield, but hit no home runs. To no surprise, Spivey won.

Like myself, Spivey is a Chicago Cubs fan. I wore my Cubs hat, and instantly got grief from head coach Kerri Blaylock. She said if it were a St. Louis Cardinals hat, I might have won the competition, but my guess is I would not have made any contact.

Regardless of what the coaches said, the players cheered every time I made contact, which cancelled Blaylock’s grief, and eliminated any excuse I had for a bad day at the plate.

It was interesting hitting softball pitches. The angle a softball pitcher takes allows the ball to move up in the zone instead of sinking like a baseball. Every pitch seemed to be an inch off the ground, but in reality they were all hitting the strike zone.

Spivey earned the MVC Player of the Week days after our competition by hitting .692 with three doubles, a home run and six RBIs in four games.

Spivey and the Dawgs play at Bradley University this weekend in a three-game series.