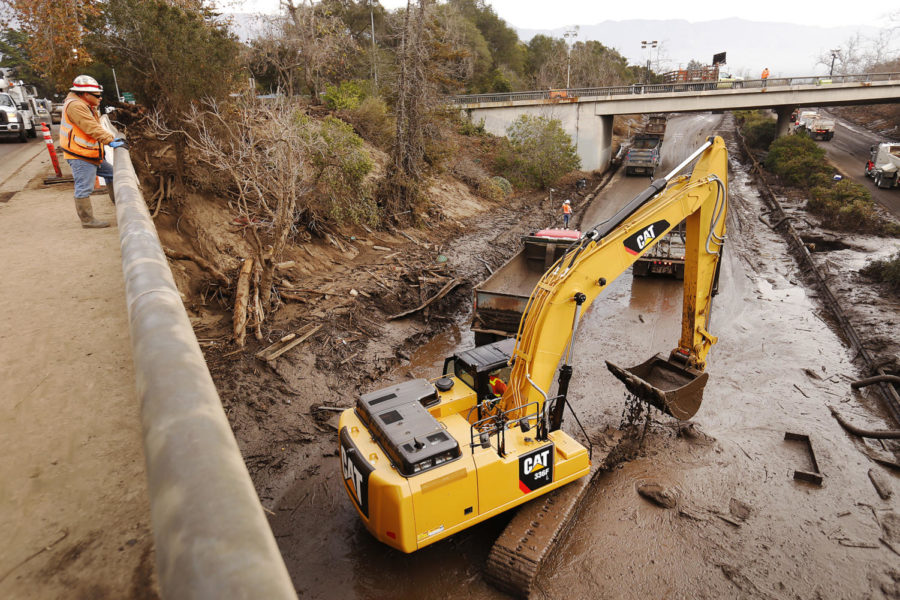 Jose Gonzalez with Granite Construction directs crews from the Olive Mill Road bridge as they work to clear the 101 Freeway, which remains flooded with mud and debris under the Olive Mill Road bridge in Montecito, Calif. on Tuesday morning January 16, 2018. Officials hope to reopen the 101 freeway by Monday, January 22, 2018. A rain storm hit one week ago as the Santa Ynez Mountains deposited mud and debris into Montecito neighborhoods, killing more than 20 people. (Al Seib/Los Angeles Times/TNS)

A somber candlelight vigil Sunday drew thousands of people who paid tribute to victims of devastating mudslides that have already killed at least 20 people in a Southern California town ravaged by water and muck.

Mourners gathered outside the Santa Barbara County courthouse, where they lit candles, said prayers and left flowers at a makeshift memorial for the victims.

Sunday also saw crews manning earth-moving machines in Montecito as they attacked mounds of mud, boulders and debris in hopes of finding four people still missing in the murky mess.

Authorities discovered the body of 30-year-old Pinit Sutthithepa Saturday while recovery crews continued their search for the missing after the mudslides began devastating the enclave on Tuesday.

Sutthithepa’s 2-year-old daughter, Lydia, was still missing, but his 6-year-old son and his 79-year-old father-in-law died in the mudslides.

“Tonight, we need to mourn,” Santa Barbara County Supervisor Das Williams said. “It is breathtakingly horrible. Our community is going through something it has never gone through.”

More than 2,000 searchers and recovery workers combed the area after a powerful storm swept in from the Pacific and inundated the mountain slopes with enough rainfall to create a deadly avalanche of mud and debris.

The area was recently ravaged by wind-driven wildfires that included the Thomas Fire, the state’s biggest on record, that left hillsides in places like Montecito barren and vulnerable for the destruction brought by the first downpours of the region’s rainy season.

Residents wanting to pray for themselves and their neighbors were forced to attend worship services in nearby towns.

“Our whole community is devastated,” Hannah Miller said at the Trinity Episcopal Church. “There isn’t anyone who doesn’t know someone who has been affected by this disaster. It is truly awful. We can just pray they find those poor missing people.”

“No one could have planned for the size and scope of what a 200-year storm immediately following our largest wildfire could bring.”

State crews continued to work Sunday to clear a 2-mile stretch of freeway that was expected to reopen Monday but likely won’t. Officials said they struggled with the work because the road sits at one of the lowest points in the city and continues to draw water and mud.

The mudslides have destroyed at least 65 homes and damaged over 460, according to officials.

Those killed in the mudslides were all Montecito residents, ranging in age from 3 to 89, authorities said.