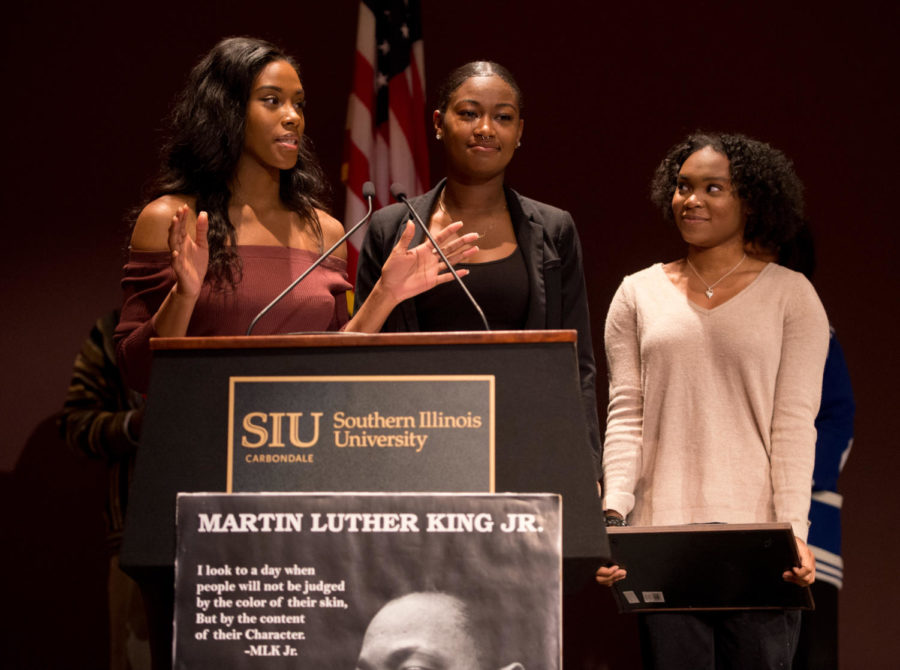 SIU cheerleaders Ariahn Hunt, Alasyia Brandy, both of Chicago, and Czarina Tinker, of Nashville, Tennessee, speak in front of a packed crowd Monday, Jan. 15, 2018, during the Carbondale NAACP Martin Luther King Jr. breakfast in the SIU Student Center. The girls were recognized for their willingness to protest police brutality by kneeling during the national anthem at sporting events. (Brian Muñoz | @BrianMMunoz)

The National Association for the Advancement of Colored People in Carbondale honored three SIU cheerleaders at the 36th Annual MLK Breakfast.

At the breakfast three sophomore cheerleaders Ariahn Hunt, Alaysia Brandy and Czarina Tinker were recognized for kneeling during the national anthem at the athletic events in order to protest against racial oppression.

Kneeling during the anthem became a common practice at American athletic events when San Francisco 49’ers quarterback Colin Kaepernick kneeled in protest to racial oppression in 2016.

When accepting the certificate, the cheerleaders thanked everyone for their support.

Dr. Linda Flowers, NAACP Carbondale Branch president, said “They are college students whose courage transcends cheerleading. They have risked their safety, dare I say their cheerleading careers, to protest violence and injustices to African Americans.”

Flowers said the cheerleaders’ courageous actions are strong examples for older Americans to follow in standing up against racial oppression.

“I’m just so proud that our hard work finally paid off,” Hunt said. “For something that was meant for all of these people in this community and our town. As long as we are cheering we are kneeling.”

Brandy described the feeling of being honored at the event as an “out-of-body” experience.

“It’s been hard for all of us,” Hunt said. “It wouldn’t have been the same without the support from the SIU campus and the community around here.”

Agreeing with Hunt, Brandy said that especially with the negative pushback the three cheerleaders received, the community’s support means the world to them.

Hunt said she was really honored to be in front of all these people on this special day of one of our greatest heroes of America.

After supporting the cheerleaders’ right to protest in October, Chancellor Carlo Montemagno was not present during the event.

Vice Chancellor Lori Stettler said that Montemagno was currently on a fundraising campaign with university alumni for the SIU Foundation.

Stettler was supportive for the cheerleader’s right to protest.

“The three young ladies were recognized for their courage in standing up for what they believe in,” Stettler said. “That is foundational to everything we believe in as a society and as an institution.”

The university has made improvements, Stettler said, in certain areas of its inclusiveness. The campus is a small representation of the divide in the country’s society that still has work to be done in terms of equality and equity across the university.

Staff writer Jeremy Brown can be reached at [email protected]