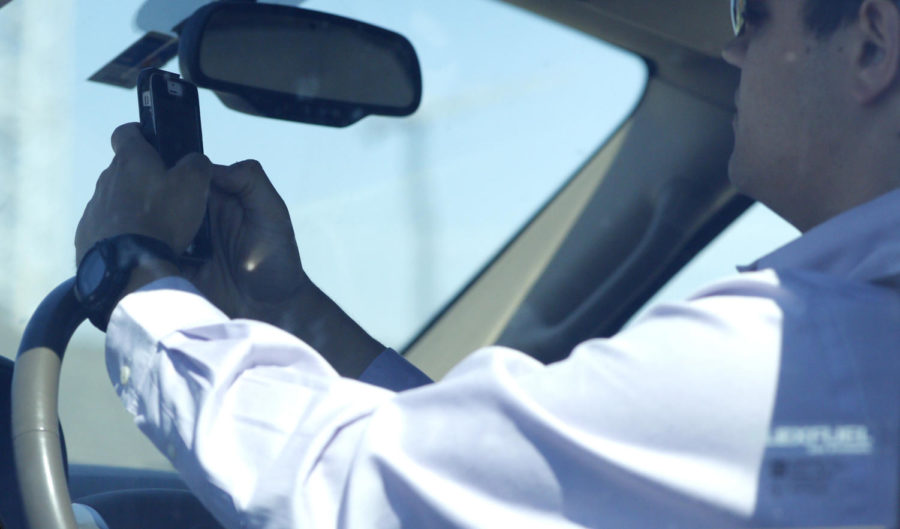 A man looks at his phone while driving down Woodall Rodgers Freeway on July 16, 2015 in Dallas. (Rose Baca/The Dallas Morning News/TNS)

Chicago may consider devices to help police determine if motorists were texting before an accident.

Tech company Cellebrite has developed a hand-held device called a Textalyzer, which can determine if the driver was using a cellphone at the time of the accident. The Chicago City Council’s public safety committee voted Thursday to ask for a study on the devices.

Chicago saw the number of tickets issued to motorists using mobile devices fall from 26,000 in 2015 to fewer than 200 in 2016. The reason, according to Fox 32 Chicago: that’s when the police department started requiring officers to appear in traffic court on those tickets.

However, the ACLU of Illinois has raised concerns about privacy and due process regarding cellphones, saying there are other ways for authorities to determine if the motorist was texting. Cellebrite representatives told the council that the devices will not share the content of texts and that the technology is still in development, according to the Chicago Tribune.

If approved, Chicago would be the first U.S. city to use Textalyzers. The proposal was advanced by Alderman Edward Burke, of the 14th Ward, who the Tribune called the “longest-tenured and most powerful” alderman. In late 2017, Burke proposed fining pedestrians up to $500 for using cellphones while crossing the street, which has not advanced to the council.