As new deadline looms, Trump is expected to stay in Iran nuclear deal despite reservations 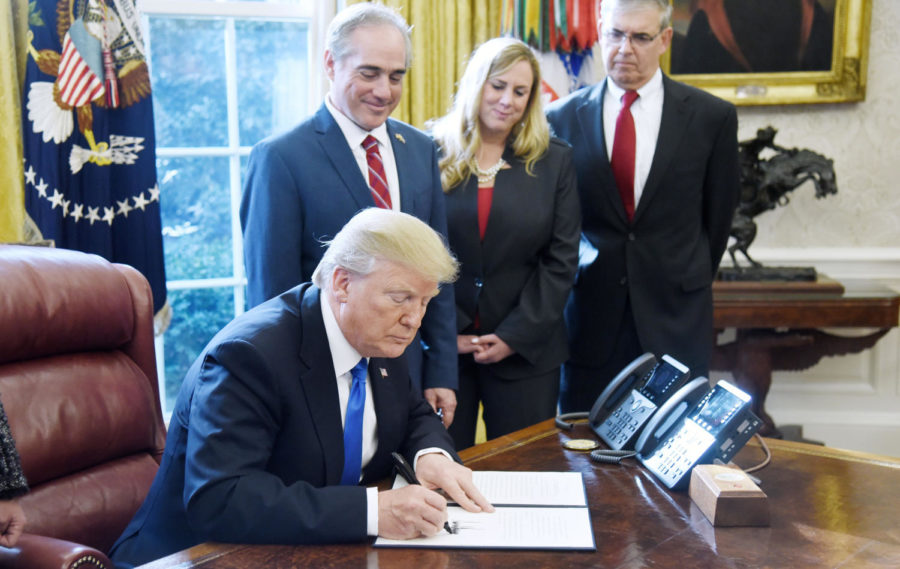 U.S President Donald Trump signs an Executive Order on "Supporting our Veterans during their Transition from Uniformed Service to Civilian Life" on Tuesday, January 9, 2018 in the Oval Office of the White House in Washington, D.C. (Olivier Douliery/Abaca Press/TNS)

With new deadlines looming, President Donald Trump plans to again refuse to certify to Congress that the Iranian nuclear disarmament deal is America’s best interest — but will stop short of reimposing energy sanctions that could kill the landmark accord, according to a U.S. official involved in the process and a person familiar with the deliberations.

The White House is expected to announce the president’s decision, which still could change, on Friday.

The moves would maintain the status quo in place since October, when Trump first declined to certify the deal to Congress but left it intact. The Obama administration and five other world powers negotiated the accord with Iran in 2015 in an effort to block Tehran from building nuclear weapons.

Iran agreed to dismantle or destroy most of its nuclear infrastructure under the agreement. In exchange, the global community agreed to ease economic sanctions related to the nuclear program. Trump has sharply criticized the deal, in part, because it doesn’t limit Iranian development of ballistic missiles and support for militant groups in the Middle East.

Refusing to certify that the agreement is in the best interest of the U.S. allows Congress to weigh in but has no direct effect on the deal itself. Congressional leaders have begun to look at ways to rewrite several key provisions, including possibly eliminating sunset clauses and requiring more intrusive inspections, although it’s unlikely Iran would agree.

Sen. Bob Corker, R-Tennessee, who chairs the Senate Foreign Relations Committee and is involved in drafting the legislation, said last week that a proposed bill is “moving along” but slowly.

Trump’s decision to waive sanctions is far more important. The sanctions relief granted under the nuclear deal opened world oil markets to Iran and allowed it to return to international banking systems and trade, a key boost to its battered economy.

Under U.S. law, the White House must extend those waivers every four months. The next deadline is Friday, and others follow next week, although the administration could delay announcing a decision by several days.

If Trump refuses to extend the waivers, the United States risks being in violation of the international accord, a diplomatic minefield. The U.S. not only would defy other members of the United Nations Security Council, which backed the deal, it could hand Iran a pretext to start limiting U.N. inspections or restart its nuclear program.

“Not certifying only creates the possibility of U.S. non-compliance,” said Jarrett Blanc, the State Department coordinator for implementing the agreement under the Obama administration. “Not waiving the sanctions presents a prima facie case for U.S. non-compliance. … It is deeply uncharted territory.”

Trump’s top national security aides, including Secretary of State Rex Tillerson and Defense Secretary James N. Mattis, have said they don’t like the Iran pact but have urged Trump to stick with it. Tillerson also has worked with Germany, France and England to prepare to reimpose sanctions, as the nuclear deal allows, if Iran shows signs of backsliding.

“U.S. credibility in terms of our willingness to enter into international agreements, or even our interest in so doing, has already been damaged, and this would be a major blow,” said Holgate, now a senior fellow at Harvard’s Belfer Center for Science and International Affairs.

The nuclear inspection agency has repeatedly verified that Iran is in compliance with the accord, which required Tehran to dismantle its main nuclear reactor, drastically cut back on uranium enrichment, get rid of thousands of centrifuges and export most of its heavy water.

Despite the nuclear deal, most U.S. trade with and investment in Iran is banned under separate U.S. sanctions for its human rights abuses, ballistic missiles and support for terrorism. U.S. sanctions also target the Islamic Revolution Guard Corps, the elite military force that is active in regional hot spots, including Yemen, Syria and Iraq.

Trump could move to expand those non-nuclear sanctions, targeting more government officials, or businesses owned by senior clerics, for example, without jeopardizing the nuclear accord.

Trump’s decision on whether to stay in the nuclear deal, at least for now, has been complicated by his vocal support for anti-government protests that have erupted across Iran in recent weeks, focusing chiefly on economic concerns.

Critics and proponents of the nuclear accord disagree sharply over whether it has strengthened, or undermined, Iran’s president, Hassan Rouhani, who negotiated the deal, or the hard-liners in Tehran’s clerical leadership.

Sen. Dianne Feinstein, D-California, warned that reimposing sanctions would undercut the protesters’ aims. “Lifting sanctions helped expose their government’s corruption and mismanagement of its economy, and reimposing them now would be turning our back on the Iranian people,” she said in a statement.

Iranian officials clearly are nervous about the decision that Trump will make.

“We are prepared for the worst-case scenario,” Majid Takhi Ravanchi, a senior aide to Rouhani, told Iranian state media, “not only in the political field but even on the economic front.”

Iran’s atomic energy agency suggested that the country could resume and accelerate uranium enrichment if the sanctions are reimposed.