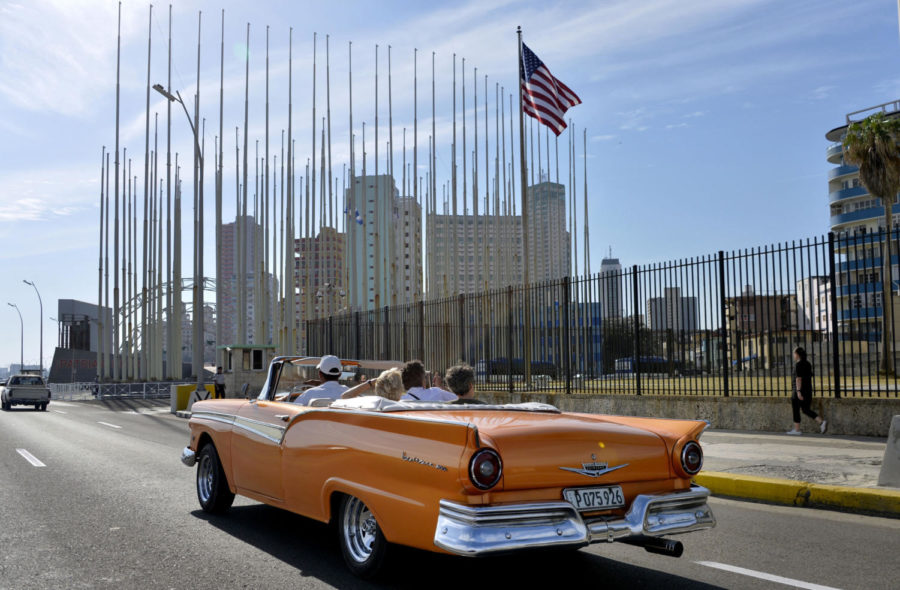 An old car passes in front of the U.S Embassy in Havana, Cuba, on March 17, 2016, prior to a visit by U.S. President Barack Obama. (Olivier Douliery/Abaca Press/TNS)

More than a year after American diplomats in Cuba began suffering hearing loss, dizziness and other ailments from what the U.S. has called “deliberate attacks,” State Department officials told Congress on Tuesday they still don’t know the cause or culprit.

The unexplained illnesses have roiled already-tense diplomatic relations between Washington and Havana; State Department officials say the communist-led government must know who is responsible and how it happened — a charge Cuban officials angrily deny.

“It is incomprehensible to us that [the Cuban government] is not aware who and how and can’t take steps to prevent it,” Franciso Palmieri, the acting assistant secretary of State for Western hemisphere affairs, told a Senate foreign relations subcommittee.

A total of 24 U.S. diplomats and family members have been treated since December 2016 for symptoms that some said followed high-pitched sounds, changes in atmospheric pressure or other unusual phenomena in their homes in Havana or in two hotels where they stayed. The last reported case was in August 2017.

The State Department withdrew most personnel from the U.S. Embassy in Havana last fall and expelled 17 Cuban diplomats from Washington. The two countries only restored diplomatic ties in July 2015 after decades of hostility.

Secretary of State Rex Tillerson told the Associated Press in an interview published Tuesday that he’s not convinced the attacks are over and that he won’t send U.S. diplomats back until the mystery is solved.

“I’d be intentionally putting them back in harm’s way,” he said. “Why in the world would I do that when I have no means whatsoever to protect them?”

An interim FBI report, issued Jan. 4, said agents had found no evidence that air pressure waves via audible sound, infrasound or ultrasound were used to secretly target the Americans, raising doubts about initial reports that the Americans were hit by a futuristic sonic attack, according to the AP.

But Todd Brown, assistant director of diplomatic security at the State Department, told the Senate panel he did not yet rule out an “acoustic element.” He added that other possible explanations also are being considered, including a viral agent or microwaves.

Dr. Charles Rosenfarb, medical director of the State Department’s bureau of medical affairs, likened the symptoms to those experienced by sufferers of a concussion or mild traumatic brain injury.

He said several people had likened it to the uncomfortable sensation one feels when driving a car down a highway with the windows slightly open. Other symptoms included ear pain, vision problems, headaches and fatigue, and the pattern “indicated a non-natural source,” Rosenfarb testified.

He said investigators and doctors could not find a single cause or explanation for the broad range of medical symptoms, although he ruled out what he called “mass hysteria.”

Several Canadian diplomats reported similar medical ailments to the Americans, and Palmieri said 18 Americans visiting Cuba as tourists or on business also complained of physical ills, but he did not elaborate.

Sen. Marco Rubio (R-Florida), the subcommittee chairman, is a vocal opponent of rapprochement with the Cuban government. He said the technology used to target the diplomats was “so sophisticated we can’t even figure it out,” suggesting a country, not a local hacker or other individual was responsible.

He ridiculed one of the causes suggested by Cuban officials for the noise: crickets and cicadas.

“There are two things we know: People were hurt, and the Cuban government knows who did it, and won’t say, for some reason,” Rubio said.