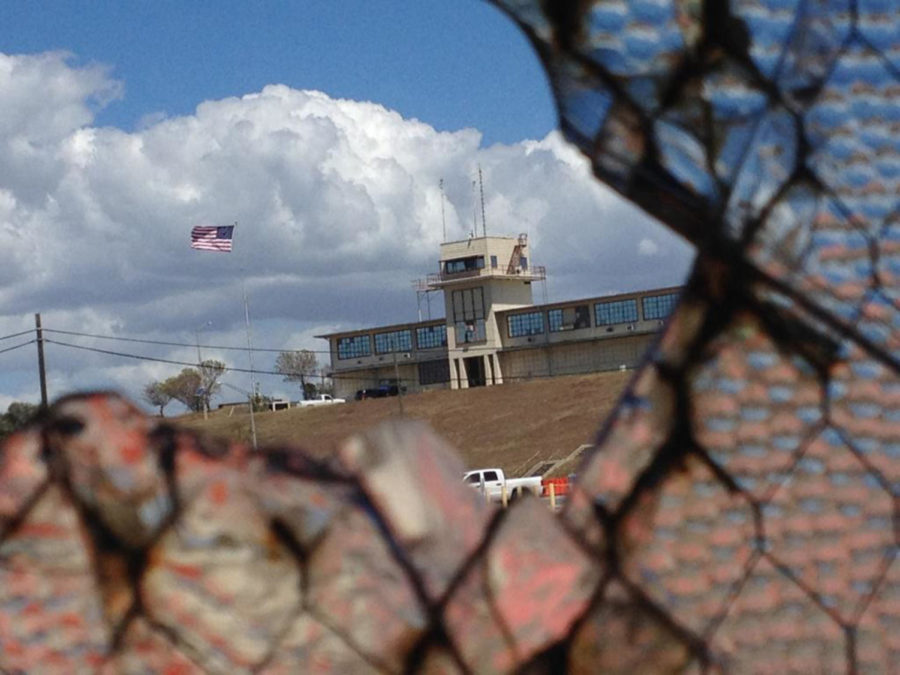 The war court headquarters at Camp Justice, as seen through a broken window at an obsolete air hangar at the U.S. Navy base at Guantanamo Bay, Cuba, on February 28, 2015, in an image approved for release by the U.S. military. (Carol Rosenberg/Miami Herald/TNS)

The first war court session of the year got off to a rocky start Monday with the alleged 9/11 plotters accusing the guard force of sexual harassment by conducting “groin searches” instead of using scanners.

“We be under sexual harassment today for search in being here,” Khalid Sheikh Mohammed announced in broken English in court. The judge, Army Col. James Pohl, was asking the accused mastermind of the Sept. 11, 2001, attacks whether he understood he could voluntarily waive attendance for the rest of this seven-day court session of pretrial hearings.

One by one, the other four alleged plotters echoed Mohammed’s complaints. Alleged plot deputy Ramzi bin al Shibh called it a “sexual harassment search,” and alleged co-conspirator Mustafa al Hawsawi announced he wanted to leave the court immediately, voluntarily. Pohl recessed so guards could remove from the court the Saudi, who suffered rectal damage under CIA custody, along with the pillow he sits on during hearings.

Case prosecutor Bob Swann told the judge that the prison had chosen that day to implement an approved Standard Operating Procedure that permits physical groin searches; the military had in the past used metal detectors and other electronic devices to see whether Camp 7’s high-value detainees had something hidden in their genital areas.

Pohl ordered the prison to bring a witness to explain the change in practice, perhaps as early as Wednesday. Left unclear was whether the testimony would be heard in open court.

The five men are accused of directing or helping the 19 hijackers who crashed four commercial airliners in New York, at the Pentagon and in a Pennsylvania field on Sept. 11, 2001, killing 2,976 people. They were arraigned in May 2012 and the court has been holding periodic pretrial hearings ever since.

The episode was but one of several changes at the war court in the first hearing of 2018, with new faces among the soldiers handling some security arrangements. Mohammed’s defense attorney, David Nevin, said that he was confronted by guards wanting to search his privileged material, and instead locked the backpack he routinely brought to court for years in his car at Camp Justice. He told Pohl that, without his materials, he was under “restrictions in my ability to practice law.”

Pohl ordered the guards to permit Nevin to bring his material to court without a search.

But the groin search issue is not new. At times, it has been litigated in federal court among the general population prisoners, with low-value captives complaining through their lawyers that the physical handling of their genitals was a violation of their Muslim faith.

In 2013, a federal judge prohibited the practice, but then a higher court granted the prison permission to conduct the searches. Different commanders have wielded the power differently, with most using wands and other electronic devices to check the captives’ genital areas.