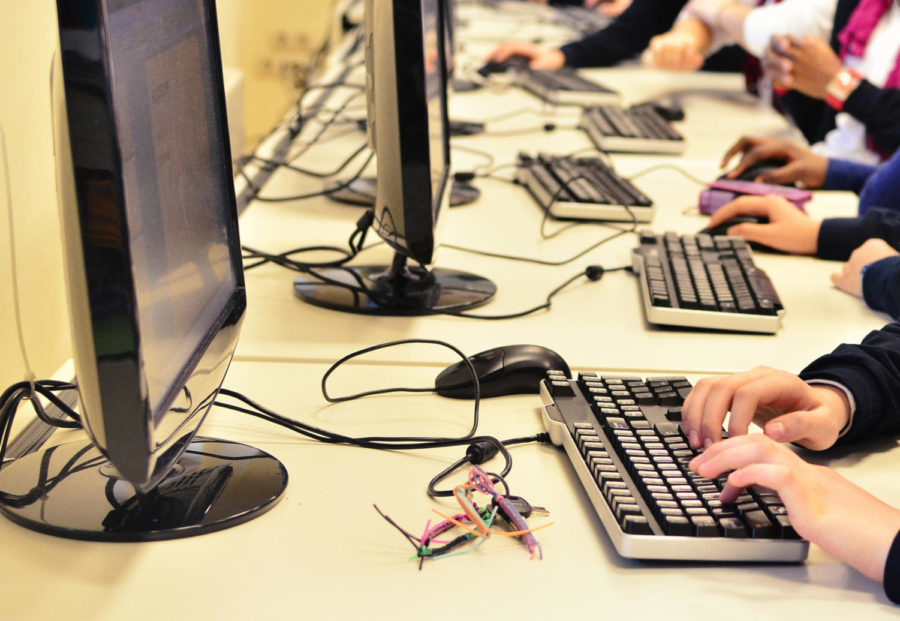 What impact will the net neutrality repeal have on our students? (Dreamstime)

In a roundtable discussion with U.S. Sen. Jeanne Shaheen, D-New Hampshire, at the Hannah Grimes Center for Entrepreneurship in Keene, a handful of small business owners talked about the challenges they might face. Shaheen’s visit was part of a handful of events she held Friday, including a discussion in Swanzey on the need for a unified ZIP code in the town.

Last month, the Federal Communications Commission voted 3-2 to repeal a set of Obama-era rules that required broadband providers to offer equal access to everything online without slowing down certain sites or charging consumers more for loading these sites faster. Though the rules won’t take effect right away, in the long run, the new regulations could change the way consumers access the Internet. According to The New York Times, the new rules will take weeks to implement.

Local business owners told Shaheen that the new rules could also create an Internet environment where content from bigger companies drowns that of smaller businesses.

Shaheen, who sits on the U.S. Senate Small Business and Entrepreneurship Committee, said feedback from Friday’s discussion could help inform future action on the issue.

“I think what this means is that it’s going to be harder for small businesses to compete with big corporations as so much of the policy in the last year has done,” she said.

For Brian Foucher, president of small broadband provider WiValley in Keene, New Hampshire, the new regulations could be both boon and bane. On the one hand, he said, WiValley could commit to being an open-access provider, meaning it would not charge different rates for different content. This strategy could differentiate the company from others in the region, potentially attracting more customers.

“At the same time, we can’t commit to ‘We’re not going to regulate it,’ because on the other side, while we buy wholesale, our wholesale providers are much larger than us,” he said. “They can still put those restraints on us, so we can’t commit to being an open-access provider if suddenly now we get hit with all these fees because of our content.”

But not everyone shares Foucher’s concerns.

“The Internet wasn’t broken in 2015. We weren’t living in a digital dystopia,” he told Reuters in December.

In a statement in December, New Hampshire Gov. Chris Sununu praised the Trump administration for rolling back net neutrality.

“I am not convinced that a repeal of a rule that went into effect just two years ago is going to have the adverse impact that some are claiming,” Sununu, a Republican, wrote. “In a free market, it is the consumers that will ultimately make choices that will incentivize companies to provide a better product.”

Free-market advocacy groups, including Americans for Prosperity-New Hampshire said they supported the governor’s position on the issue.

Other local business owners Friday said Internet service providers will now be able to mute or make it harder for clients to access their services, giving larger companies a virtual leg up online and offline.

“In our business, we’re a content provider — we use the Internet to provide service to our clients,” said Tom Strickland, president and co-owner of Peterborough IT service firm Sequoya Technologies Group. “And so if Comcast or FairPoint decide to … get into my business, and they have, all they really have to do in order to be competitive or chuck me out is turn the dial on the Internet and make my services either too expensive or too slow or inaccessible to my clients.

“We spent a lot of time in the last couple of years making clients’ sites faster because all the data shows that if you decrease the speed of a website by one second, the rate at which you sign up for services drops dramatically,” he said.

The issues business owners have identified are magnified by the lack of broadband choices in the region, said Mary Ann Kristiansen, executive director of the Hannah Grimes Center. The Monadnock Region has only a few Internet service providers — including Spectrum, FairPoint and WiValley — but often, consumers and business owners have little to no choice of providers, leaving them with few avenues for recourse.

“I think the Internet was a great leveler for businesses and for rural areas. You could work from anywhere, that was the promise. … It just feels like another piling on of the rural disadvantage. And we’re seeing that the rural disadvantage has always been there, but I think it’s growing.”