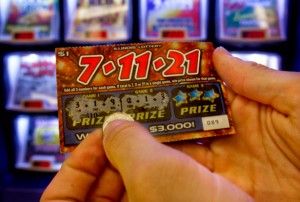 A top staffer for the Illinois Lottery failed to disclose her relationships and contact with lobbyists for a firm that was bidding for a massive contract to manage the lottery, a state investigation has found.

The lack of disclosure led the state’s top contract officer to suspend the contract with the British lottery firm Camelot, potentially worth at least $2 billion, according to records reviewed by the Tribune. The state reinstated the contract last week after a five-week investigation by an outside law firm determined the lapses were not significant enough to affect the fairness of the bidding process, the records show.

Camelot, the only bidder for the contract, took over management of the lottery Tuesday. The state said the staffer resigned Dec. 21, a day after the law firm completed its investigation.

Despite the Rauner administration’s pledge of transparency regarding the process for picking a new lottery manager, officials did not publicly acknowledge any questions about the handling of the bid until contacted Wednesday by the Tribune. The administration had hired the law firm Hinshaw & Culbertson to investigate in early November.

The law firm’s review was contained in a file posted without fanfare Dec. 28 on the website of the state procurement officer as an update to a series of documents related to the lottery contract. The review described how the lottery’s second-in-command, Jayme Odom, had gotten her job through a Republican staffer, Nancy Kimme, who later became a lobbyist for the British firm in the midst of the procurement process and called Odom on the company’s behalf.

Investigators determined that Odom did not disclose that contact with Kimme nor a friendship with another lobbyist for the firm, Eric Elk — lapses that violated both the lottery’s conflict of interest statement and the Illinois Code of Personal Conduct.

Investigators also noted that Odom told fellow lottery employees she was concerned that if her involvement in vetting the company’s bid were disclosed to Tribune reporters, who had sought records related to the bid, they would connect her to the lobbyists and embarrass her.

Instead of immediately releasing the records requested by the Tribune, the agency asked the governor’s office for advice, then brought the same question to a separate state agency responsible for certifying that the procurement followed state law.

When procurement officers got that phone call — and learned of the lobbyist relationship and contact — they said they were “alarmed,” quickly ended the call, de-certified the contract and called for an investigation into the lobbyist contacts, according to the law firm’s review.

In addition to the findings on Odom, investigators determined that another official who helped vet the lottery proposal also did not disclose a friendship with Elk. That person, Michael Mahoney, left his job as a Rauner policy adviser last year and now works for House Republicans. Reached Wednesday afternoon, he told reporters he had to go to a meeting and would call back later that day. He did not do so.

The law firm’s review concluded that although Odom and Mahoney should have disclosed their relationships with the lobbyists and Odom should have disclosed her contact with Kimme, their actions “did not affect the (evaluation) committee’s work” and there was “no evidence that any evaluation committee member was improperly influenced by Camelot lobbyists.”

Camelot, in a statement released Wednesday, cited those findings to say the report validated the process that landed the firm the multibillion-dollar contract.

“The report found that the evaluation proceeded with integrity and free from conflicts of interest,” the firm said. “It focuses on the conduct of two state employees and concludes their omissions had no impact on the procurement’s process or outcome.”

The report details the latest snag in Illinois’ first-in-the-nation efforts to privatize the management of its lottery. State officials fought bitterly with the first private manager, Northstar Lottery Group, over who was to blame for the state not receiving the massive injections of cash projected in Northstar’s proposal, accepted in 2010.

Along the way, the Tribune documented how the agreement created a special Northstar-controlled “advisory” board whose politically connected members’ pay was not disclosed. The Tribune also reported that the lottery, under Northstar management, collected hundreds of millions of dollars from selling tickets to instant games in which it did not hand out all of the life-changing grand prizes — sometimes awarding no grand prizes before ending a game.

Amid the years of questions over Northstar’s performance, Gov. Bruce Rauner in 2016 announced the start of a process to replace the company.

Odom, who became a key player in that process, had been named to a top job at the lottery in January 2015.

At the time, Rauner needed to fill administration jobs and turned to Kimme, a longtime staffer in the state comptroller’s office, according to the law firm’s review and state records. Kimme was “tasked with, among other things, finding a state job for Odom,” who at the time was the executive director of the Illinois Republican Party, records show.

According to the investigation, Kimme asked Odom what job Odom might want and Odom responded with “an idea of what she wanted to do.” Kimme returned with an offer to serve as the lottery’s chief of staff, which Odom accepted.

The job paid Odom $110,000 a year, which investigators noted meant she received a “significant pay raise.”

In her new position, Odom maintained a friendship with Elk, whom Camelot hired as a lobbyist the same year, and helped Elk arrange a meeting between Camelot officials and Odom’s then-boss at the lottery, investigators said.

Although Camelot was the only company bidding to take over for Northstar, the process still required its proposal to be vetted by a five-person committee.

But investigators questioned the “veracity” of those statements, noting that Mahoney had changed his story and that others present at the committee meeting didn’t back up their claims. One top procurement official who attended the meeting, Jan Morrow, was “emphatic” that no committee member had discussed being friends with a lobbyist, let alone a lobbyist with the firm they were evaluating.

By March 2017, Kimme had left her state job and become a lobbyist. Camelot, frustrated with how long the vetting process was taking, hired Kimme to lobby on its behalf, investigators said.

“One of the first steps Kimme took was to contact Odom,” investigators said.

As part of the vetting process, investigators noted, all questions from Camelot were supposed to be submitted to two people in official procurement positions in the lottery and state government. Odom was not one of them. Yet Kimme acknowledged to investigators that Odom knew Kimme was a lobbyist for Camelot and that, during their call, Odom updated Kimme on the status of the procurement process.

Less than two weeks after Camelot hired Kimme, investigators found, the lottery notified Camelot that it had cleared a key step in the vetting process and was considered the sole finalist for the contract.

Camelot told the Tribune it did not ask Kimme to make the call or know that she had done so.

Odom told investigators she couldn’t remember Kimme calling. Odom did not inform any ethics officials in state government that a Camelot lobbyist had contacted her directly, something investigators said should have been disclosed.

Regardless, investigators found, Odom did not want her connection to Kimme to become public.

Last fall, after the state formally announced it planned to award the contract to Camelot, the Tribune sought records on the vetting process and ultimate agreement with Camelot. The Tribune later reported that the terms of the contract appear more generous to Camelot in key ways than the agreement signed with the first firm.

But state officials initially withheld the names of the committee members who vetted Camelot’s proposal — even though they previously had identified the people who vetted the Northstar proposal years earlier.

The investigation report reveals why. According to the report, the lottery’s in-house lawyers told Odom that both past cases and the lottery’s past practice supported releasing the names to comply with the Freedom of Information Act. But Odom remained reluctant. She told an in-house lottery lawyer that, though she believed she’d done nothing wrong, she feared the Tribune would discover her relationship with Camelot lobbyists and publicize it.

Investigators called that statement “compelling evidence that Odom knew that her personal relationships with Camelot lobbyists” might be viewed as a conflict of interest.

“Odom knew that the Tribune had a history of aggressively reporting on the Lottery’s activities,” the report stated. “Odom was concerned that the newspapers would become aware that she participated as an evaluation committee member, and her concern stemmed precisely from the fact that she had personal relationships with Camelot lobbyists.”

Both Morrow and her boss, Ellen Daley, told investigators the relationships were a “red flag” indicating potential problems. That same day, Oct. 30, Daley sent a memo withdrawing her certification that the procurement process had followed state law. She wrote that she was worried her earlier certification had been based on “false information” that there had been no potential conflicts of interest.

It was a significant development in the procurement process, but the lottery did not announce it.

The lottery also released the list of names of those who served on the committee.

The governor’s office later decided to hire the outside law firm. A Rauner spokeswoman did not address how much the investigation cost the state, but she said the administration acted swiftly once it discovered potential wrongdoing, noting that the full report found no actual conflict of interest and that it was eventually posted on the procurement website.

“The Rauner Administration has been transparent in its process,” spokeswoman Patty Schuh wrote in an email.

The lottery declined to make acting director Gregory Smith available for an interview. Agency spokesman Jason Schaumburg issued a written statement that defended its actions as “fully transparent” and said the vetting process was not compromised.

“Although the disclosure lapses in the process identified by the report are unfortunate, they do not diminish from the fact that this procurement process has been certified by the (chief procurement officer) and that the investigation determined they did not affect the work or results of the evaluation committee,” Schaumburg wrote in an email.

On Dec. 28, Daley wrote to the lottery that she had reviewed the law firm’s findings and determined that the disclosure failures were not enough to throw out the contract that resulted.

“While I believe the actions of the two evaluation committee members … failed to comply with the procurement process, it did not affect the integrity of the evaluation process,” Daley wrote in a memo to the lottery.

Morrow told the Tribune that procurement officials have not withdrawn their complaint with the executive inspector general’s office, but she did not know if that office had begun an investigation. The office declined to comment.