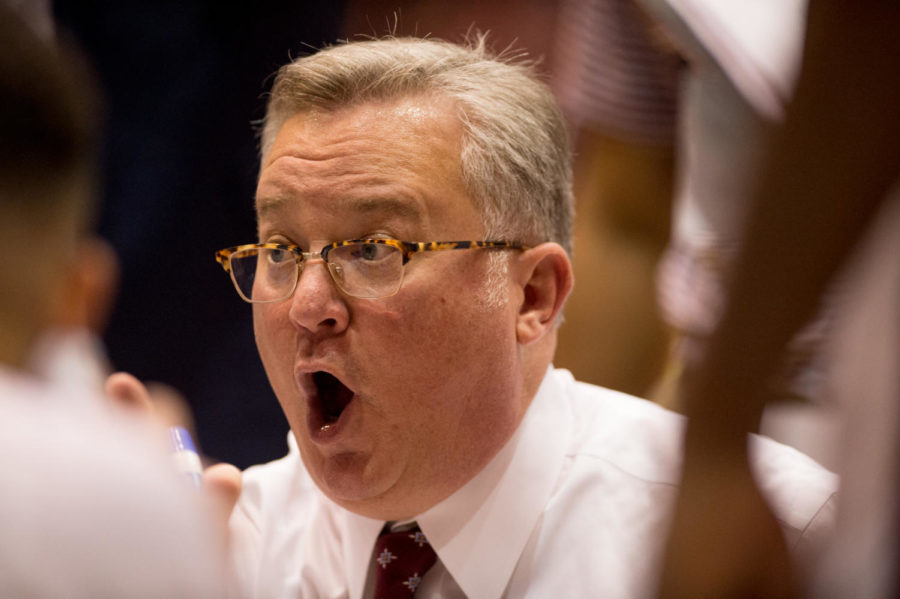 Coach Barry Hinson speaks to the team during a time out Wednesday, Nov. 29, 2017, during the Salukis’ 86-59 win against SIUE at SIU Arena. (Brian Muñoz | @BrianMMunoz)

The Salukis handed the San Jose State Spartans (2-5) a 76-58 loss on Saturday afternoon at SIU Arena.

With a well-balanced attack on offense and defense, Southern outplayed the Spartans in all aspects of the game. The Salukis outrebounded an SJSU squad that had not been bested in rebounds all season.

“It was a point of emphasis all week to crash the glass,” senior forward Jonathan Wiley said. “Their length was something you don’t see too much, especially at the mid-major level.”

Scoring was limited in the first half, as both teams played tenacious defense that made points hard to come by.

After Wiley — who finished with 10 points and two blocks – scored the opening bucket of the game on a layup, SIU never allowed San Jose State to claim a lead.

“My coaches wanted me to be aggressive tonight,” Pippen said. “I just tried to be aware of when the double-team would come and make the right decision.”

Pippen finished the game with 22 points and shot an efficient 9-10 from the field. He also added three blocks and four steals on the day.

At the 10-minute mark of the half, the game experienced a scoring drought that lasted over 3 minutes. The lull broke when the Spartans earned two points at the free throw line.

Southern’s lead was attributed to its smothering defense that held SJSU to a 35.3 field goal percentage. The Saluki defense only allowed 17 shot attempts and forced 13 turnovers in the half.

Notably, Southern did not reach the free-throw line once in the first, which was where the Spartans earned seven of their 20 first-half points.

Despite a lack of free throw opportunities and a 1-10 effort from 3-point range, the Salukis took a 29-20 advantage to half.

The second half began much different than the first, as SIU exploded for a 15-6 scoring run that spanned just under four minutes.

Almost immediately after the run was broken, Southern went on another 12-2 run that made the score 56-31. The scoring burst was capped by a powerful dunk by junior guard Armon Fletcher off an assist from junior guard Eric McGill, who had just forced his fourth steal of the game.

“I keep telling my guys to unleash themselves defensively and the offense will come,” Saluki head coach Barry Hinson said. “When it comes, it’ll come in waves. It came in waves tonight.”

From there, SIU held their lead and reached the free throw line often where they converted at a 92.3-percent clip.

SIU returns to action Wednesday night, as they travel to St. Louis to play the Saint Louis Billikens. Tip-off is scheduled for 7 p.m.

Sports writer Ryan Demer can be reached at [email protected] or on Twitter at  @RyanDemer_DE
To stay up to date with all your SIU sports news, follow the Daily Egyptian on Facebook and Twitter.