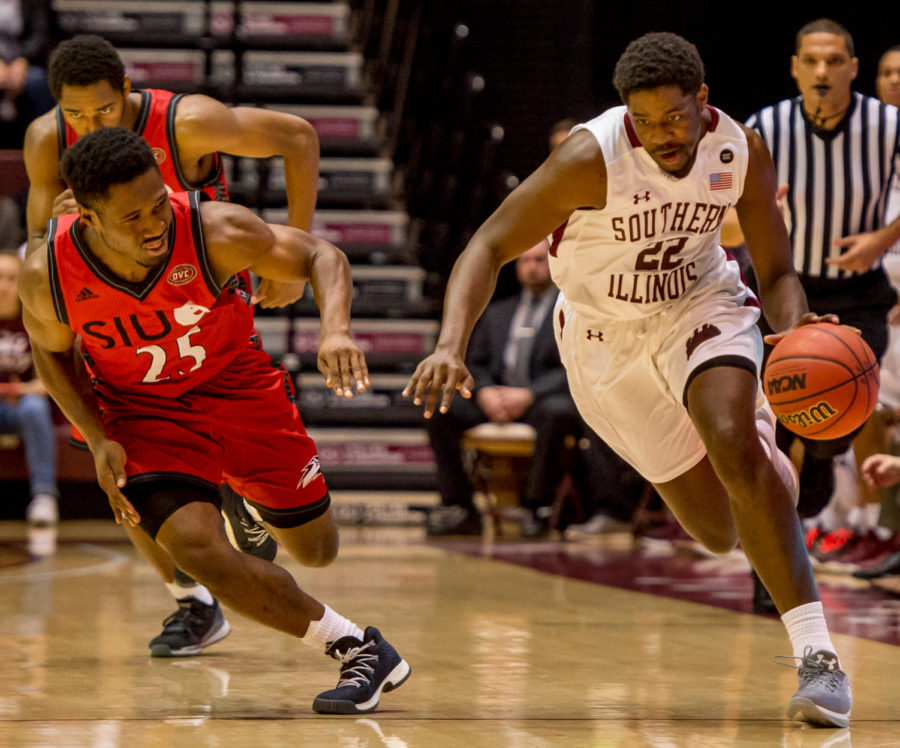 The Salukis men’s basketball team clobbered SIU-Edwardsville (1-5) by a score of 86-59 on Wednesday night at SIU Arena.

After they lost two consecutive road contests, the Salukis returned home to Carbondale and hoped to turn their fortunes around.

“It feels good being on the other end of these blowout games,” junior guard Armon Fletcher said. “We need to continue getting on teams early and not letting up.”

From the opening tip, Southern laid its smothering pressure upon the Edwardsville offense. SIUE shot a measly 19.4% in the first half.

“They were the aggressors unfortunately for us,” SIUE head coach Jon Harris said. “We missed some shots, but I think they had a lot to do with that.”

Both teams were unable to score for nearly the first two minutes of the game until SIUE knocked down one of two free throws.

Soon after, SIU exploded for a 10-0 run in a span that lasted over five minutes and was capped off with two layups from junior center Kavion Pippen. The offensive surge helped the Salukis claim an early 10-1 lead.

“All week we worked on getting KP the ball down low,” senior forward Jonathan Wiley said. “Once he starts getting doubled, it opens up everything for us.”

Immediately after SIUE broke its cold streak with a layup, the Salukis responded with yet another scoring run. The 13-0 run — which included five points from sophomore guard Aaron Cook — lasted nearly four minutes and increased SIU’s lead to 23-3.

As the Salukis shot 4-10 from beyond the arc in the half, the Cougars never cut into the lead significantly. The closest they came to catching the Salukis was an 11-point disadvantage with just over 10 seconds left in the first half.

As the clock ran down, Cook stalled until he got a last-second opportunity for a layup, which rimmed out. Pippen — who recorded six points and seven rebounds in the half — was there to tip the ball in and beat the buzzer that ended the half with a 35-22 lead for SIU.

Early in the second half, Pippen continued his solid play and successfully reached a double-double stat line.

In addition, Wiley converted on two spectacular and-one plays. One of the three-point plays came on a fade-away jump shot and the other on a fastbreak layup after he earned a steal. He recorded a double-double with 12 points and 10 rebounds and added two blocks and two steals.

The Salukis went on a 16-3-point scoring run that lasted just under four minutes and continued to build upon their lead.

Right after SIUE responded with a bucket, the Salukis went on another offensive tear. Southern used a 19-5 scoring run that made the score 78-39.

Southern smothered SIUE on the defensive end all night and once they got their scoring in motion in the second, the Salukis could not be stopped.

SIU eventually built a 40-point lead late in the game with four minutes remaining. The Salukis slowed down on offense from there and SIUE went on a 13-0 run at the end of the game.

“I really wasn’t happy about that and addressed it with my squad,” head coach Barry Hinson said. “We defended really well all game until the team decided to take a Marriott vacation.”

All but one player on SIU’s roster recorded an assist. On a highly efficient night of offense, 20 of the Southern’s 31 field goals came via an assist.

The Salukis (3-2) are in action again on Dec. 2 where they will matchup against San Jose State. Tipoff is scheduled for 3 p.m. at SIU Arena.

Sports writer Ryan Demer can be reached at [email protected] or on Twitter at  @RyanDemer_DE
To stay up to date with all your SIU sports news, follow the Daily Egyptian on Facebook and Twitter.