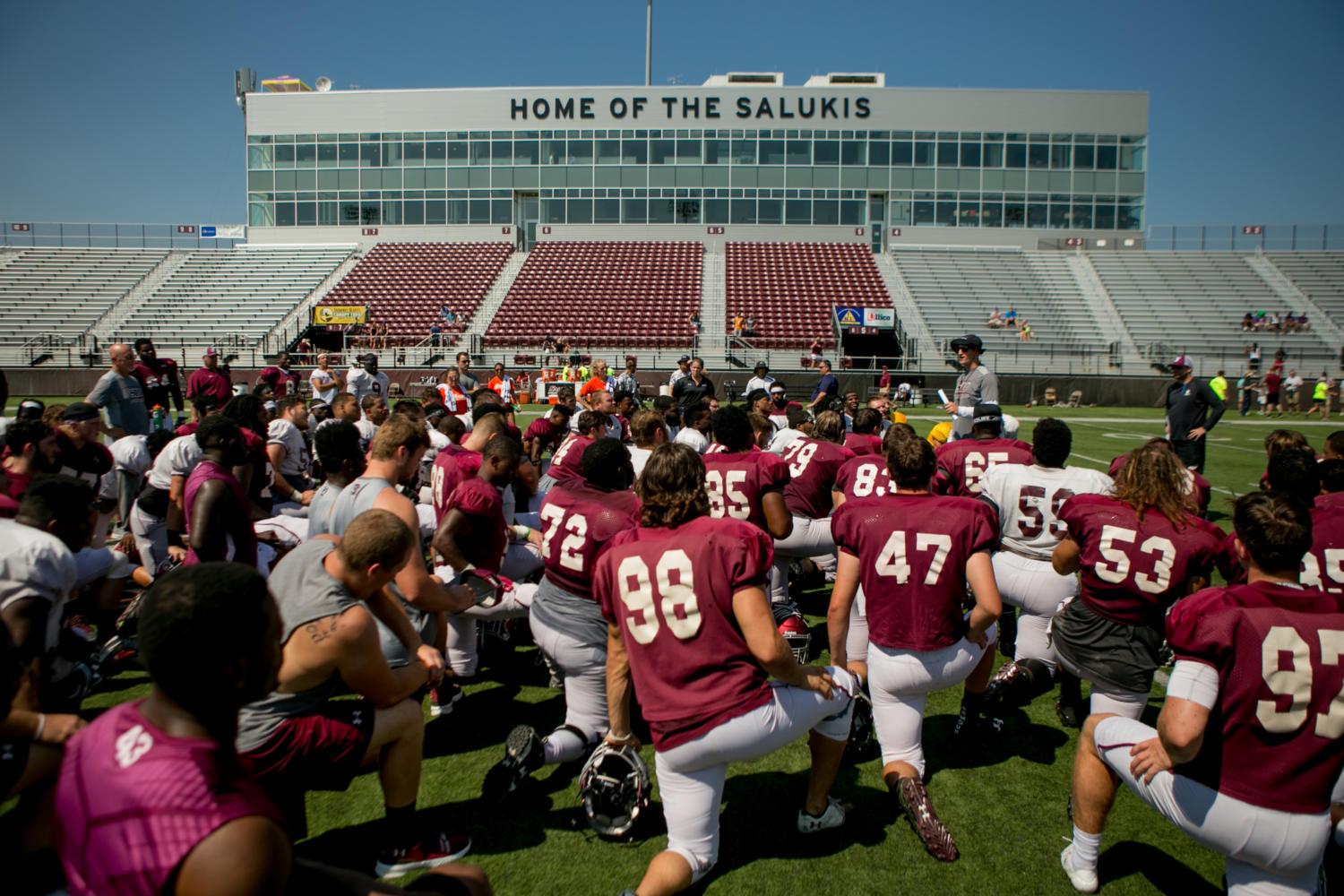 Coach Nick Hill talks to members of the Saluki Football team Saturday, Aug. 19, 2017, after the second scrimmage of the season at Saluki Stadium. (Brian Muñoz | @BrianMMunoz)

Sophomore punter Lane Reazin was the lone Saluki that earned a First Team selection. In 11 games, he led the MVFC in punt average with 43.6 yards per punt and ranked seventh in the category in all of FCS football.

Reazin also led Southern to a 38.3-yard net average per punt, good for second in the MVFC and 16th in the country.

Sophomore safety Jeremy Chinn earned Second Team honors after he was named an Honorable Mention selection in the preseason. He recorded three forced fumbles throughout the season which ranked second in the MVFC.

Senior offensive tackle Austin Olsen was also named to the All-MVFC Second Team. With 33 consecutive starts since his first game as a sophomore, Olsen finished his career with two MVFC Offensive Lineman of the Week awards.

Olsen finished last season as an Honorable Mention and was named a Preseason All-MVFC member. Olsen anchored the Saluki offensive line that allowed the fewest sacks in the MVFC.

Senior fullback Hans Carmien was an Honorable Mention for the second year in a row. The former walk-on ended his career as an integral member of the Saluki pass protection.

Carmien recorded seven receptions on the season and found the end zone once.

Sophomore running back D.J. Davis was selected as an Honorable Mention for the second year in a row. Utilized as a return specialist and running back, Davis finished second in the conference in all-purpose yards, with 1,373 yards on the season.

Davis also led the MVFC with 693 kick return yards. His 21.7 yards per kick return were good for fourth in the MVFC.

Starting all 11 games, he registered 6.5 sacks on the season, which ranked sixth in the MVC and first on the team. In addition, he led all MVFC freshman in sacks, tackles for loss, and tackles for loss yardage.

Knighton finished second for the MVFC Freshman of the Year award and was named a Jerry Rice Award finalist, an award that goes to the most outstanding freshman in all of FCS football.

Junior wide receiver Darrell James was selected as an Honorable Mention, his first career All-MVFC honor. James led the team in all statistical categories among receivers. His eight touchdowns ranked fourth in the MVFC, while his 773 receiving yards ranked fifth in the conference.

James also finished seventh in the conference with 47 receptions.

Senior safety Ryan Neal wrapped up his career at SIU with an All-MVFC Honorable Mention selection. Starting all 11 games, he led SIU with 84 tackles, which ranked sixth in the conference.

Neal earned MVFC Player of the Week honors after a monster game in the Week 2 matchup at Southeast Missouri State. In that game, Neal recovered a fumble and scored on a 52-yard pick six.