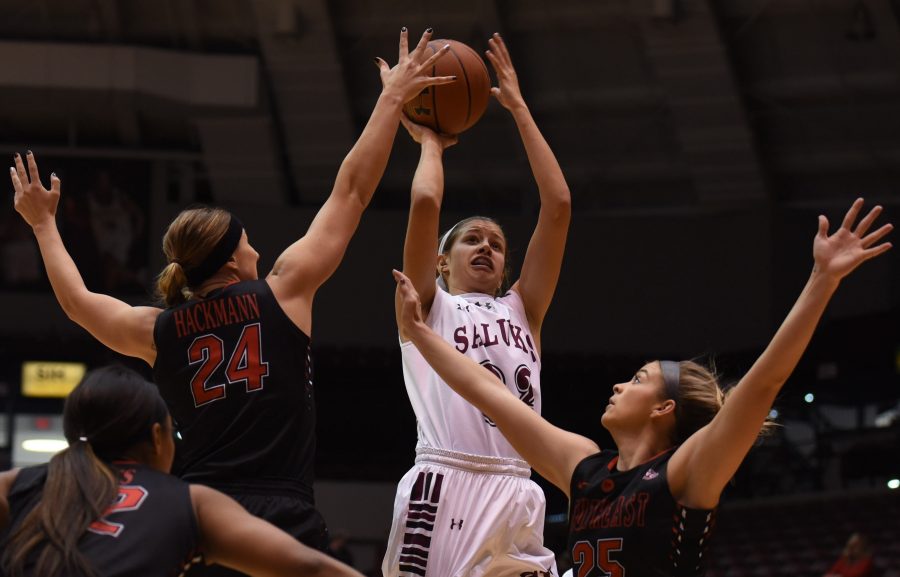 In Wednesday’s matchup against SEMO (2-3), the Salukis looked to earn their second win on the road and end the road trip with a victory before they returned home.

Southern held a commanding 27-7 series lead against the Redhawks and won the last three meetings.

The Salukis counted on scoring contributions from the entire squad, as 10 different players added points and accumulated 25 points off the bench for SIU.

SIU’s defense shined in the first quarter and forced nine SEMO turnovers in a ten-minute span. Southern struggled to score, however, and the frame ended in a 10-10 tie.

Sophomore guard Tiajaney Hawkins got the Salukis going in the second quarter. She scored a layup and followed with a jumper that sparked a 6-0 Southern run. The offensive spurt gave the Salukis an 18-12 lead.

Junior guard Ashley Hummel made her presence known late in the second quarter with a bucket from beyond the arc. She followed with a layup that extended Southern’s lead to 29-20.

The Salukis ended the half with drama as sophomore guard Brittney Patrick sank a buzzer-beating layup that gave SIU a 34-25 lead.

In the third quarter, Southern extended its lead to 38-26 with back to back free throws from sophomore forward Nicole Martin and a layup from freshman forward Abby Brockmeyer, who led the team with 15 points and seven rebounds on the day.

SEMO found its stride midway into the quarter, as senior guard Kaley Leyhue sank back to back 3-pointers in a 36-second span that narrowed the SIU lead to 43-38.

The Salukis struggled with ball control in the third quarter and gave up seven turnovers that allowed the Redhawks to tie the game at 48 points each.

The fourth quarter went down to the wire, as both teams traded points and settled at a 67-67 tie with 32 seconds left to play.

Martin — who finished with 14 points and six rebounds in the game — drew a late foul and earned a chance for the potential game-winning free throws. The sophomore sank one of the two attempts which increased the intensity of the game.

The Redhawks drew a late foul that gave them a chance to complete a late comeback 14 seconds left in the game.

SEMO hit one free throw that knotted the score at 68 points each at the end of regulation.

The Salukis refused to go down without a fight and rattled off nine unanswered points. Freshman guard Makenzie Silvey sparked the run with a three-pointer that increased her point total to 12 and helped SIU seal the victory

The Salukis (3-1) will return to SIU Arena on November 27 to take on SIU-Edwardsville. Tipoff is scheduled for 6 p.m.