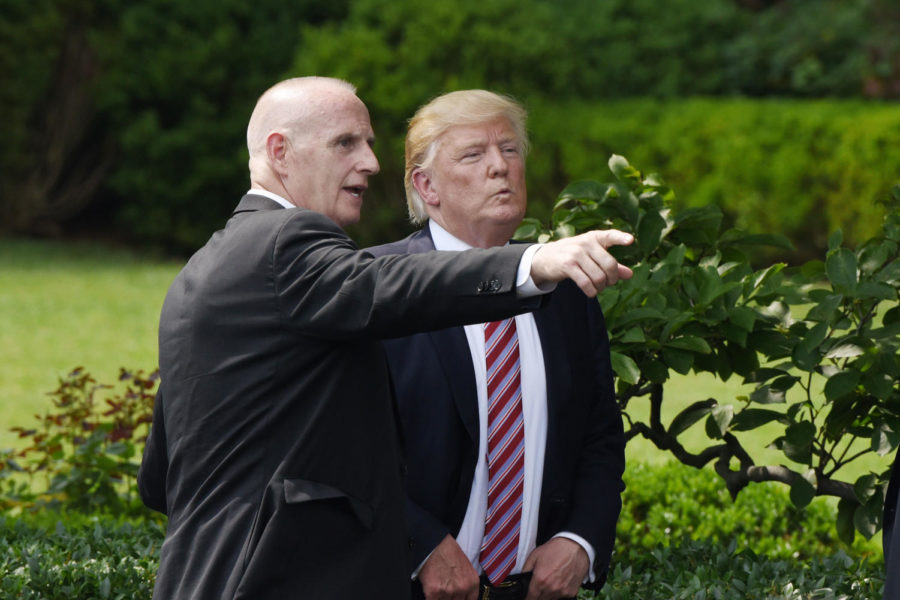 Keith Schiller, deputy assistant to the president and director of Oval Office operations, talks to President Donald Trump during a ceremony on the South Lawn of the White House in Washington, D.C., on June 12, 2017. (Olivier Douliery/ddp USA/Sipa USA/TNS)

A former Trump bodyguard told members of Congress that a Russian operative offered to “send five women” to Donald Trump’s Moscow hotel room after a 2013 business meeting, but the Trump camp turned the offer down.

According to NBC News, the pitch came after a meeting in preparation for the Miss Universe Pageant, which was held in Russia that year.

Longtime Trump bodyguard Keith Schiller shared the story as part of his testimony to the House Intelligence Committee, which is investigating Russian meddling in the 2016 election.

Schiller told the panel he considered the offer a joke, and quickly rejected it.

“We don’t do that type of stuff,” Schiller said, according to NBC.

Schiller was disputing allegations made in a Trump dossier, written by a former British intelligence operative, that describes an encounter Trump allegedly had with prostitutes at the hotel during the pageant.

“Oh my God, that’s bulls**t,” Schiller said, according to NBC.

That night, Schiller said, he discussed the conversation with Trump as the future president was making his way back to his hotel room, and they both laughed about it before Trump went to bed — alone.

Schiller, who followed Trump to the White House as director of Oval Office operations, said both he and Trump were aware of the risk of hidden cameras in Moscow hotel rooms.

Schiller said he spent a short time outside Trump’s door before going to his own hotel room, the report said.

“We are appalled by the leaks that are coming from partisan insiders from the House Intelligence Committee,” Schiller’s attorney, Stuart Sears, said.

“It is outrageous that the very committee that is conducting an investigation into leaks — purportedly in the public interest — is itself leaking information and defaming cooperative witnesses like Mr. Schiller.”