For the love of death: art history professor brings passion for ancient funeral culture to SIU 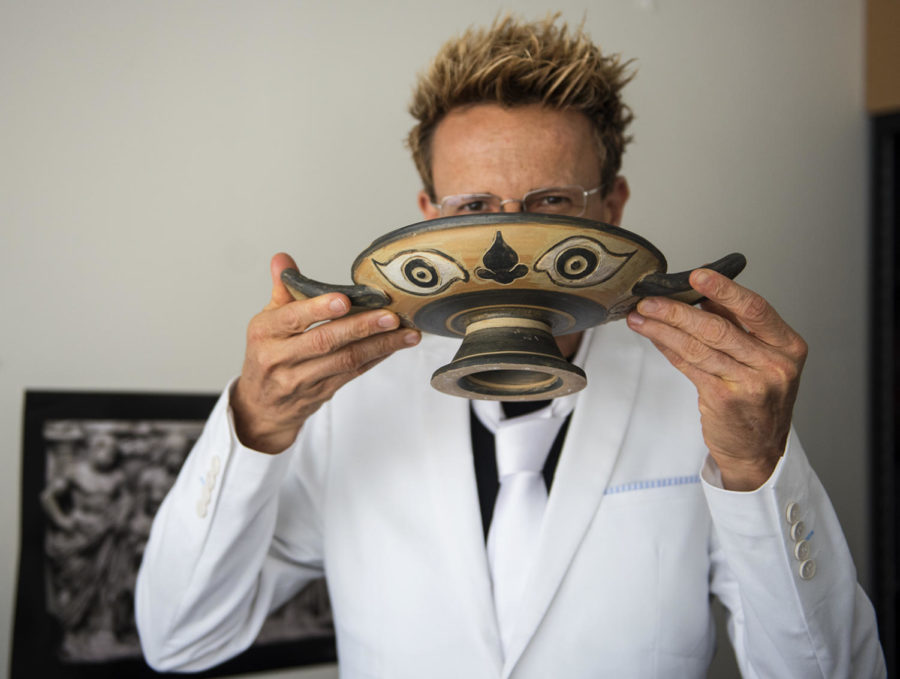 Dr. Mont Allen demonstrates how Greeks would drink from the bowl revealing the eyes and nose painted on the outside, Friday, Oct. 19, 2017, inside his office in Faner Hall. (Mary Newman | @MaryNewmanDE)

A scholar of ancient art history and Roman sarcophagi, Mont Allen was fathered by an Olympian and raised on a U.S. Army base in Germany. Now he teaches classics and art history at SIU to impart the knowledge he’s learned throughout his life in academia.

For 18 years, Allen lived on a base in Mannheim, Germany, but he said it might as well have been the United States.

“I didn’t learn a word of German in my 18 years there because they’re so isolated,” Allen said. “Imagine you’re a 15-year-old American kid and yet here you are going to high school in a little American town in the middle of Germany. It’s a surreal experience.”

He lived there in the 1980s while the Cold War was still underway. At the time, there were a million Americans in then-West Germany affiliated with the U.S. military. The base itself was fenced off on all sides, and Allen said whenever there were any threats the base could shut itself off from the outside world.

Although he lived on a military base, his family was made up of civilians; his parents were schoolteachers.

“Those bases are so huge that they had to provide all the services that you normally expect to find in any decent-sized American town,” Allen said.

Allen said the high schools there had American sports teams that would travel on the German Autobahn on the weekends to play teams at other U.S. bases.

“You have American letter jackets, I mean all the paraphernalia of the model 1950s fantasy American high school experience,” he said. “It’s just recreated there and plopped down artificially in the middle of Germany.”

Allen’s father, Michael Gary Allen, was an Olympic athlete in road cycling. In 1964, he was on the U.S. Olympic team for the 100 kilometer road race in Tokyo.

“In 1964 to ’63, he was the fastest American on a bicycle,” Allen said. “He’s got the immune system and the constitution of a horse. The man never gets sick.”

When Allen graduated high school, he attended the University of California, Berkeley, where he got his bachelor’s degree in geography. He went on to get his master’s in the history of religion at Syracuse University before returning to Berkeley for another master’s in modern European history and a doctorate in ancient art history.

He earned his doctorate after completing a project in Rome and Berlin, where he studied ancient Roman sarcophagi, Greek and Roman funerary sculpture, ancient sculptural tools and techniques, Greek mythology, Roman painting and late antique religions.

“I did most of my doctoral research in Berlin because a lot what I do is archaeologically based,” Allen said. “But then I go to Rome in Italy to look at the Roman coffins, that are really special to me. How’s that for macabre and morbid? What I look at are the myths that Romans carved on their coffins. The myths that they chose to decorate their own funerary receptacles.”

Allen said he fell in love with ancient art history because of all the traveling he and his parents would do during their summers off since from teaching. He said he was also influenced by ’60s movies set in the ancient world, like Ben-Hur and Spartacus.

His specific love for Roman sarcophagi comes from something more personal.

“I’m a grown up goth,” Allen said. “When I was younger I was just one of those kids who wore nothing but black and all the jewelry and the bat paraphernalia, rings with spiders on them … I just liked tombs, and this kind of imagery associated with funerals and death.”

He said although he doesn’t consider himself a goth anymore, he finds funerary art provides a great look inside a culture.

“Roman coffins and the myths on them give you privileged insight into knowing Romans themselves, what they thought was most important about life and how they wanted to be remembered,” Allen said. “I just find that moving and touching. It kind of grabs you in a personal and psychological level in a way that other things don’t.”

When Allen was studying sarcophagi in Rome, he said he went from museum to museum photographing every surviving funerary artifact he could get his hands on.

The Romans produced coffins in such large quantities that tens of thousands survive today, he said.

Allen said he is also fascinated by the way myths were used to help ancient people understand their lives.

“How Greeks and Romans themselves imagine their own world and their own place in the world, the meaning of life, the cosmos, imagine political events, imagine their gender relations through a mythological lens, that’s what I do, really,” Allen said.

Romans chose the myths carved onto their coffins to reflect themselves, Allen said, citing the legend of Hercules as a popular example.

But some of the stories chosen can seem strange at first glance, he said. Allen keeps a picture of a Roman sarcophagus behind his desk. This coffin tells the Greek myth of Medea.

“[She] marries a Greek prince, a hero, goes back to Greece with him, they have two kids, but later on, her husband — a hero named Jason — has a mid-life crisis,” Allen said. “He wants to jilt his wife, get a hot Ferrari and a hot trophy bride, and he essentially jilts Medea and her two kids there and she’s totally stranded, she’s a foreigner and here she is in Greece.”

Because Medea was a divorced woman, she had no protection in the ancient world, Allen said.

“So she has her vengeance by killing her own two kids and then escaping, that’s the story of Medea,” he said. “What would [the sarcophagus] have cost, translated into modern dollars, $600,000? You think, ‘Why would an ancient Roman woman spend roughly $600,000 so that all her future generations of descendants could see the story of Medea on her coffin?’ Like, who on Earth would want to be remembered as a killer of children? The people looking at this are going to be your own family members.”

With interests centered around European history, Allen said he never imagined ending up in the Midwest.

Still, he said he’s glad he did.

“Carbondale’s really grown on me,” Allen said. “I came here for the people.”

Staff writer Kitt Fresa can be reached at [email protected] or on Twitter @kittfresa.