The haunting of Hundley House 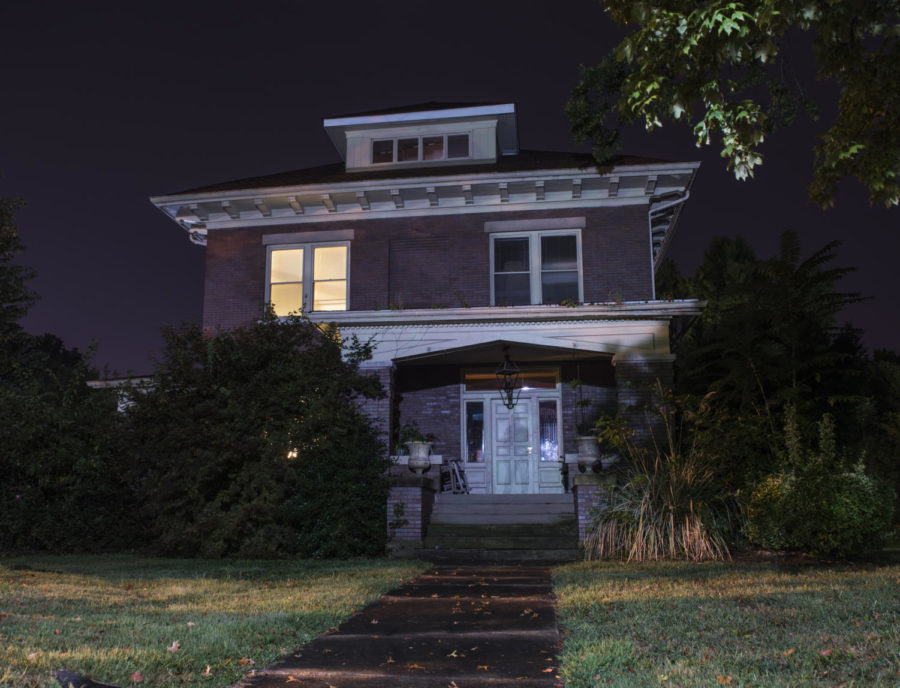 Nearly 90 years ago, the end of two lives sparked the beginning of a local legend.

As a storm raged in Carbondale on Dec. 12, 1928, the sound of gunshots fused with thunder just before midnight.

Many believe they have haunted the house ever since.

The Hundleys were prominent members of the Carbondale community. J.C. had served as mayor in 1909-10 while his wife Luella — as she was known — was a local philanthropist and the daughter of an early settler of Herrin, just five miles to the east.

Luella was the second wife of J.C. In his first marriage, he had a daughter named Lola, who was living in Memphis at the time, and a son, Victor, who lived next door with his wife and their 7-year-old daughter.

J.C. Hundley was retiring for the night in his room upstairs. After putting on a nightshirt, he relaxed at the foot of his bed.

According to “The Big Book of Illinois Ghost Stories,” Luella was apparently downstairs writing a letter at her desk before heading to bed.

The police report from that night says the killer was hiding behind the bed frame in J.C.’s room.

J.C. was shot in the back of the head, causing him to fall back on his bed.

Luella was shot on the back staircase, twice in the head and once in the heart. At least one of the bullets passed through her and created a hole in the staircase that remains to this day.

Dan Jones, who has owned the house for nine years, said Mrs. Etherton, a neighbor of the Hundleys, heard the gunshots as she was up with a colicky baby. Etherton didn’t see the murder, but she did see the killer turn off the light in J.C.’s room before disappearing into the night, Jones said.

Luella died at the scene but J.C. was still alive when the police arrived, moaning and clinging to life, Jones said. J.C. died on his way to the hospital.

The back door to the house was shut but left unlocked, according to “The Big Book of Illinois Ghost Stories.”

The murder of the Hundleys is still unsolved.

There are a number of theories as to who killed the couple.

Scott Thorne, the owner of Castle Perilous and organizer of local ghost tours, said he leans toward the theory that Victor Hundley, the son, was the murderer.

“He and and his sister were the ones who gained most from the murders, although he was tried but was not convicted,” Thorne said.

Thorne said some people think that Luella and Victor planned the murder because they were having an affair but something went wrong, resulting in Luella’s death.

Bruce Cline, a radiological technician at Memorial Hospital of Carbondale and a founder of the Little Egypt Ghost Society, has a different theory — that Lola Droke, J.C.’s daughter from his first marriage, was responsible.

J.C. and Victor owned a coal mine together, but Cline said they had recently dissolved their business partnership. It was also rumored that Victor had been written out of J.C.’s will, he said.

But Lola was in Memphis at the time of the murders, Jones said.

He said there is no way J.C. would turn his back on someone at 11:40 p.m. unless it was someone he trusted.

“Who’s going to come into a house, commit murder and then go, ‘Oh, I better turn off the lights.’ It’s someone who’s used to turning off those lights,” Jones said. “Why would [Luella] do it? Promise of love and passion? Promise of escape? Resentment? You’re married to this old guy … and you’re just absolutely tired of him.”

Victor’s wife’s reaction to the murders leads Jones to believe she killed Luella.

“She has a nervous breakdown, she can’t go to the funeral or the visitation. She can’t see anyone,” Jones said. “She keeps to herself, even when her husband has been arrested by the sheriff.”

Jones said he has heard various other theories about who killed the couple, including one that someone from the Charlie Birger gang — a well known bootlegger in southern Illinois — or Al Capone’s gang killed them.

The coal mines J.C. and Victor owned could’ve been a front for bootlegging, Jones said, which could be the motive for either of these gangs — especially during Prohibition.

Another debate surrounds whether the house is haunted.

Thorne has toured the house but said he has never experienced any ghostly activity.

“There are too many people who have said stuff has happened to them for me to discount it,” Thorne said. “But I personally have never seen anything.”

Cline said that a front porch swing moves even when there’s no wind.

Brandy Morse, Jones’ fiancee said she has only experienced one incident.

She said she had gone down two or three steps on the back stairwell when she heard something.

“I heard the creepiest, weirdest moan I’ve ever heard. Like it was right in front of me … it came out of nowhere,” Morse said.

Jones said he has had quite a few encounters in the house.

His first paranormal experience occurred one evening nine years ago after he had finished moving furniture into the house. He said he had returned from dinner with a friend and made his way up to his study.

Jones walked by the room and noticed the DVD player was illuminated and stuck on the word “WELCOME” on the screen.

“The most important thing I noticed was that it was unplugged,” he said.

Jones said the next incident was at the top of the stairs that lead up to the room where J.C. was murdered. A door into the hallway from the main staircase slammed in Jones’ face, he said.

“I had a little come-to-Jesus moment with whatever was in here, saying, ‘Your name may be on the house but mine’s on the deed and if someone’s gotta go, it ain’t gonna be me,’” he said.

Still, Jones said he is not afraid of the ghosts in the house.

“It’s just a matter of personal belief,” he said. “I don’t believe that whatever is in the house can harm anyone but that’s also religious belief.”

Over the years, Jones has allowed paranormal groups such as the TV series “Ghost Lab” into the house to investigate.

With the help of their technology, Jones said he has figured out that there are at least two separate hauntings going on in the house.

The first is the residual haunting of the murders.

He said he thinks a “pissed off Mrs. Hundley” is trapped in the back staircase.

“They’ll leave recorders in the back stairwell and Mrs. Hundley will curse up a storm,” he said. “There are things that she said that would make sailors blush.”

Jones said he originally bought the house to turn it into a bed and breakfast, but he has grown tired of the attention it attracts.

“I can’t grow flowers without people noticing it, I can’t yell at the kids or curse at my dog without, ‘Oh, you should’ve seen! He was losing his mind,’” he said.

He said putting the house on the market caused an uproar in Carbondale. Each year, Jones said, about 150 people who want to tour the house.

“They’ll just come and knock on the door and go ‘Well, we read about you and we wanted to know if we could see inside your house,’” Jones said.  “And it’s like, well, it is my house. If I am in a good mood, I will give them a tour. If I’m not, I will tell them to go away.”

Jones said he has had offers on the house and is working on a deal right now but hopes the owner will let the legend live on.

As for the ghosts, Jones thinks they wouldn’t mind if he sold it.

Managing editor Abbey La Tour can be reached at [email protected] or on Twitter at @LaTourAbbey.