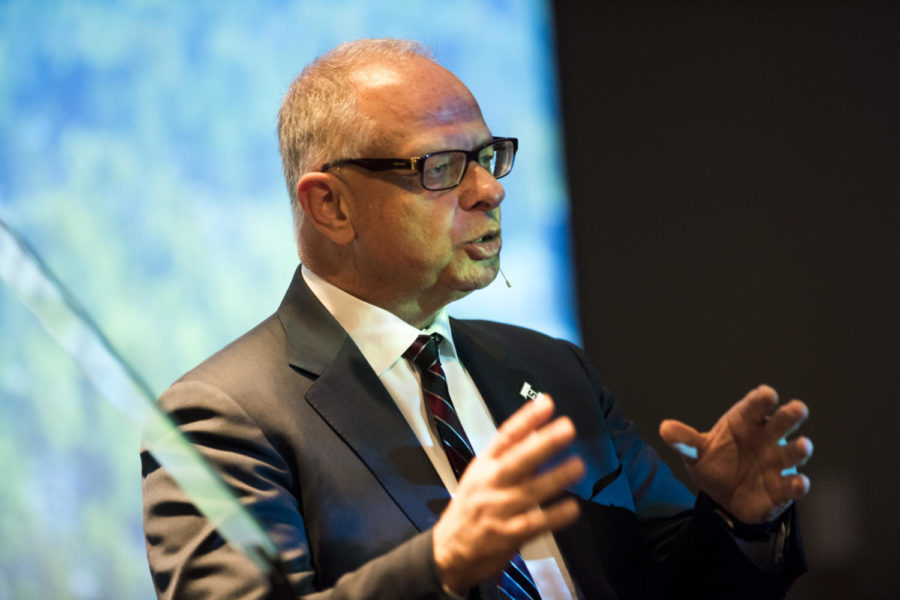 The university has eight colleges with 44 departments and schools, including the School of Law and Medicine.

During the question-and-answer session, Montemagno faced pressing questions from students and faculty addressing his proposal.

Lauran Schaefer, a graduate student in communication studies, asked Montemagno what evidence he had to back up his claim that prospective students look at the school’s academic structure to determine whether they attend the university, rather than student reports saying they experienced racism and sexism on campus.

Schaefer is referring to the elimination of department chairs, which distribute resources to their specific department. In the chancellor’s proposal, chairs would be eliminated with the department and would be replaced with directors, who would then be in charge of distributing funds within their specific school.

“That prevents our programs from being the type of programs that attract students,” Montemagno said. “The problem is we have a financial bureaucratic structure in place that prevents faculty from engaging in the innovation and entrepreneurship that they want to put into compelling programs.”

Montemagno said another reason chairs are to be eliminated is due to lack of faculty. In place of department chairs, there will be faculty members who serve as program directors for the programs that make up the school and school directors who will be selected by adhering to the university’s hiring policy.

“If we had the proper academic programs for them [students] to come they will be here, otherwise why are they not here,” Montemagno.

Kennedy Byers, a senior studying Africana Studies and biological anthropology, said as a minority student she does not feel accepted on campus and low enrollment has nothing to do with the academic structure.

Byers said the proposed cut to Africana Studies that was presented in the financial stability plan released in July is an example of this.

USG president Joshua Bowens acknowledged Africana Studies was not mentioned in Montemagno’s proposal and said all students would be affected by eliminating the department.

“Core curriculum includes Western civilization history but nothing about African history. This is huge because in order to be a comprehensive research university we must remember that we are competing with the world,” Bowens said. “How can we talk about changing SIU and it’s principles but forgetting about a huge group of people that love the department and are hugely affected by it if it disappears?”

Bowens asked why Africana Studies wasn’t valued enough to be included in the proposed reorganization.

Montemagno said in his proposal all courses, including majors and minor, would still exist but would be moved into programs rather than departments which are under schools.

He said in his proposals some programs are in discussion for possible elimination.

A minor and major in Africana studies would be moved to the School of Humanities.

Victoria Hammond, a senior studying geology, said she wanted to minor in Africana studies but advisers told her it was not worth her time.

Montemagno said he wants to incorporate the essentials of Africana and Latino studies into the core curriculum that all students will take.

“Given the climate that you talk about, it’s not working, and my job here is how to make it work,” Montemagno said. “I’m relying on the talent and the people we have in our diversity council.”

Montemagno stressed the importance of having every student be exposed to multiculturalism and to be able to work with people of different cultures.

He said the reorganization is to ensure that the university completes their mission of access and opportunity, innovation in research and teaching focused on nurturing student success.

Montemagno said by organizing departments into schools and realigning programs there will be “inherent synergy,” a concentration of talent that is coupled with limited faculty numbers, and provides a “clearer window” to prospective students and others to see the educational opportunities provided.

As Montemagno presented his proposal, he asked faculty and staff to think about where the university can combine offerings to free up resources to invest in building stronger programs and create new programs.

Increasing enrollment to 18,300 students is the main focus for the chancellor. He said during his speech that enrollment creates revenue that can be reinvested and the academic reorganization will generate savings.

Through these changes, Montemagno told faculty they’ll get to redefine their work.

Sara Beardsworth, an associate professor of Philosophy said she has experienced a similar change at a university in England.

“I watched that university turn from a polytechnic to become a university back into a technical studies university,” Beardsworth. said.

Beardsworth said during this change the humanities were lost and it was merged into London Metropolitan University. She said the university lacked the disciplines that reflect values of critical citizenship.

Montemagno said he plans to integrate the humanities across the university so more students receive those classes.

Montemagno said the university is a nationally recognized comprehensive research university and depth has been stripped through a lack of resources and faculty.

“This school structure you see here is the starting point for rebuilding,” Montemagno said. “From the outside it begins to look like we’re bigger and better.”

Montemagno said this is a chance to bring faculty together in harmonious ways to redefine the university and begin to grow. As an example, he wants a top ten national program in each of the schools.

He said people should give feedback about the discussion regarding his proposal, but he also said anyone who identifies a problem should provide a solution.