After evacuations are lifted in California fires, some residents return home to wreckage: ‘It’s gone’ 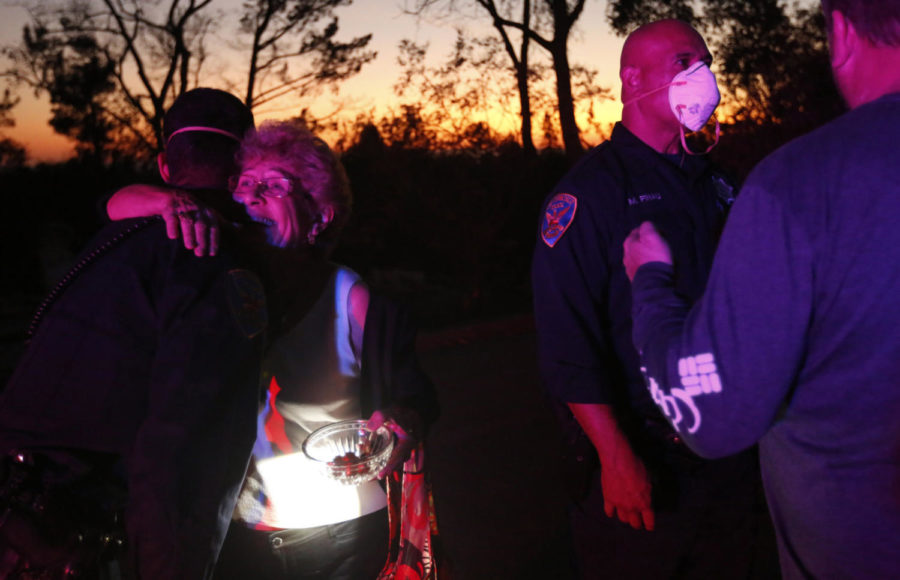 Gerry Miller, 81, hugs San Francisco Police Department Officer Gary Loo to show how grateful she is to find her home still standing as residents were allowed to return to their homes on Sunday, Oct. 15, 2017 in the Mark West Springs area in Santa Rosa, Calif. (Genaro Molina/Los Angeles Times/TNS)

Kimberly Flinn emerged from the darkness of Carriage Lane late Sunday night, her shaking hands illuminated by the flashing blue and red lights of a police car.

Flinn and her partner, Jaiden Campbell, had just returned from a tour of their house in the Wikiup neighborhood of Santa Rosa — their first visit since they evacuated Monday morning.

Hours after police lifted the evacuation orders for a small area of the Larkfield-Wikiup area, dozens of residents sped through the darkened streets to check their houses for damage or to see what was left to salvage.

Police officers erected barricades across Carriage Lane and checked residents’ identification before allowing them to enter on foot. They hoped that barring cars from the area would discourage residents from spending the night in homes that still don’t have electricity.

During the days they were out of the house, Flinn and Campbell saw a satellite photo of their street, showing every house obliterated. It still didn’t prepare them for the extent of the damage. One car was half melted. Little was left standing beyond the house’s major support beam.

In the wreckage in their frontyard, Flinn found a white ceramic butterfly she had placed in a planter to commemorate a little boy who was killed in an accident. Butterflies, she said, were reminders that friends and family who have died are thinking of you.

The butterfly came out of the fire sooty, but unscathed.

Kurt and Tracy Leinhaupel strapped on their headlamps to inspect their home on Greenview Drive, where they have lived for 25 years. The couple spent the week on tenterhooks, fearing a spot fire or the smoldering redwood mulch across the street could ignite the neighborhood.

As Leinhaupel drove up Carriage Lane, he spotted a house that was completely destroyed, and thought, “That’s it — everything’s gone.”

Then he turned the corner and saw his house still standing.

Gerry Miller, 81, was so thrilled to find her house still standing that she hugged the police officers on scene, then offered them Halloween chocolates from a tiny glass dish.

The fire had destroyed the shrubs and a portion of the fence along the edge of her property, but her house appeared to be intact.

“I’ll see you tomorrow,” Miller shouted, as she walked toward her house. “I’m coming back to water my house plants!”