The Way Down Wanderers combine styles and bring folk to town 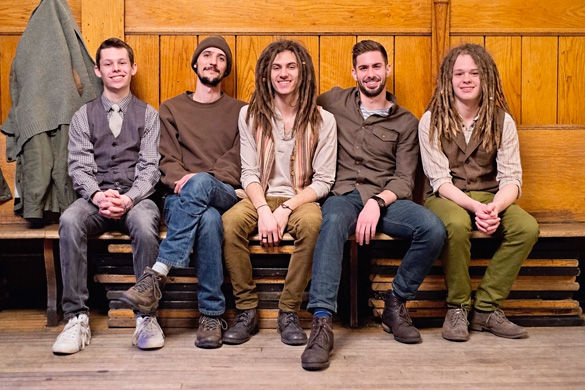 We live in a fast-paced world. Everyone has their own ways of relaxing. Some go for easy listening to soothe their soul.

Alternative folk band The Way Down Wanderers out of Peoria create vivid imagery through their lyrics and combine multiple backgrounds in jazz, classical, and spoken word.

“It’s our first time playing in Carbondale so we are pretty excited to break into the scene a little bit,” Thompson said.

Montalbano said the band is familiar with acts such as The Whistle Pigs from previous shows in the Carbondale area.

The band has a folk sound that includes influences from all of the members’ distinct musical backgrounds, they said.

“We are definitely influenced by a lot of different things,” Krause said. “We all have different influences that range from spoken word music to classical to rap to hard rap to americana.”

Montalbano said Perrilles is very heavy into jazz music, bringing another element in to the mix.

The writing and recording process is also positively affected by their musical backgrounds.

“The classical background really comes in when Ben comes in to arrange a lot of the material, as well as John being classically trained on fiddle really helps a lot with different instrumentals,” Krause said.

Even with all different backgrounds, one thing that remains constant between them all is their love for music.  Even when they’re not playing a show they are still playing music with acoustic instruments as much as possible, Williams said.

On the band’s website, there is a section called the “Tour Log” which allows the fans to feel a little closer to the band while they are on the road.  The log consists of a few journal entry style posts, photos and videos from the band in different places on tour.

“Sharing funny stories from the road like having a tire blow out and spending the night in a small town in Michigan … it is really for our fans that really want to know what’s going on,” Montalbano said.

Whether the venue is small and indoor or outside and expansive, the band enjoys playing where the people are, Krause said.

“Three weeks ago there was a gig here [Peoria] at the library and people were jumping up and dancing so its fun to find places you wouldn’t expect people to know the music,” Williams said.

The band is always working on new material, Thompson said.

The Way Down Wanderers are working on an album now that is due to release next summer. The band also debuted a new music video for its song “Your Will is a Wildflower” this week.

The band has released a five song EP earlier this year titled “Path to Follow,” which is available on iTunes and on their website http://www.thewaydownwanderers.com/listen