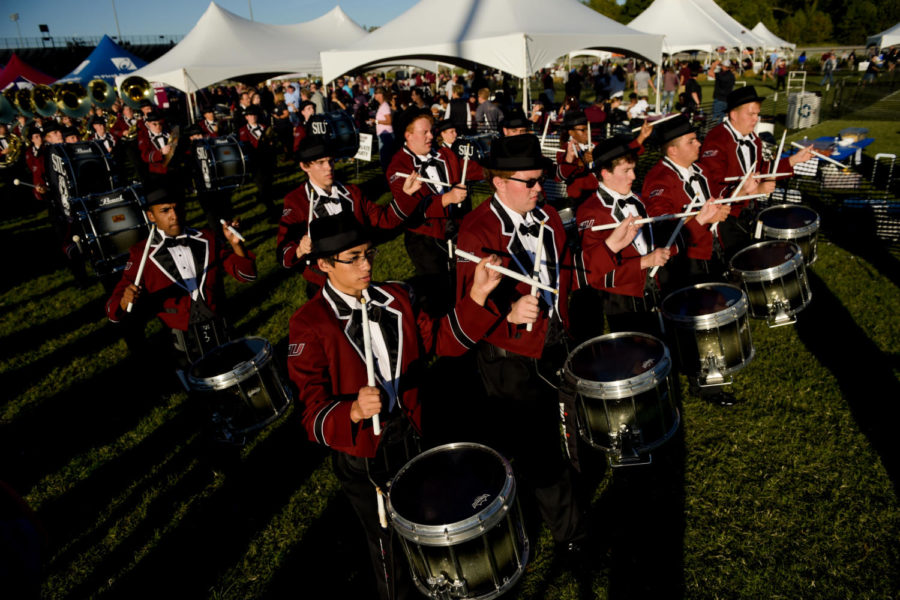 The Marching Salukis’ drumline performs Saturday, Sept. 30, 2017, before the Salukis’ matchup against the University of Northern Iowa Panthers at Saluki Stadium.

The familiar sounds of brass, woodwinds and beating drums fill Saluki Stadium each weekend as the football team battles on the gridiron: the rhythms and melodies of the Marching Salukis.

The 57-year-old ensemble has become known as one of the most unusual, innovative and entertaining college marching bands in the nation, according to former director of athletic bands Mike Hanes.

Founded in the 1960s by Don Canedy, the Marching Salukis have entertained and pushed the envelope on college marching bands, all the while being dubbed the “best dressed band in the land,” a term coined by Hanes.

Tuxedo jackets and homburg hats were adopted as the original uniforms for the ensemble as the military-style marching drills morphed into big band and rock music arrangements in the early 1960s.

“At that time many of the marching bands came from the ROTC programs on campus,” Hanes said. “The [bands] had a very militaristic approach, marching in a very regimented style.”

Canedy had the idea that if the band were to play contemporary and jazz music they shouldn’t look like a bunch of soldiers, according to Hanes.

The traditional uniform and hats were adapted to their current, more modern design alongside the opening of Saluki Stadium in August 2010.

In the band’s early years, it explored various unique musical arrangements during its halftime performances, including drum carts on wheels — which was called “Saluki Rhythm on Wheels” — and adding the nation’s first marching violin and piano to the band’s rendition of the “Star Spangled Banner,” which was called the “Saluki Salute to America.”

The majority of the band’s members come from outside the School of Music, according to George Brozak, the director of athletic bands.

“You don’t have to be a music major to be part of this ensemble,” Brozak said. “Only 15 of the members are music majors – the diversity and interest in the students that have enjoyed [playing] in high school and continue [to do so] here are a positive thing.”

Members say the Marching Salukis is a team effort and a place where strong friendships are built.

“Being in the marching band has been a fantastic experience – you make so many friends the first day,” junior music education major Justin Niles, of Galesburg said.

For Madeline Richardt, a sophomore from Lombard studying forestry, her fellow band members are some of her best friends.

“Everyone in the trombone section are all good friends,” Richardt said. “I honestly didn’t expect that coming into college band –  I was expecting everyone to be prissy and say things like ‘This is college band, take it seriously.’”

The mutual love of performing is one of the best things about the group, said Riley Wagner, a sophomore from Bismarck studying computer electrical engineering.

“The baritone section tends to be very chill and we never have anyone complaining,” Wagner said. “You can tell everyone enjoys what we’re doing and that’s one of the most fun parts about being there.”

Apart from the social experience, several members of the Marching Salukis say their experience with the band has improved their technique and playing ability.

“It had been about 2 years since I have been in a marching band and the advancement I’ve seen from high school into the college band is fantastic,” Niles said.

The Marching Salukis take the field each homecoming football game with SIU alumni joining the current members during a special halftime performance.

Photography and multimedia editor Brian Muñoz can be reached at [email protected] or on Twitter at @BrianMMunoz
To stay up to date with all your Southern Illinois news,  follow the Daily Egyptian on Facebook and Twitter.