Beaten by husbands or boyfriends, these women turn to male movers for new start 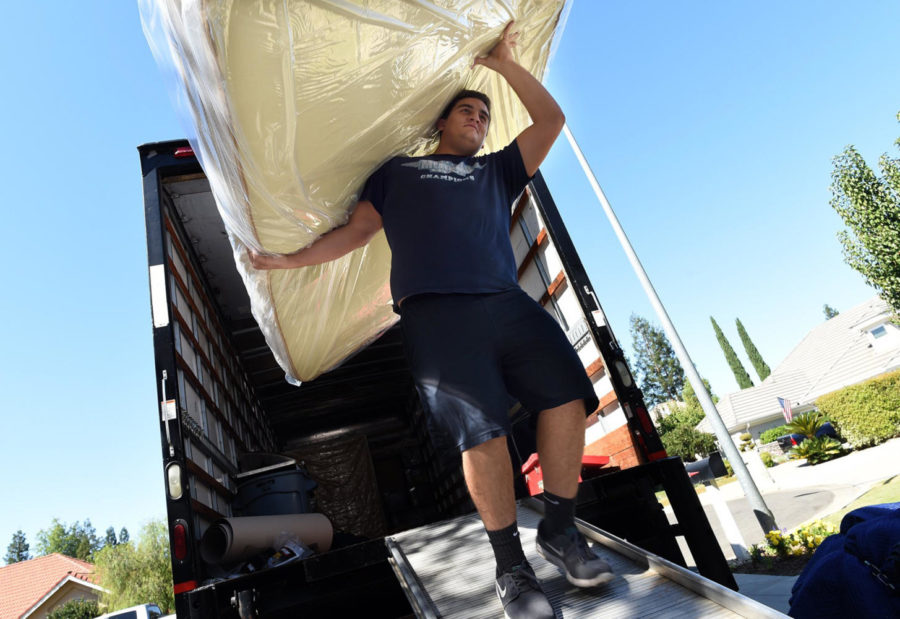 By Carmen George | The Fresno Bee

Meathead Movers employees sometimes move furniture with a mugshot in hand of a suspect charged with domestic violence. They’re told to keep an eye out as police patrol nearby. The people they help during these moves — victims of domestic abuse — are beyond thankful for the bravery and service Meathead Movers provides at no cost.

“A lot of times they feel like a prisoner in their own life,” says Justin Pieper, operations manager for Meathead Movers’ Fresno office. “It’s good to be able to offer that out.”

Meathead Movers has provided free moving services for more than 100 people in Fresno since 2015 when the company partnered with the Marjaree Mason Center, which provides support and shelter for victims of domestic abuse.

Many women flee an abusive relationship with nothing and receive furniture for free through Wings Advocacy Fresno.

One Fresno woman who recently received these services was routinely beaten by an ex-boyfriend. The woman, who isn’t being identified for her safety, starts to cry when asked if there’s anything she wants people to know about domestic abuse.

“I’ve been through a lot,” says the mother of four. “I’m just ready for a better day, a good future.”

She now lives in a safe home with her 16-year-old daughter who recently had a baby. Meathead Movers brought them a big potted plant, a painting, two full-size beds, a dresser, a headboard, a table, and chairs — all new additions to their new home.

“It’s helping me and I’m thankful,” the woman says. “It’s not just a house, it’s a home with the furniture.”

Meathead Movers has done around 500 moves for domestic abuse victims in California since partnering with its first shelter in 2001. The company has offices in Fresno, the Central Coast and Southern California. Its owners, who started Meathead Movers in San Luis Obispo, did a number of these moves before they officially partnered with shelters and made it part of their company’s mission.

“When Aaron and Evan Steed established Meathead Movers in 1997 as high school students, the frantic phone calls just started coming in from victims looking to flee dangerous domestic violence situations without financial means,” says Caroline Callaway, a spokeswoman for the company. “One day, the situation turned volatile when the abuser came home in the middle of the move.”

Police were called after that man started screaming at movers and threw a toaster oven.

Despite the potential danger, this work helping victims of domestic abuse is what drew Theo Stratigos to the company.

Stratigos called it a “deal breaker” in deciding to work for Meathead Movers. The crew coordinator in Fresno wants people to know that domestic violence doesn’t just affect women and children. One move that stands out in his memory was helping a man and his children. He said when the children received some basic necessities, “it looked like they were getting the coolest new toy.”

Meathead Movers is now challenging 10,000 businesses to help victims of domestic abuse through their nonprofit #MoveToEndDV by pledging to make a donation or provide a free product or service for a shelter. So far, 211 businesses have taken the pledge.

There are thousands of people who need help in Fresno. In 2016, the Fresno Police Department received 5,351 domestic violence calls, and the Fresno County Sheriff’s Office, which investigates in areas not covered by police departments, reported 1,029 such cases. The Marjaree Mason Center helped 5,700 adults and children last year.

“They take a dark time and try to shed some light,” Stratigos says of the center. “Being a part of that process is a cool experience.”

The community service also appears to have helped Meathead Movers’ bottom line. The company was proud to announce in August that Inc. Magazine included Meathead Movers in its 5,000 list of the fastest-growing companies in America for the sixth year in a row.

“Sometimes it’s emotional, it’s verbal, it’s psychological,” Pieper says. “Those are a lot of the ones that go unrecognized. … Don’t be afraid to talk about it and recognize it and call it out when you see it.”

Another victim of domestic violence that Meathead Movers recently helped, a Fresno mother of three girls,relied on Movers to place one of her bookcases several times around her new home until they found the perfect spot. This kind of service is the norm, says Laura Lopez, housing services manager at the Marjaree Mason Center.

“They are just so nice. They wrap the furniture. They take care of it like they would any other paying customer,” Lopez says of Meathead Movers. “For them, there’s no difference. I really, really appreciate that.”

Lopez calls their work “life changing.” That clients “get to go into a new place and it’s furnished and someone provided the move — it’s a good way to start.”