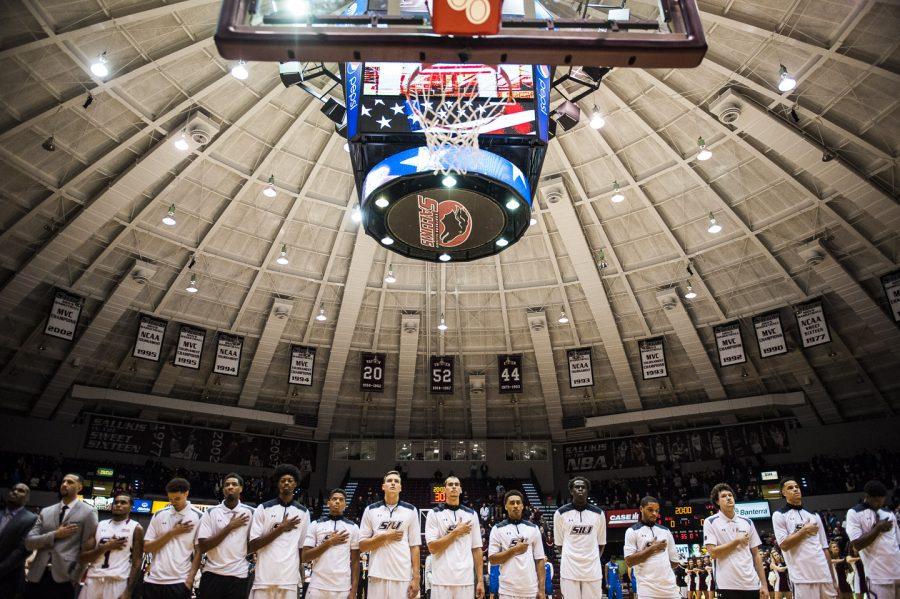 In August, the Missouri Valley Conference announced that former Saluki cager Darren Brooks — one of the most decorated players in school history — will enter the MVC Hall of Fame in 2018.

Brooks — a member of SIU’s basketball team from ‘00-05 – will be officially inducted on March 2, 2018, in St. Louis, Missouri. The inauguration ceremony will serve as part of the annual MVC Arch Madness Tournament.

“Commissioner Doug Elgin called me and told me about the induction,” Brooks said. “I was shocked but excited and happy. Growing up playing ball, you don’t think about things like that. Finding out you’re in the Hall of Fame with players like Larry Bird, Xavier McDaniel and Mike Glenn was just shocking.”

In his time at SIU, Brooks became one of the most decorated players in school and conference history.

In the 2004 and 2005 season, Brooks earned recognition as the Larry Bird MVC Player of the Year and the Defensive Player of the Year. The St. Louis native is the only player in conference history to win both awards in the same season twice.

Brooks was selected to the SIU Hall of Fame in 2011 and named as one of the ’25 Greatest Salukis’ in program history when chosen as part of the men’s basketball All-Century Team in 2013.

“I’m thankful for all the great honors,” Brooks said. “Growing up playing in a small town in St. Louis, I never envisioned any of this. I just wanted to play, have fun and see where I could go with basketball. To win these awards is just like icing on the cake and I’m grateful.”

The honors seem to be a formality in rewarding Brooks for his work as SIU’s top performer in four stellar seasons that lead the Salukis to consecutive berths in the NCAA tournament.

As a redshirt freshman coming off the bench in 2002, Brooks played part in helping the Salukis reach the Sweet Sixteen under head coach Bruce Weber — who now is at the helm of the Kansas State University program.

“Darren is just an amazing story,” Weber said. “He really wasn’t recruited very highly. We were very fortunate to have him come to SIU. Darren always went about his business and did whatever he had to do to be successful.”

Brooks joined Weber for one more NCAA Tournament before the coach left for the University of Illinois. The Salukis reached the Tournament in Brooks’ junior year with head coach Matt Painter and again the next season under head coach Chris Lowery — who now serves as an assistant to Weber at KSU.

“DB was probably the quietest, yet competitive person I’ve ever been around,” Lowery said. “He always put you in awe of the things he could do because he was such a smooth player.”

As humble as anyone, Brooks never took credit or let his success go to his head.

Not only did Brooks excel on the court as an athlete, he also put emphasis on successfully earning a degree when in college. After he earned a Bachelor of Science Degree in Health Education, Brooks achieved a 4.0 GPA in graduate school.

“I just tried to be disciplined,” the Hall of Famer said. “My mother was a school teacher and education was important. In grad school, I was very focused and dedicated and wanted to make my family proud and represent my family and SIU as best as I could.”

After his playing career ended, Brooks made good use of his college degrees. Now in the Dallas, Texas area, he works as an athletic director and a coach for the boy’s and girl’s junior varsity teams.

In addition to his roles in the school system, the SIU alum is the owner and head trainer at the Brooks Basketball Academy in McKinney, Texas. The goal of the Academy is to progress players as athletes and individuals.

“It’s great to give back everything I’ve learned through the years,” Brooks said. “It makes me happy to have parents talk to me and tell me how big of a blessing I have been to their child. Seeing kids that put in the same effort in the classroom as they do on the court — or a kid that was in trouble or had discipline issues turn it around and stay out of trouble — is what makes me happy.”

Using the fundamentals and experiences that he has acquired from St. Louis, SIU and Europe, Brooks incorporates his knowledge with the idea of teaching “FUNdamentals” to his students.

“I felt an obligation to open my own academy,” Brooks said. “I learned so much about basketball when I was a kid when I was just playing, running around and having fun. I saw kids lacking fundamentals and knowledge of terminology in youth games that I would go watch. I thought if I had an opportunity to help kids reach a higher level, so why not do it?”

Coach Weber said he is pleased of where his former player has found himself in life.

“You’re always proud when one of your guys gets a degree,” Weber said. “Now he gets to do what he loves helping with basketball and helping other kids coming up. It’s a proud moment as a coach — almost as a dad — that you helped them be successful in life.”

As for Brooks, the induction ceremony will come and go, the trophies and medals will someday rust, but the lives that he is changing and the legacy that the Saluki guard left at SIU will remain eternal.