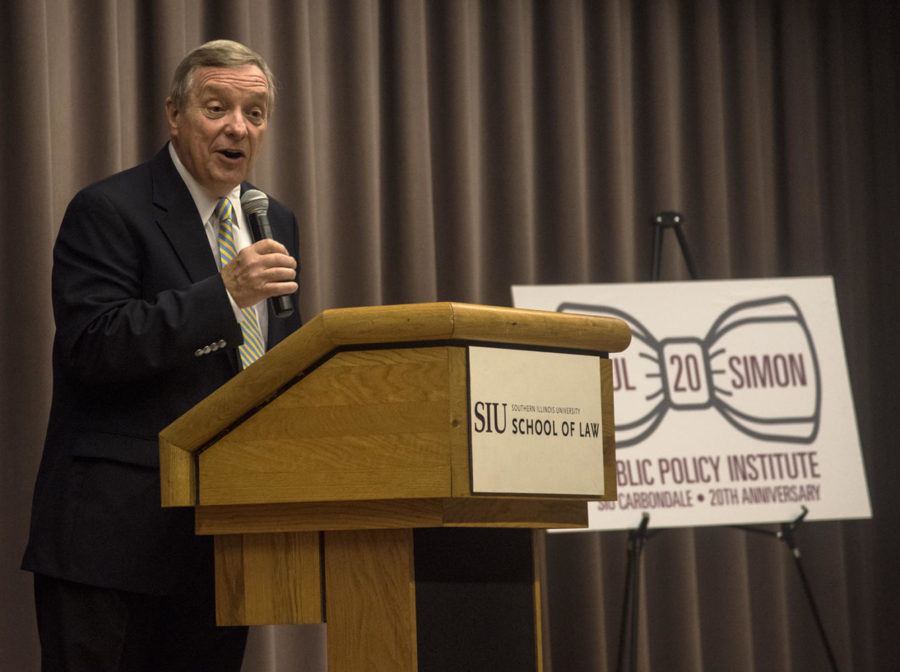 During a keynote address Tuesday at the law school, Sen. Dick Durbin recalled a memory of a time when Illinois Poet Laureate Gwendolyn Brooks spoke at the Paul Simon Public Policy Institute in 1998.

Brooks stuck around after her speech to meet and talk with every member of the audience, Durbin said. There was a lengthy line, but a student choir quickly organized and provided entertainment for the people standing in the line.

“Everyone was thrilled, but no one more than Paul,” Durbin said. “I think it’s because he watched his students help others; helping others was all the legacy Paul Simon ever really wanted.”

Durbin was the keynote speaker for the Paul Simon Public Institute’s 20th anniversary lecture series. Simon was mentor to Durbin, he said, and Durbin took over Simon’s Senate seat 20 years ago when Simon retired.

“He was a visionary,” Durbin said. “He saw connections that a lot of people missed … Paul saw answers to problems.”

In 1998, Simon published his book “Tapped Out: The Coming World Crisis in Water and What We Can Do About it.” Simon saw the issues that would follow water scarcity early on, Durbin said.

“He understood water scarcity is not just a humanitarian issue, it is a global moral imperative,” said Durbin.

Durbin said the World Health Organization reported that by 2025, about four billion people will live in regions hit by water shortages.

Durbin also acknowledged the opioid crisis that he said is plaguing the entire nation.

He said crisis began with pharmaceutical companies and the Drug Enforcement Administration allowing excessive amounts of prescription pills to be produced.

“Today, addiction is known as a disease to be treated, and that is a giant leap in thinking,” Durbin said.

Finally, Durbin addressed the housing crisis in Cairo. He said the situation is fraught with challenges and he will try to convince Housing and Urban Development Secretary Ben Carson to find humane housing alternatives that will allow residents to remain in Cairo.

“The people who live in this public housing in Cairo did nothing wrong,” Durbin said. “The people who managed the Alexander County Housing Authority did something terribly wrong.”