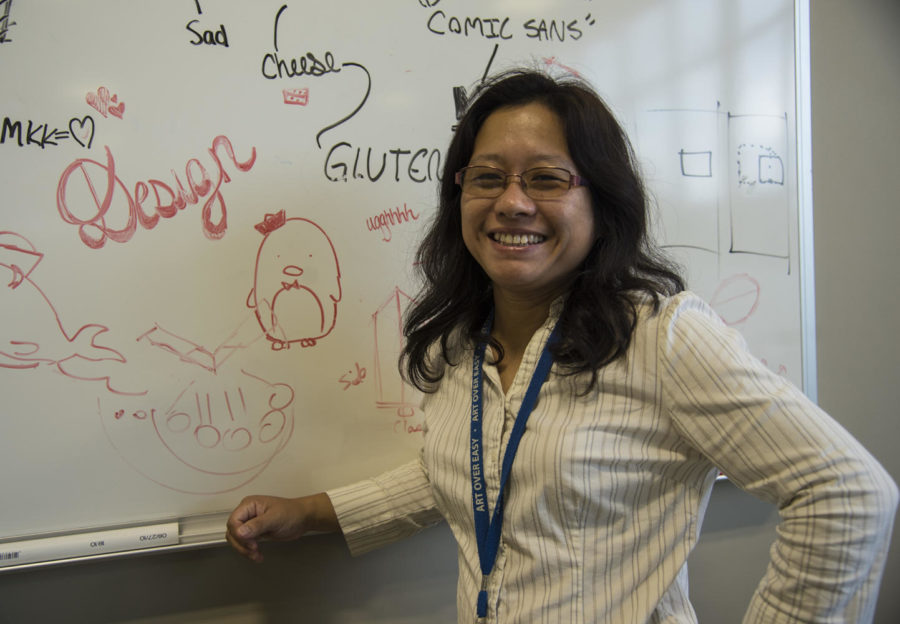 Tao Huang discovered her passion for design as a teenager growing up in Guangzhou, China.

The assistant professor of design decided to start a comic book club at the age of 16 with her sister and a friend in 1992, which Huang said she believes was the first of its kind in China.

Because of China’s strict publishing laws, she said the venture was risky.

“We had to be very careful with what we were going to say in the publication,” Huang said.

The group wasn’t able to apply for a publishing license because they couldn’t afford it, and because comics were so new in China at the time that she said they likely wouldn’t have been approved anyway.

Huang said they took the risk of being prosecuted or having their comic books confiscated because they were young and didn’t realize what kind of trouble they could get into.

“We didn’t publish anything that was against the government, so we didn’t feel that we would get in trouble ourselves,” Huang said. “We actually put some self-censoring on ourselves because we didn’t want to get into trouble.”

Now, with over 15 years of experience in the field, Huang said she could probably work with anyone on any kind of design.

Throughout her career, she has worked in design research, product design, interior design and other areas, but she said she specializes in sustainable design.

She said she loves the work because the field is constantly changing and developing.

“It keeps you on the edge all the time because you have to be really mindful of what’s going on and what’s new in terms of new terminology, in terms of the art world,” Huang said. “It’s very hands-on.”

When she was attending the Guangzhou Academy of Fine Arts for graduate school in 1999, she opened a bookstore with a couple of friends that she met through the comic book club.

At the same time, Huang was also part owner of a post-production advertising company, and she decided she wanted a change; she wanted to move to the United States.

She started attending Virginia Tech in 2003 as a PhD student. She said it was a very similar to Carbondale, with a diverse amount of people that she still keeps in contact with today.

Huang got her first job as a professor at Columbia College in Chicago in 2007, where she worked for almost eight years. She said the transition from designing in China to designing in the U.S. was difficult, especially from a teaching perspective.

“I was not brought up in this society, so I have no idea what my students don’t know or what they do know … I spent a few years trying to figure that out because I didn’t know what they were learning when they were in high school,” Huang said.

By the time she came to SIU about two years ago, Huang said she had learned how to overcome those cultural barriers.

Her students said one of the biggest things she’s done as a professor was planning a trip for them to visit her hometown in China for a design camp last winter.

Anthony Bux, a senior from Algonquin studying industrial design, has taken two of Huang’s classes and went on the trip to China.

Bux said Huang helped students from different countries connect despite cultural differences by helping them work together on their designs.

He said incorporating her multicultural design perspective is something Huang also does in class.

“She does have that x-factor of she knows the difference between cultures and how one product can affect the whole world and not just the U.S,” Bux said.

“She listens to us and allows us to work in ways that are best for us,” Booth said.

Huang said part of her method isn’t all about teaching students what to learn; it’s also about how they learn.

“I want to make my students to be visionaries, innovative and actually happy about what they’re doing, and also collaborative,” Huang said. “I think that’s very important as well. … I’m not just teaching them skills, I’m teaching them how to think.”

Booth said Huang does this by not always giving students direct answers to questions, and instead guiding them through the process of figuring it out for themselves.

“She’d help us investigate our solutions and our concepts, but she won’t completely tell us the way,” Booth said. “A lot of that will make us as students turn to research more or to ask each other and figure it out for ourselves.”

Bux said Tao always encourages her students to learn outside of the classroom.

Huang said she came to SIU because of its similarities to Virginia Tech and the excellence of the work done on campus by faculty, staff and students.

“I think this university has a long legacy of doing a lot of great things,” Huang said. “This kind of environment is absolutely amazing, and I don’t think you can replicate it very easily elsewhere.”