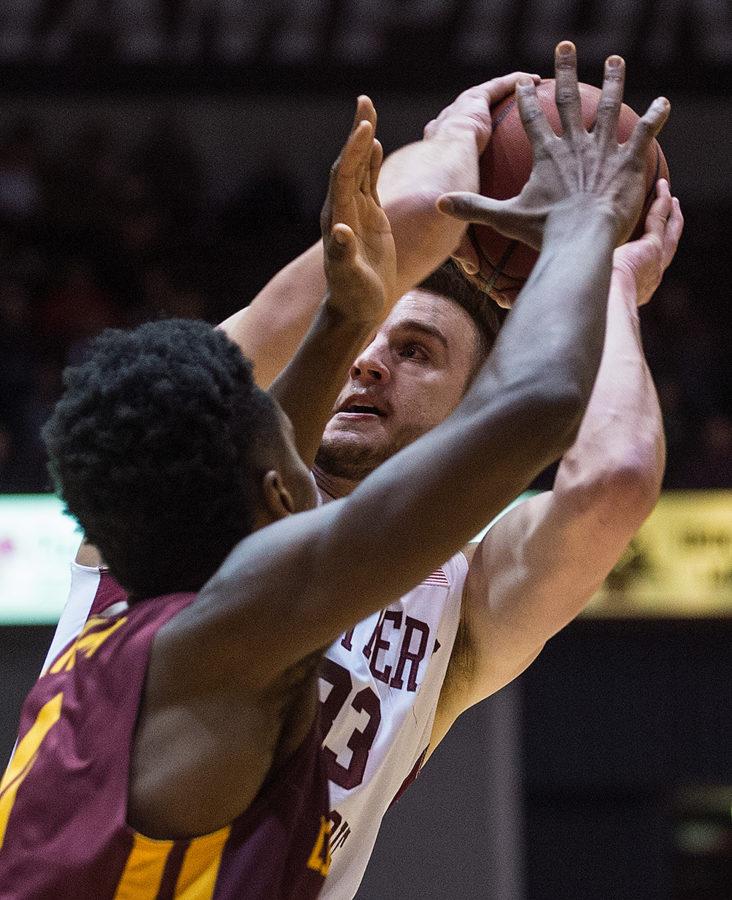 For SIU alumni Sean O’Brien, a long flight is a small price to pay when it comes to climbing the ranks of professional basketball.

O’Brien spent four years on the court at SIU before signing a professional contract with the Korihait basketball team of the Korisliiga league — the top professional basketball league in Finland.

O’Brien took his coach’s advice and finished his career at Southern ranked eighth in rebounds, 12th in blocked shots and 25th in scoring all-time, proving his value on both the offensive and defensive side of the ball on his way to earning 2017 Missouri Valley Second-Team All-Conference honors.

His impressive play and work ethic helped him develop connections at SIU — most notably Autry — that were vital in getting the Mundelein native to where he is now.

“Coach Autry is the one that actually set me up with my agent, Benjamin Stevic,” the former Saluki said. “A couple of offers came in from Finland and Switzerland. I had to evaluate both options and Finland just happened to be a better opportunity. It’s a better league and the top league in Finland.”

The transition from America to Finland required O’Brien to make cultural adjustments. He said such a drastic move gave him a “new found appreciation” of the United States.

“I was in culture shock the first two weeks,” O’Brien said. “The weather’s cold and rainy. I’ve gone frisbee golfing for fun a couple of times but there’s not too much to do, which is OK because I can just focus on basketball and there aren’t any distractions.”

Luckily for the rookie, he has found guidance from some more “well-traveled” veteran players on the Korihait squad. Former Western Kentucky Hilltopper Juan Pattillo, for one, has helped make the transition simpler for O’Brien.

“He’s mentored me and taken me under his wing,” the former Saluki said. “Out of all the guys on the team, I’m probably closest to him. Some days get rough and lonely all the way out here and he always reminds me that it will all be worth it.”

Through the first three games of his professional career, O’Brien has already begun putting together an impressive stat line.

Playing primarily as Korihaits’ starting small forward, he leads his new team in points per game (16.7) and minutes played per game (33.3) while contributing significantly in rebounds and assists.

O’Brien’s impressive play has led to him being featured on a soda can distributed in local Finnish grocery stores. The soda is called “HaiCola” — translating to “Shark Cola” in English.

“Our team put the American players on soda cans,” the forward said. “I haven’t drank it yet. I’m not a big soda drinker so I think I’m just going to keep it on my shelf.”

Getting his face on a soda can is one way for O’Brien to get his name out to other professional European leagues and organizations, but the rookie wants his play on the court to be what represents him.

“I want to give it my all and do my best and hopefully I can put up some good enough numbers to where I can move up and get into a higher league,” O’Brien said. “ Korihait didn’t make the playoffs last season, so it would look really good on my resume if we could bring the team back to the playoffs. Plus, it would be a fun team experience to go to the playoffs.”

While he is excited to be playing professionally, O’Brien is not only focused on this season but the development of his game and career in future seasons.

“It’s cool to be a pro but I’m still not where I want to be,” he said. “Finland is a good place to start, and hopefully I can play well here and get to a higher European league where the teams are more well known and you get to travel around from country to country. I hope to use this a stepping stone to further my career.”

While O’Brien toils in the European professional ranks and strives to one day return to the U.S. to play in the NBA, there are people back home in the states that continue to root for his success — especially coach Autry.

“I absolutely love Sean. I’m really proud of him,” the SIU assistant coach said. “I’m proud of his toughness. He’s a really talented player, but I’m proud of who he is and that he has traveled halfway across the world, and still be who he was at SIU in another place. I’m really excited and happy for him.”