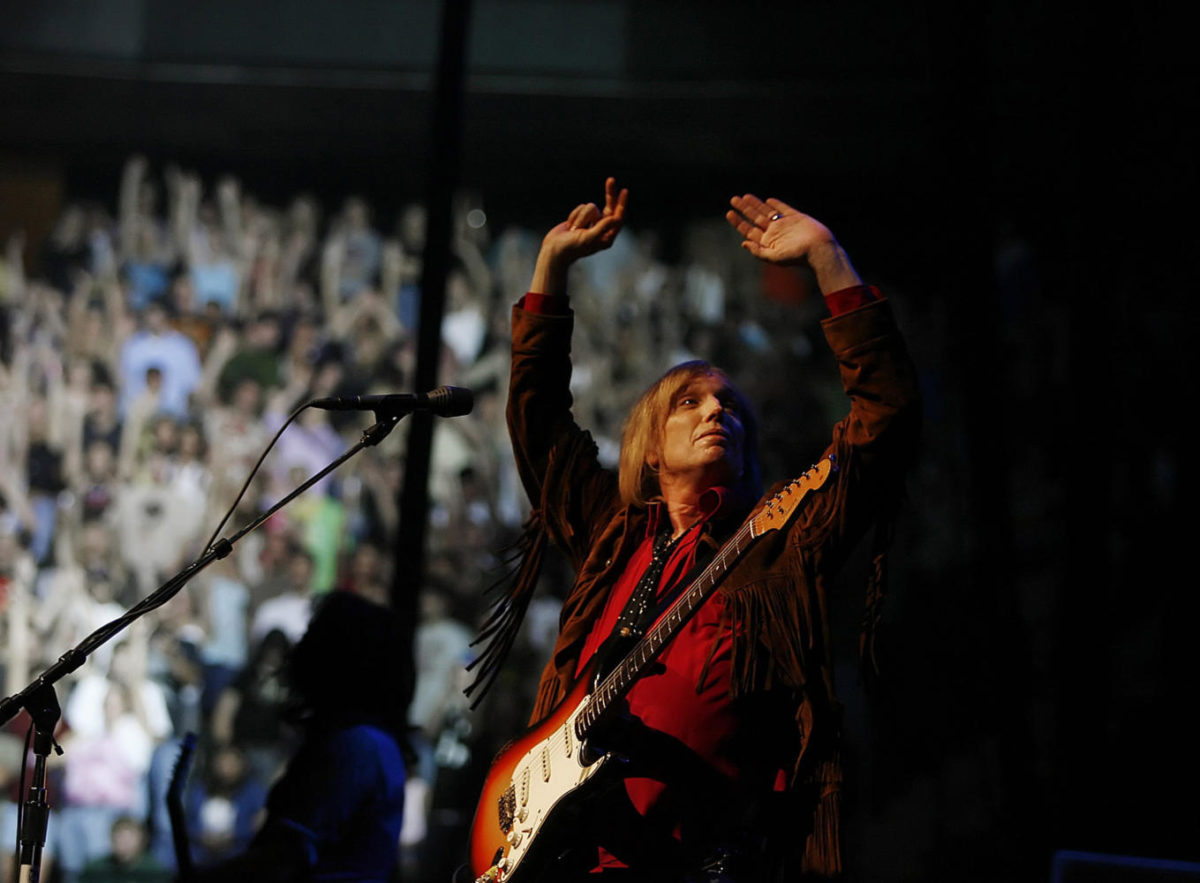 This is not the Tom Petty story that I had intended to write.

Though I was more than thrilled to catch up with Petty, whom I had interviewed before, I had no clue that this would turn out to be the last, for me and for him — that he would die just a few days later at age 66.

This is not the way things were supposed to happen.

When I sat down with Petty in the outer room of the cozy but fully equipped recording studio at his home above Malibu beach, the idea was for him to reflect on the wildly successful 40th anniversary tour he and the Heartbreakers had wrapped less than 48 hours earlier at the end of three sold-out nights at the Hollywood Bowl.

It was a triumphant stand particularly rewarding to Petty, a Florida transplant who considered himself and his band mates California adoptees. He said as much from the stage each night, noting how the Heartbreakers, although composed entirely of musicians born or raised in and around Gainesville, Fla., had been born at the Village Studios in West Los Angeles.

“This year has been a wonderful year for us,” he said now, sipping a cup of coffee he’d just poured at 4:30 in the afternoon and sinking into the plush sofa. Above his head hung a framed illustration of his departed friend and boyhood idol George Harrison, created by artist Shepard Fairey and presented to Petty by Harrison’s son, musician Dhani Harrison. “This has been that big slap on the back we never got,” he said, referring to the popular, critical and financial affirmation that wasn’t always apparent throughout the group’s hard-working history.

But he did not see it as the end. There was supposed to have been so much more to come. Should have, would have, could have come.

Petty was excited about producing a second album for the upstart L.A. rock band he’s been championing the last couple of years, the Shelters.

“They’ve been on the road for a year, and we got together recently,” he said. “They played me some of their new stuff, and I was just blown away.”

He was looking forward to continuing his involvement with the Tom Petty radio channel for the SiriusXM satellite radio service, including the show he organizes and hosts personally, “Tom Petty’s Buried Treasure,” in which he picks songs that he loves.

“I love doing my ‘Buried Treasure’ show,” he said, ever the rock star in his military-style jacket, loose fitting pants and aviator shades, even while espousing fan-boy sentiments. “It keeps me listening like I used to do. I always listen. I could come home and I would spend the rest of the night just lying on the floor or the sofa listening to albums. It was like a movie to me. I still do really, and doing the radio show ensures that I’ll be sitting there listening.”

After six rewarding but also physical demanding months on (mostly) and off (hardly) the road, Petty was supposed to get a moment to take a deep breath, relax and enjoy the return to domestic life with Dana, his wife of 16 years, and the rest of their family, including his two adult daughters, Adria and Annakim Violette, from his first marriage; Dana’s son, Dylan, from her previous marriage; and their 4-year-old granddaughter, Everly Petty.

Even though the notion of kicking back in a hammock sounds antithetical to everything he’s ever believed in, or practiced, he said, “I just have to learn to rest a little bit, like everyone’s telling me. I need to stop working for a period of time.

Still, he confessed, “It’s hard for me … If I don’t have a project going, I don’t feel like I’m connected to anything. I don’t even think it’s that healthy for me. I like to get out of bed and have a purpose.”

Petty always had a purpose, and a man like that, a man with a purpose, should have had more time — weeks, months, years — to practice what he called fishing and others call songwriting.

“It’s kind of a lonely work,” he said, “because you just have to keep your pole in the water. I always l had a little routine of going into whatever room I was using at the time to write in, and just staying in there till I felt like I got a bite.

“I compare it to fishing: There’s either a fish in the boat or there’s not,” he said with a laugh. “Sometimes you come home and you didn’t catch anything and sometimes you caught a huge fish. But that was the work part of it to me. … I just remember being excited when I had a song done, and I knew I had a song in my pocket, I always felt really excited about it.”

I was one of many blindsided by the news of his death on Monday. As we sat, just a few days earlier, he was vibrant, full of enthusiasm, still the epitome of the coolest rock star you’d want to sit down for a chat with. He laughed easily and often, occasionally dropping his voice into a softer mode when outlining just how precious his band, his music and his family were to him. The only gripe he had was about the hip he cracked shortly before the tour started, which he was now finally addressing.

Everyone assumed — fully expected — there would be more time for this fisherman to add yet more brethren to the bevy of beloved songs that have integrated themselves into American popular culture. Classic-rock staples including “Breakdown,” “American Girl,” “Refugee,” “Even the Losers,” “Learning to Fly,” “Listen to Her Heart,” “Here Comes My Girl,” “Walls,” “Mary Jane’s Last Dance.”

“To go into a studio and hear a band play (one of his new songs) for the first time is always exciting,” Petty said. “And usually when they play it, it became something I hadn’t even pictured. Yes, I love the studio. I love the studio as much as I love playing live, easily. I’m pretty much in one every day, and I’m still at that.”

Interviewed collectively backstage at the Hollywood Bowl as they prepared to saunter out into the dark, onto that stage, for the finale of their tour, the Heartbreakers — lead guitarist Mike Campbell, keyboardist Benmont Tench, multi-instrumentalist Scott Thurston, bassist Ron Blair and drummer Steve Ferrone — were unanimous in their expressions of surprise that anyone might think they were ready to put the Heartbreakers into mothballs.

When I visited Tench two days later on my way to see the head Heartbreaker, a broad smile came to his face as he quipped, “Tell Tom we should get the band back together!”

Petty laughed heartily when the sentiment was relayed. “He would too,” Petty said. “He’d leave tonight, probably. You know, I love it. It’s amazing that we’re still doing it, and doing it well.”

No, this wasn’t supposed to be the end of the road for Tom Petty and the Heartbreakers, even though the group’s namesake talked about what might cause that to happen — one day, perhaps, far down the line.

“We’re all older now,” he said softly. “Then we’d stop. I think that would be the end of it, if someone couldn’t do it.”

Until then, he said, there would be no talk of any proscribed retirement day — for this singer, songwriter and guitarist, or his band of brothers.

“On the back side of your 60s, most people aren’t working,” he said with an air of pride. “This keeps us young. I think it keeps me young.”

He was still wearing the thick beard he had grown during the tour and he smiled through it.

“When I see people I knew from earlier in life and I run into them now, they’re very different than me,” he added. “And they look different. I think this has kept us all thinking young and feeling young.”

Not that he had any near-future plans for a tour as extensive as the 53-show 40th anniversary run.

“It is grueling to do a very, very long one,” he said. “This was quite a long one. It’s sometimes physically hard. But then the lights go down, you hear the crowd and you’re all better. You feel like, ‘OK, let’s do it.'”

Besides, Petty already seemed to have weathered his allotted bout of infirmity during August when he came down with laryngitis and had to postpone a few shows.

Did the incident spook him?

“Yeah, because I don’t think I’ve missed a show in many, many years,” he said. “It freaked me out so bad, because it came out of nowhere. … My doctor said ‘I don’t think you’ve been sick — I’m looking in my records — in over 17 years, since I’ve seen you sick with anything. And I’m always like, ‘I don’t get sick.’ But (stuff) happens.

“My doctor said, ‘Despite great evidence to the contrary, it seems you’re human,'” he said with a laugh. “But I take care of myself on the road. If you’re a singer, you’ve got to be responsible, it’s a physical thing, you have to be in shape. It’s athletic. I have to make sure that I get enough sleep, that I eat right, that I don’t abuse my voice. Don’t talk too much. Don’t go to the bar and talk for three hours if you have a show the next day. I’ve learned that it’s just instinct, it’s built into me from all the years of touring.”

After six months on the road, Petty was supposed to get time to forget about those rules, just a little.

“The only happy thing about being off the road is I don’t have to worry about keeping myself ready to go the next day,” he said.

If this were the story I had intended to write, if everything had gone the way it was supposed to, Petty and the Heartbreakers would still be looking down the road at more chances to engage in the unique form of worship known only to those who’ve spent decades together in recording studios, cramped vans, dingy bars and anonymous hotel rooms.

“The thing about the Heartbreakers is, it’s still holy to me,” he said with no air of loftiness or pretense. “There’s a holiness there. If that were to go away, I don’t think I would be interested in it, and I don’t think they would. We’re a real rock ‘n’ roll band — always have been. And to us, in the era we came up in, it was a religion in a way. It was more than commerce, it wasn’t about that. It was about something much greater.

“It was about moving people and changing the world, and I really believed in rock ‘n’ roll — I still do,” he said. “I believed in it in its purest sense, its purest form. … It’s unique to have a band that knows each other that long and that well.

“I’m just trying to get the best I can get out of it,” said Tom Petty, head Heartbreaker and fisher of music, “as long as it remains holy.”

That, in reality-induced retrospect, is the part of my story on Tom Petty and the Heartbreakers that is, and remains, exactly as it was supposed to be.