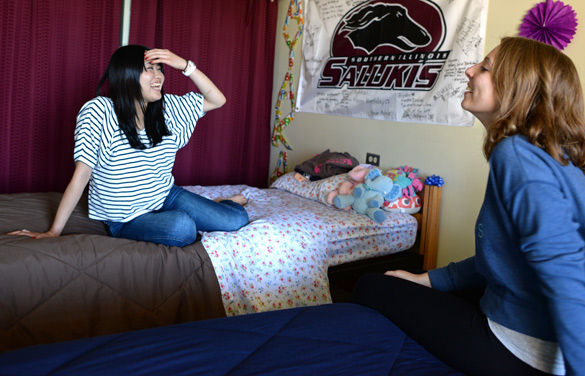 If living with a stranger from a different town is not hard enough, international students at SIU face an even harder challenge.

With the most new international students at the university since 1985, people from different countries who speak different languages have been randomly paired to live together.

Two students who came to America as a part of an SIU study abroad program, Ayaka Shibuya, a junior from Japan studying liberal arts, and Ananas Engler, a junior from France studying history, moved into Neely Hall together this semester.

“When I arrived, I just saw her name on the door and I guessed she was Japanese, and I was expecting a lot of differences, but there isn’t so much,” Engler said. “It’s the same for our friends also who are international students, they are alike even though one of them is Spanish and the other is Japanese.”

Tom Saville, associate director of the Center of International Education, said international students might face difficulties adapting to everyday life in the U.S.

“No matter where it is or what direction you are going in, it could be difficult,” Saville said. “Going outside and looking back makes [international students] learn a lot more about where they came from.”

Engler said her transition to the university was easier than expected. She said she was worried about making friends, but is relieved Shibuya is there to talk to.

Saville said connecting with local people as an international student can be difficult.

“Integrating with the host culture is one of those things everyone has to overcome,” he said. “I always tell the students who are going overseas they have to take the initiative – to reach out and meet new people.”

Engler said she understands she has to make an effort to adjust.

“We live such a big change, I don’t feel like it’s a pain,” Engler said. “I just have to adapt, everything is different.”

The roommates said classes in France and Japan are structured differently and have no discussion sessions.

Engler and Shibuya said they want to travel the country during breaks before heading home after the semester.